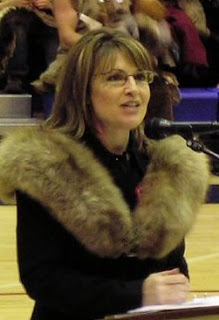 The efforts these past nineteen days, of Outside reporters, up here investigating the true Sarah Palin, are coming into more stark contrast with the efforts of the team of GOP slime attorneys and political hitmen sent up here by the McCain campaign and RNC that same late August day.

The reporters, by and large, have come and gone. The GOP attorneys are here until election day, as they do more subversion of our state's ways and of our excellent constitution, in a few days, than a horde of Exxon attorneys were able to do to us and our founding document in a generation.

Who is going to detail this all-too-obvious comparison first? Perhaps, Progressive Alaska, but I know Shannyn Moore is investigating it in more depth. And Celtic Diva, and Mudflats.

Here's another obvious linkage, provided by the non-MSM bloggers in Alaska, as we coordinate with bloggers and writers worldwide:

How come Sarah Palin could come up with $50,000 to redecorate the Wasilla mayor's office to look like a New Orleans madame's office, but couldn't come up with the same amount of money to fund more than four years of forensic exams for Wasilla rape victims?

Carney, Palin's estranged former mentor, and others in city hall were astounded when they found out about a lavish expenditure of Palin's own after her 1996 election. According to Carney, the newly elected mayor spent more than $50,000 in city funds to redecorate her office, without the council's authorization.

"I thought it was an outrageous expense, especially for someone who had run as a budget cutter," said Carney. "It was also illegal, because Sarah had not received the council's approval."

According to Carney, Palin's office makeover included flocked, red wallpaper. "It looked like a bordello."

Although Carney says he no longer has documentation of the expenditures, in his recollection Palin paid for the office face-lift with money from a city highway fund that was used to plow snow, grade roads and fill potholes -- essential municipal services, particularly in weather-battered Alaska.

Carney confronted Mayor Palin at a City Council hearing, and was shocked by her response.

"I braced her about it," he said. "I told her it was against the law to make such a large expenditure without the council taking a vote. She said, 'I'm the mayor, I can do whatever I want until the courts tell me I can't.'"

"I'll never forget it -- it's one of the few times in my life I've been speechless," Carney added. "It would have been easier for her to finesse it. She had the votes on the council by then, she controlled it. But she just pushed forward. That's Sarah. She just has no respect for rules and regulations."

And back in May, 2000, when the Alaska Legislature had to devote days crafting legislation to overcome another Palin "shocker," the Mat-Su Valley Frontiersman wrote:

In the past we've charged the cost of exams to the victims insurance company when possible. "I just don't want to see any more burden put on the taxpayer," Fannon said.

Should our progressive Alaska bloggers hold our breath until the Anchorage Daily News catches up to this story? Not a chance, folks.

We have important work to do.
Posted by Philip Munger at 6:58 PM

I have not read this anywhere but here! Why hasn't this hit mainstream news?
"'I'm the mayor, I can do whatever I want until the courts tell me I can't.'"
Can you imagine what she will do as VP? Or god forbid...Pres? OMG!
Why has no one investigated this, before?
L from Cali

You are doing a fantastic job of exposing the facts, and this better go, live the the media.
McCain/Palin is the same as ush/Cheney/Rove. Lies, cover-ups and half truths. Looks like Gov. Palin got to where she is today, by throwing everybody that does not agree with her under the bus.
We have to have a Gov. that works together and not put ambition ahead of their ego's. Love this blog and spread it everwhere.

You all are regurgitating and munching on hearsay and half-truths. There is no "journalism" here. This is little more than a gossip blog of community hens pecking out the day's fodder. What are you going to "investigate"? How is redecorating an office akin to "throwing people under the bus"? Individuals paying for the fall-out after a crime is no different than what happens when any crime is committed. Advice for Alaska - sit down, shut up and get ready for your governor to lead a nation rather than getting your Alaskan long-shorts twisted over wall paper and he-said-she-said issues.

Thanks for all the reporting you're doing here. The news is slowly filtering out to the mainstream media and people are realizing what a huge misstep McCain made. Keep up the good work!