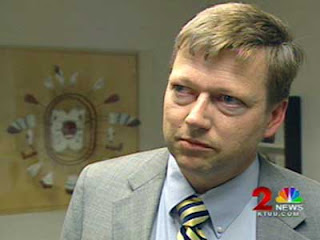 Since Monday the McCain camp has stepped up its personal attacks against Alaskans. They’ve continued their D.C.-style tactics against neighbors in this small state. The game plan is to find an excuse to stop our Legislature's Troopergate investigation, and hide evidence McCain’s folks really don’t want to surface before November’s election. It’s been a little Karl Rove, and parts Laurel and Hardy. How else can you explain the following?

Last Friday the Attorney general’s office promised state witnesses would comply with subpoenas the Legislature issued last week. This Tuesday the Governor's Attorney General flip flopped, and announced that state witnesses wouldn’t comply because, well, and I’m paraphrasing here - he’s changed his mind. And in what has to be an idea hatched after a 4th Martini at Chilkoot Charlies, Governor Palin's attorneys have filed a motion to dismiss the ethics claim she filed against herself two weeks ago.

Yup. She really filed a complaint against herself.

Tuesday she said she’s discovered, after a thorough investigation of herself, that she’s done nothing wrong. Does anyone know how to get a hold of Jon Stewart and Tina Fey?

It's silly season up here in the far north, but this week's moves are aimed at one thing: John McCain's effort to find cover for being disingenuous. See, before Governor Palin’s nomination for the Republican VP spot, she did the honest thing. She admitted the evidence - of roughly 20 contacts between her staff and husband with Public Safety officials, seeking the firing of Governor Palin's former brother-in-law - might lead a reasonable person to the conclusion that the she misused her office to fire a state employee. So when Alaska's Republican-led Legislature called for an investigation, she did the honorable thing and said she and her staff would comply. She denies any wrongdoing.

So they have engaged in daily maneuvers to attack, as disloyal to the McCain campaign, anyone who wants the investigation to move forward. They've now attacked two well respected prosecutors, and perhaps the state's most highly regarded law enforcement official - the Public Safety Commissioner she hired, and then fired, Walt Monegan.

Every day this week McCain operatives have sung the same tune. Today a guy with an East Coast accent, who knows nothing about Alaska, stood in front of a McCain-Palin banner to lead the attacks against people he doesn't know. At press conferences on Monday and Tuesday campaign staffer Megan Stapleton spit vitriol to repeat her argument that this investigation is really a “Democratic” attack on Governor Palin.

Here are a few things they failed to say. There are a few small facts that make it hard to style this as a Democratic investigation. One is that Alaska is a Republican State. We have a Republican Governor and a Legislature of 34 Republicans and 26 Democrats. This summer the Legislature's Legislative Council voted 12-0 (8 Republicans and 4 Democrats) to hire an investigator, and appointed Democratic Senator Hollis French, a well-respected former prosecutor, to find an investigator. Governor Palin stated she and her employees would comply with the investigation. French then hired Steve Branchflower, a former DA who most recently was hired by legislative Republicans to run the state's Office of Victims rights.

Over the last two days McCain's outside operatives have vilified former prosecutor Hollis French - as an Obama supporter who must have called this investigation to hurt the McCain ticket. But French was appointed to oversee the investigation by a 12 - 0 Legislative Council vote, and is probably the state's most respected legislator - by Republicans and Democrats alike. He’s so popular the Republican Party couldn’t find anyone to run against him this year.

They've called former Public Safety Commissioner Walt Monegan - a Native Alaskan who has served Republican and Democratic Administrations with honor, and put his life on the line in uniform - "insubordinate." Odd, given that when Governor Palin fired him she offered him a different job. I guess being "insubordinate" was a job requirement for the new position. And they've challenged the independence of an investigator and former DA, who has no animus anyone can find.

Those Swift boat ads taught the McCain folks that if you say something untrue enough times, it can stick.

My favorite moment of the week came when Governor Palin's attorneys filed a motion to dismiss Palin's ethics complaint against herself. Stay with me. Her attorneys have been buying the peyote, not me. See, on August 29 they needed to find a way to stop the Legislature's investigation. They tried asking the Republican leaders to call it off, and take one for the team.

But the Senate President and others honorably said no. So they came up with an argument that the State Personnel Board - 3 people appointed by Governor Palin and her Republican predecessor Frank Murkowski - had "exclusive jurisdiction" to investigate wrongdoing by the Governor. The Legislature wasn't amused. So Governor Palin then filed a complaint against herself.

To put icing on the cake, on Monday the Governor's attorneys moved to dismiss the Governor's case against herself. They said, and I loosely paraphrase again - that they tried really hard and just couldn't find any evidence that the Governor did anything wrong. OK. I can't believe I just wrote that. And I wish it weren't true.

All we can hope for is that members of the press will remember what they learned in journalism school. Not to repeat the spin of political operatives without reporting the truth. Not to write "he said she said" stories, and pretend the truth is somewhere in the middle. But to report the facts. No matter how you spin it, Governor Palin promised to comply with this Legislative Investigation. McCain's folks got her to change her position. And the Legislature that voted for the investigation did so on a bi-partisan basis. End of story. End of headline.

Over the next few days McCain's folks will try to get local legislators to step in line, out of party loyalty, and reverse their vote to investigate Troopergate. But many local Republicans, like Senate President Lyda Green, have so far refused to play those politics.

Stay for more from McCain's Campaign for "Change." They've tried to change the truth. They've succeeded at changing Governor Palin's promise to comply with this investigation. Let's see what they'll change next.
Posted by Philip Munger at 5:30 AM

RE: Republican Attorney General Talis Colberg asked that the subpoenas be withdrawn. He also said the employees would refuse to appear unless either the full state Senate or the entire Legislature votes to compel their testimony.

If these employees (however loyal to Stonewall Sarah) refuse to appear and testify to their knowledge of matters relating to this scandal, they should be held in contempt and thrown in jail. The pursuit of the truth should NEVER be trumped by partisan loyalty.

what would it take to change the constitution to make the AG an elected position as it is in many other states? if it starts with a petition drive, now might be a good time...

Thank you for summarizing this charade so well. What's happening in Alaska right now -- Rovian lies, character assassination, disdain for democratic principles and legal process, and setting neighbor against neighbor -- is a microcosm of what they've done on a national level for almost 8 years. If enough Alaskans fight back and expose them for the destructive, corrupt hooligans that they are, you will do the nation and the world a huge favor. Please Alaskans, keep fighting and keep telling the truth. The fate of democracy itself may be riding on the famed Alaskan independent spirit! Let's turn this Palin nightmare into a weapon to defeat the elderly, ill, and dangerous Mr. McCain.

Hey Et thanks so much for keeping us informed about the lying going on by both Sarah and McCain. Instead of the spin goes on try this from sony and Cher: http://www.youtube.com/watch?v=R1Gh24L8Obo

Thanks again ET keep up the great work exposing the lie that is
Sarah Palin,
Nahant