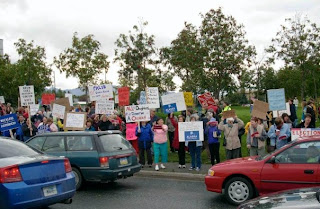 Buzzflash has been my browser home page for almost four years. The site describes various news stories around the country and world in thumbnail, as the stories break. You can hit a section in the upper right, allowing you to check out the most recent, filtering out older stuff. Very handy.

Each week, they award a progressive individual or group for an outstanding recent achievement. They call it their "Wings of Justice" Award. This week's award went to Alaska women, and to Charla Sterne and Ilona Bessenyey, the main organizers of last week's Loussac Library street event.

As a longtime Buzzflash reader and supporter, I'm going to take the liberty of printing their entire award editorial:

When Alaska Gov. Sarah Palin returned to her home state, she got a "welcome back" that she wasn't expecting. The Alaska Women Rejecting Palin protest grew from a handful of women talking about the perception of universal Alaskan support for Palin to an event that is being called the largest political rally in Anchorage history. Attendance estimates range from just under 1,000 to more than 1,500 people (less than 100 people were estimated to have formed a counter-protest in support of Palin).

You may feel that a simple protest shouldn't qualify people for awards. But after reading about ordinary Alaskans refusing to talk on record about Palin to reporters, it's clear that showing one's face at such an event could have negative repercussions. According to Amanda Coyne, who covered the event for Alaska Dispatch, state workers would not speak on the record, and some even felt the need to disguise their identities for fear of reprisal. But others actually feared for their own safety.

Charla Sterne and Ilona Bessenyey organized the event. Prior to the rally, they were identified on air by a conservative talk radio host named Eddie Burke, who called them "socialist, baby-killing maggots" and gave out their personal cell phone numbers. The women received angry, threatening, and profane phone calls from many of Burke's listeners.

Burke was suspended without pay for one week, but his radio station manager remarked, "We attempt to respect everyone's First Amendment rights, including Eddie Burke's." Apparently Burke's listeners don't realize that the right to peaceably assemble is in that same amendment.

We would like to reward the bravery of these two women as well as all the women in Alaska who were willing to show up and tell the rest of us in the lower 48 that just because she governs their state, Palin doesn't represent them.

And Alaska women.
Posted by Philip Munger at 11:10 PM

Here, Here!
There are so many brave Alaskans, and they are two amazing Alaskan women who would have had less protesters had they been nominated. Congrats, ladies!

Here's a little more grist for the Sarah Mill: http://tinyurl.com/49pr62

"The spawning of some Christian Right sects also creates an ideology to drive the shock troops willing to literally ‘die for Christ’ in places such as Iraq or Afghanistan, Iran or elsewhere that the Pentagon needs their services. That ideology has been used to build a fanatical activist base within the Republican Party which backs a right-wing domestic agenda and a military foreign policy that sees Islam or other suitable opponents of the US power elite as Satanism incarnate. How does Sarah Palin fit into this?"

don't be too harsh on eddie, he was giving your latest march some free publicity on his show yesterday.

I am not from Alaska so am so relieved to hear that the population of such a great state is not contented to this craziness with a 90% approval rating as some media sources would have the rest of the country believe. So thank you for posting your blog which makes me proud to be an American, proud to be a woman and hopeful that there will not be a McPalin Administration in our future!

Meet Nellie Neal Lawing, a trapper, hunter, and musher, who as legendary "Alaska Nellie" entertained tourists in her "Trophy Room" when the Alaska Railroad made it an official stop; Benzie Ola "Rusty" Dow, who became the first woman to drive the Al-Can highway delivering a load of cement from Fairbanks to Dawson in just seven days; and many other women who impacted the history of Alaska.
------------------------------
Angelinjones
OPINION LEADER