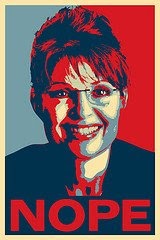 from an article by Markos Moulitsas, at Daily Kos:

Those who argued giving Palin a pass when she was wildly popular were wrong. While she's rallied the base and solidified states like North Dakota and Alaska for Palin, she is now toxic to independents and Democrats.

Voters have "learned [more] about Sarah Palin" because we aggressively investigated her record and encouraged the traditional media to do the same (and they did a pretty darn good job). Giving her a pass because she was "too popular" or because it "took the focus off McCain" would have allowed her positive narrative to stick, allowing her popularity to continue propping up McCain. As I've said before, this is a tactic straight out of Taking on the System.

Markos is right. Alaska bloggers, especially, along with our healthy alternative press, most notably the new Alaska Journal, can be proud of our role here. Not only have we brought important aspects of Palin's vast shortcomings to light, when and where our traditional media failed, we've provided a lot of material assistance to reporters coming here from Outside, looking for sources.
Posted by Philip Munger at 11:15 AM

Phil, have we seen any current polls reflecting Sarah's popularity in Alaska now that so much about her has been exposed? My guess is that her 80% approval rating isn't holding.

This whole campaign, has been a disasterous joke. How could that have happened? Thanks to the blogs. McCain did not vet Palin well enough, and she should have said, "no", I have children and Alaska to take care of. She is a train wreck for ego and arrogance. I have never seen anything like it. It is a soap opera. Now, McCain is keeping her from the press more. And hard to believe is the East Coast strange attornies running things. Palins policies on animals and Indians, is more than enough to turn me off, and then that isn't even getting to Women's issues. Guess she thinks of us women like the animals. We are on our own and survival of the fittest. Thank God for this blog and I can announce my frustrations. But, I can say the same of McCain for Arizona. He has always voted against the minimum wage going up, and never addressed an energy or transportation program. It is rugged in Arizona, as Alaska/ only a vast difference in temperature. So we love the place we live in for its ruggedness, but sure would be nice to have some ethical leadership to go along with that.

i don't think there is now or ever has been a particular shortage of ethical leadership and candidates. it's just that gradually over the decades, the state has shifted toward republican control. and that picked up steam 15 years ago and the mat-su and parts of anchorage were completely transformed. and the AK republicans organize and behave just like the national ones -- they act in lockstep and are effectively prevented from conscientious representation, even if they had a desire. people like lyda green have just reached their breaking point and their conscience has kicked in. [or else maybe they're like rats leaving a sinking ship?]
alaska corruption is a republican problem, make no mistake about that. and the answer is not to elect different republicans. maybe people are beginning to realize that now? i'm hopeful.

Just got our Alaska ballots in the post today in London. Gene and I have been asked by quite a few ex-pat Americans about the woman-who-cannot-be-named (a major reason I say I'm from Minnesota right now). We point folks to blogs in Alaska. Thanks for help in motivating voters here to alert voters back in the states.

As for us, we'll cancel out some overseas Republican military votes from over here!

Wish I were in London and you were here! Europeans seem to see both Obama (positively) and Palin (negatively) in far more realistic light than do Americans.

Thanks VERY much to you and all the other great AK bloggers. I've got a whole stack of you bookmarked will keep checking in even after November when at least for the rest of us, the Palin nightmare may be over. Keep at it people!

From a lower 48 American, I thank you Alaskans for doing a remarkable job on showing us the true Sarah Palin. You're right, bit by bit the truth came out and finally the MSM seems to see their role more clearly.

This may not be without personal cost for some of you. As a thank you, we in the lower 48 will cover your backs, and step up to the plate to help you if and when necessary.

Thanks, Alaskans for doing your civic duty. Please keep on to the bitter end and so will we.

Without hesitate, I bought eve isk , in the game I can find myself. I feel lonely, but I do not want to talk with anyone, so I buy isk . At present, think the happy day I spend in knight, I am eager to enter it, and buy eve online isk . Own eve online isk , it means that you own the life of happiness. So I will not leave cheap eve isk . It is the origin of the happiness.