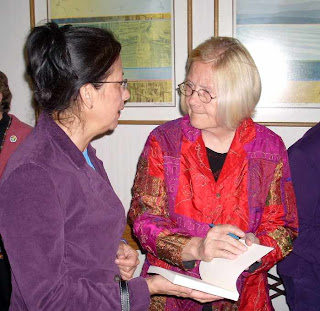 Col. Ann Wright's Alaska tour is concluding this weekend, in Southeast Alaska. Here's the remainder of her schedule:

Public Talk: Point of Contact: Perry Reeve 907. 225.0247
This evening, Mike Method will be interviewing Wright on his KBYR call-in show, from 7:00 p.m. to 9:00 p.m. Before that, on KBYR, Shannyn Moore will be discussing emerging union issues in Anchorage, like concessions the Anchorage Police Department is making, and the uproar at the Anchorage Hilton, concerning union hotel workers and their contracts.

Update: Shannyn will be interviewing author and Media Matter for America editor, Eric Boehlert during the 5:00 p.m. hour of her show. Boehlert's new book, Bloggers on the Bus: How the Internet Changed Politic and the Press, will be coming out on May 19th. Chapter 13, called Saradise Lost, is mostly about Alaska progressive bloggers, the role we're playing in reshaping Alaska political coverage, and some of the other things we do.

Regarding Wright's Thursday evening talk this past week, here's a summary from Tom Macchia, of Alaskans for Peace and Justice:

Here is a short report on Ann Wright's visit. I am sure that those most involved in the visit (many thanks for a great job) can add to this but I thought I'd get something out sooner rather than later, for those of you unable to make it.

There was a standing room only crowd at the Bartlett Democratic Club, over 70 people. Her speech was very well received and there were many good questions which she answered adroitly and thoroughly. Included in the audience were Diane Benson, Phil Munger and Alaska State Rep. Berta Gardner as well as union representatives.

The evening talk at UAA had an audience of about 40 people including many from the Palestinian community. Katy Parrish video taped the talk at UAA, Thanks Katy!

A basket was passed at UAA and over $200 was raised for a project to rebuild a playground for Palestinian children destroyed in the recent Gaza war crimes.

All of the books that we ordered were sold.

I thought that she exemplified and spoke well to getting involved in response the increasing disillusion that progressives are feeling with the administration and congress.

Col. Wright will soon return to Palestine with Code Pink.
She plans to invite Sen. Begich to go (at Phil Munger's suggestion). We might call and encourage him to join the Code Pink Trip.

When I mentioned the Green Party to her she said that she has heard that Cynthia McKinney will again be joining a relief flotilla to Gaza.

Alaska's progressive bloggers covered Alaska governor Sarah Palin's book deal, which has been speculated about since mid-November, but only rolled out formally this past week. The Mudflats covered aspects of the probable ethics law conflicts in the deal. Shannyn Moore's post on the deal was cross-posted at Huffington Post.

Progressive Alaska posted the first part in a series I will be doing on Adam Bellow, the editor who has been assigned to "help" Palin. I hope to interview Bellow, who I know, and David Brock, who worked with Bellow on books cast in a similar mold and designed for a similar audience as the one Bellow will create, and upon which Palin's name will be placed.

Progressive Alaska posted a poll on the book deal - the poll is still open.

By far, the best work on the book deal, and this includes bloggers, the Alaska press, the Outside press and other media, is the work of Lind Kellen, at Celtic Diva's Blue Oasis. Her most recent post and its comments clearly indicate that Palin's attorney general stand-in, Mr. Svobodny, is treading on very thin ice by giving Palin a clearance to write the book and be paid for it, while sitting as governor.

The Mudflats had two huge threads on possible titles for Palin's "memoir." The first book naming post for a Palin book was mine at DailyKos, back in November. But AK Muckraker held a contest this week that got almost 1,600 people to participate in the voting.

You can also vote at The Mudflats to help AK Muckraker get a scholarship to this year's Netroots Nation Conference, to b held in Pittsburgh, in August.

The current debate at the Anchorage Assembly on a gay rights ordinance has been covered by Celtic Diva's Blue Oasis, Bent Alaska, Henkimaa, and other progressive Alaskan blogs.

The flooding on the Yukon, Kuskokwim, their tributaries, and other Alaska rivers, due to ice jamming, continues. The best non-blog story that is recent, is Rena Delridge's from yesterday's Fairbanks Daily News-Miner. In the article, she details the work that Alaska's rural affairs coordinator, John Moller, is doing in devastated communities.

The best continuing flooding coverage by a progressive blog is at Anonymous Bloggers.

That's all I have time for. Back to deck rebuilding.

Ann Wright spoke in Binghamton, NY on the same speaking tour, so the following video is probably substantially the same presentation she made in Alaska: