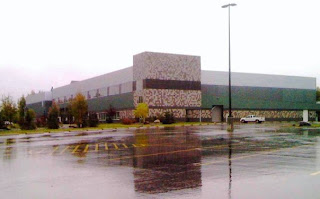 This is the Wasilla Sports Complex. It was created by Sarah Palin. Had the Municipality of Anchorage saddled its citizens with something on the same scale for their city as this was for Wasilla, it would have cost Anchorage's citizens $712,000,000.00. It would cost them $28,500,000.00 per year to maintain and operate. I'm not sure Anchorage's citizens would have been happy with this.

During Palin's six years as Wasilla mayor, the city asked for almost $100,000,000.00 in Federal earmarks, receiving 27 million. That would be the equivalent of Anchorage Mayor Mark Begich asking for $4.75 billion from the Feds, and receiving $1,282,000,500.00 in mayor-requested Federal earmarks. Neither the Palin or Begich figure includes money passed through budgets for education.

The Wasilla Sports Complex, pictured above, meets all Wasilla, Mat-Su Borough, State and Federal energy efficiency standards. So do all the other building projects Palin created as Wasilla mayor, that incorporated Federal funds.

Gov. Palin's assertion that Federal funds have "strings attached" is a new one. As many have observed, these strings never held her back from asking for Fed money in the past.

This rich irony would be more laughable if it weren't being accompanied by more signs every day that we can use all the energy efficiency help we can get in Alaska.

Palin's refusal to take the Federal energy assistance stimulus funds was covered in Alaska media yesterday afternoon, and this morning. Sean Cockerham updated his ADN poliblog entry through the afternoon, and The Anchorage Daily News turned it into a story this morning. KTUU TV had a segment on it yesterday:

Alaska's progressive bloggers connected more dots, and gathered in the layers of rich irony in the Palin refusal, though, far better than the ADN or KTUU could. And, when it comes to writing about Sarah Palin these days, if your structure refuses to deal fully with the irony and hypocrisy, you're not really telling the story. Covering the gibberish for what it truly is helps in painting the true portrait, also.

Shannyn Moore's essay, Dude, Where's My Governor's Head?!, on the refusal to take the funds is blunt:

Even though Juneau, Fairbanks and Anchorage municipalities are already complying with the federal building codes, Palin turned money down for weatherization and energy assistance to avoid the building requirements statewide. The governor of Missouri, Jay Nixon, negotiated taking the money without a statewide code. [!!!!]

Alaska has the highest energy costs in the nation. Alaska has two seasons; winter and construction. Now would be the best time for window replacement, weatherization, etc.

In a “bring it on” move, Palin dared the legislature to over-ride her veto. I just spoke to a state legislature about the chances of a special session being called. It is possible, if not, the next session is January 2010.

And AK Muckraker, at The Mudflats makes some more stark comparisons: 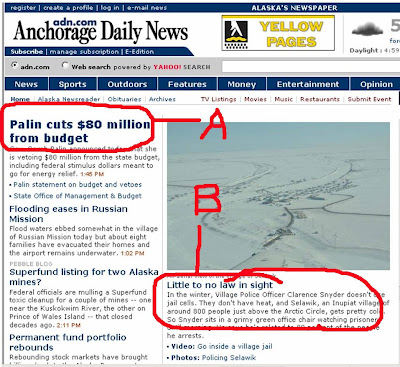 I can’t help noticing the irony of the front page of the Anchorage Daily News. It pretty much says it all, quite poetically.

A) Over there on the left in the headlines section it says:

Palin Cuts $80 Million from Budget - Gov. Palin announced today that she is vetoeing $80 million from the state budget, including federal stimulus dollars meant to go for energy relief.

B) And then right next to it under an aerial photo of the remote village of Selawik, it says:

In the winter, Village Police Officer Clarence Snyder doesn’t use jail cells. They don’t have heat, and Selawik, an Inupiat village of around 800 people just above the Arctic Circle, gets pretty cold. So Snyder sits in a grimy green office chair watching prisoners until morning.

A press release issued by the governor’s office touts:

“We submitted a responsible, fiscally conservative budget,” Governor Palin said. “Given the current revenue outlook and economic conditions, we must focus on providing essential public services, while continuing to invest in communities and resource development that will fuel our economy in the future.

I guess weather stripping, insulation and reduced energy bills just don’t fit into that picture. We don’t need to save money THAT way. Why keep it from leaking out of windows and doors when you can just use a red pen? We need to focus on resource development, not the resources that get wasted heating leaky buildings. I remember as a kid, my mother telling me in the winter if I stood with the door open, “We’re not paying to heat the outdoors!” My mom could teach the governor a thing or two. Apparently she has no problem with heating the outdoors.

Both Moore and AKM link to or quote extensively to statements made yesterday by Alaska legislators, state- and Federal-level, who contradict Palin's totally self-serving press release.

The only people lining up to defend Palin on this are going to be Eddie Burkes, Glenn Becks, teabaggers and people way to the right of Newt Gingrich.

Which is exactly why she did this, exactly who she is courting.

Alaskans, especially rural Alaskans, watching huge ice-jams coming their way, or cleaning up the worst debris in a generation? Uh, they've been left out of the picture.

Once again.
Posted by Philip Munger at 8:16 AM

Yep. EVERYONE needs to call their legislator demanding a special session NOW, to override her vetoes. And we all need to urge our friends to do the same.

Time for recall, too.

How much does a special session cost? And - if they override the veto, does he have to sign the letter to Obama necessary to receive the funds?

If the special session is in Anchorage will it cost less?

Look, if it takes a special session to keep the focus back to Alaskans, so be it.

Palin has no clue (good grief, I'm so tired of sayin that, but it is the only nice thing to say).

Maybe they can hold it in the Wasilla Sports complex?

You know, she is beginning to give me a headache. I simply do not understand how you wonderful progressive AK bloggers can do this day after day...after day.

I admire all of you and hope you enjoy your free time away from your puters!

Even if a special session is actually called, the fact remains that the Governor must first request the funds from Washington, no? So far I believe she has missed the deadline to do so. So they can vote all they want, but if she won't request the funds it won't matter. Likewise, she must advise the President directly that she is refusing funds. She has not yet done that, leaving the door open for more political maneuvering.

I just don't get what kind of hold this politician has over Alaskan taxpayers. Why don't they put a stop to this?

Palin is a narcissist and this is just punishment. She's punishing people who don't support her. She has no reason for it. She's grasping at straws to come up with something the makes even the slightest sense for the media. She really doesn't care.

And there is no veto to override. Palin simply isn't going to request the money. If the money comes anyway, then there can be a power struggle.

Which Palin is stupid to incite, given the drubbing she got over WAR and the senate seat.

I hope the voters are learning their lesson. Choose wisely next time. (I hope you don't live to regret Dan Sullivan too.)

i think something is wrong with your numbers, in the first part of the post.
it would be like anchorage asking for 4.75 billion and receiving 1.2 billion, eh.

thanks, clark. fixed it.

GINO has thrown Alaska/Alaskan's under the bus! She is pandering to her dwindling base, c4p, limpballs, etc. and The leg. needs to reconvene and write PO saying that GINO doesn't speak for the people of Alaska and prove it by impeaching her now, Before she causes more trouble.
Look at the terrible problems the villages had heating their homes last year. They could really use help and they are not getting it. Oh I bet her home is nice and warm in the winter, didn't she BRAG about it to a magazine while people froze?
Or hopefully scandal will blow up in her face and take her out.

It says in this article:
http://www.alaskajournal.com/stories/052109/loc_veto.shtml

"The Legislature could overturn the veto. Wielechowski said he would support a move to override her decision added it would take three-fourths support from members of both the Alaska House and Senate."
Why don't they do that? And while their at it impeach her!

You've done a great job uncovering and exposing Palin's hypocrisy and the shortcoming of the press coverage. Any chance you could get an opinion piece in the ADN or other media outlet?

I'm not an expert, but I also wonder if the flying monkeys at the ADN would allow anything that is not a pro-Wicked Witch puff piece.

I mean this with all respect, but blogging and talking are not going to take care of Palin! You need a more active approach. I don't know what that us but why are all of you Alaskans putting up with her?

OT
Curiouser:I read on another blog you were looking for GINO's Birth time?
I have it from a pretty reliable astrologer as 2/11/64 9:43pm
I would be interested to hear your comments about her chart :)

As winter approaches, we know high energy prices are going to be hitting our households. One of the best things we can do as Alaskans to stretch our family dollars further is to save energy – at home and on the road. [C]onservation … is key to the reduction of what is paid for energy bills. Everyone can take action to conserve.

Several helpful programs are available: AHFC Weatherization Program, and for low income residents, LIHEAP offers assistance with weatherization…The objective … is to make a home more energy efficient. Under the Home Energy Rebate Program homeowners who want to make their own energy efficiency improvements on their home can receive a rebate for some or all of their expenditures. The second program is the expanded Weatherization Program, available to Alaskans who meet certain income and eligibility guidelines.

I encourage all Alaskans to join me… as we make energy efficiency a more important part of our daily lives.

The Wasilla Sports Complex building has astounded me ever since I first heard about it.

How a town that size could afford to just maintain an ice rink, amazes me. Ten years ago, an ice rink owned by Dorothy Hamill, went bankrupt. It was located in a mall in Portland, Oregon.

Across the river, in Vancouver, WA, we had an ice rink that went broke a year ago. We're talking about a population of way over a million people.

Does anyone know what the monthly maintenance costs are and if this complex is draining the coffers of the City of Wasilla?

Has Palin figured out a way to funnel state money to keep it open?

Now, I think the finances of this complex would make a fascinating story!

Maybe the iceberg that's going to sink ss palin is related to the sports complex and her house that Todd's buddies built and that's why that Alaska Fund thing was set up to protect all of the Palin crook family from all the legal bills.... Plus a way to launder money for the grifter family....