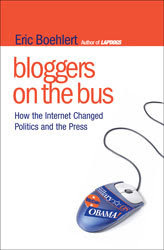 Eric Alterman has written a review of Bloggers on the Bus, for The Center for American Progress, that puts it into perspective with some recent events. Here's the part of his article about Alaska bloggers and Saradise Lost:

Media Matters’ Eric Boehlert focuses on the myriad changes in the mainstream media’s standard operating procedure inspired by the blogosphere in his welcome new book, Bloggers on the Bus. Alaskan blogger and professor Phil Munger recounts the nation’s first brush with a certain Tina Fey lookalike in “Saradise Lost,” which also happens to be a headline from his blog. The non-Alaskans among us with no idea who governed that far-off, freezing land came to rely on a group of little-known Wasillian bloggers when John McCain rolled the dice on an hitherto unknown politician named Sarah Palin to be his running mate. On the morning of McCain’s announcement, “liberal bloggers all over Alaska tapped away on their keyboards,” warning the uninformed (i.e. most of America) about the “Bridge to Nowhere,” Troopergate, Palin’s unorthodox religious beliefs, her former love affair with federal earmarks, her antiscience beliefs, and her dubious claim to being “commander-in-chief” of the Alaskan National Guard.

As Boehlert explained, these bloggers, including Progressive Alaska , AKMuckraker, Celtic Diva’s Blue Oasis, Kodiak Konfidential, Mudflats, Own the Sidewalk, AndrewHalcro, What Do I Know?, Alaska Real, Immoral Minority, and Just a Girl from Homer, already “owned the story.” Meanwhile the mainstream media were scrambling to “even get reporters to Alaska to start their background reporting.” He adds:

“They didn’t realize it then, but within just a matter of days Alaskan bloggers would emerge as one of the most important local newsgathering sources of the entire election season. [emphasis added]

Collectively, they wrote a new chapter in campaign journalism. In the right place—4,300 miles and 74 hours by car from the Beltway — and at the right time and boasting unmatched knowledge about Palin and Alaska politics, the bloggers served an invaluable function.”

Posted by Philip Munger at 3:20 PM

And this is why we must fight long, hard and without compromise to protect net neutrality.

Because without it, we could have had a whole different president right now.

And those that lost the election know it.

When is the made-for-TV mini series coming out ?

Now the rest of the world will know how great you all are; how you pulled us through and how you were the information source which brought Palin's campaign to an end.

We owe you a debt of gratitude we can never repay.