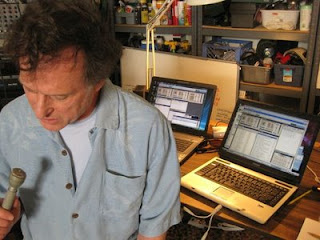 This past week, Jeremy has taken his alternative radio efforts to a new level. On Monday, he aired two hours of call-in talk radio, featuring Camille Conte. For being, spur-of-the-moment and jury-rigged, it was pretty good radio.

CC will be back on KWMD Radio again today, beginning at 4:00 p.m. She promises "special guests." Here's part of her lineup:

Cutting Edge with CC today from 4 - 7 pm on KWMD 104.5 in Anchorage, 90.7 Kenai. Guests include Patti Higgins, Bob Poe and The Demo Memo with Sen. Johnny Ellis!

Here's an excerpt from WhatdoIknow's Thursday article on CC's program:

This could become regular if enough people listen and call in. There's even been interest in linking in from a radio station outside of the general Anchorage/Matsu/Kenai area. And they are working on the streaming too, but probably it won't be up for tomorrow. In some ways this is something of a breakthrough for Anchorage audio media.

Bloggers have broken the dependence on a publisher. CC mentioned Monday how dependent a radio person is on a station to give her airtime. KWMD is still radio, but it's a non-commercial community station that should be doing this sort of thing. But it also used internet technology plus it had a group of blogs publicizing the fact that CC would be on so that interested listeners could catch it. 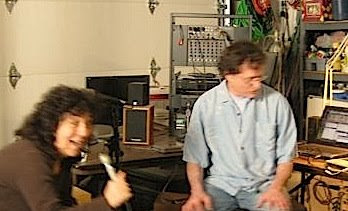 Jeremy Lansman posted a comment on the radio broadcasting setup, at my earlier post on the new stuff at KWMD:

FYI - I am working on rebuilding the 92.5 KWMD translator. It is broadcasting silence now, but when we get audio back into it it, I hope before Friday, should extend a good signal to Eagle River and much of Mat-Su. As KWMD (FM) is solid in central Kenai, and much of South Anchorage its coverage should be roughly comparable to KUDO (AM).

The important question is where is the funding for local hosted programs of a different political outlook than those on KENI, KBYR and KFQD? It would be nice to think that some more progressive business people would support alternatives to the right wing media blasters, but I won't hold my breath.

I've been listening to KWMD a lot since Monday. In the Mat-Su Valley, 107.9 FM signal comes in better than KUDO's 1080 AM one does. In Anchorage on Tuesday, I was able to get 104.5 very well from Dimond to Fort Richardson.

images by Steve Aufrecht
Posted by Philip Munger at 9:56 AM

it will be great if KWMD figures out how to deliver more local political talk. definitely filling a void.
i was working on my rental house last winter for two and a half months solid, in pretty much of my spare time, evenings and weekends -- cleaning, repair work and painting. i had KWMD playing the entire time there. the range of programs is pretty incredible -- from 'Over the Edge', a sort of experimental freeform custom mix of [mostly not musical] sounds that also streams/overlaps phoned-in commentary, almost in real time; various pacifica political programs; alternative radio with david barsamian; media matters with bob mc chesney [great program]; bob fast and various guests from NY; and the rev. less more and the spenard fruit fly. or sometimes just random music. i've told a lot of people about KWMD but not many of them actually try it. or if they do they don't stick with it, maybe because it has drastic mood swings and it's unpredictable? who knows. the aspects other people call drawbacks, i find rather compelling. i love having something like it available locally. i don't like NPR anymore 'cause it's got a republican slant. KUDO is gone. i'm sympathetic to college music radio but i'm 49 years old now.....

web cast for us people out in the hills?

KWMD's web site is currently down, but Jeremy hopes to have it back up soon.

I just received an e-mail from Patti Higgins with the info that is in this forum.

I'm so bummed out that I didn't receive it yesterday, but in any event - HOW AWESOME that CC will be back on!

Yayyyyy CC ~ We missed you!

I tried to post a comment on that "WhatdoIknow" blog under the article about CC being on the air, but I keep getting a message saying that it will not take comments. :o(

CC: If you happen to pop in, I'm sure plenty of people tried to respond to that article, but the response function doesn't seem to be working.

A conversation with Jeremy can be a stimulating adventure.

Not only progressives but All alaskans will appreciate Jeremy's' approach to life:

"challenge the system, don't take what the government says at face value and don't trust the oil companies"

Some people talk, Jeremy does.

Out North Theatre has an FCC approved (.pdf) construction permit, perhaps more elbow grease needs to applied in that area, it would make a nice synergistic relationship.

They have plenty of space, perhaps a small studio could be cobbled together over there.

Efforts are under way, perhaps with more exposure and a little push from the right people......

I'm so envious of what you folks are doing. I spent ten years with KKUP which I believe is still the only all volunteer, all listener sponsored radio station in the US. Music of all kinds, talk across the spectrum, live on air performances and so much more. When I started with them, they were broadcasting (and had been for several years) from a garage. There's nothing like great garage radio. I miss it.

I'll be sending lots of good vibes your way.