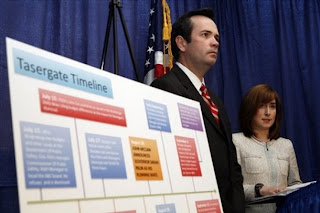 Linda Kellen Biegel, the official Democrat Party blogger for Alaska, should be ashamed of herself and the Democratic National Committee should be ashamed for promoting this website and encouraging this atrocious behavior. Babies and children are off limits.

It is past time to restore decency in politics and real tolerance for all Americans. The Obama Administration sets the moral compass for its party.

Short of another massive show of support for Gov. Palin, like the brilliantly orchestrated, overwhelming demonstrations outside of David Letterman's studios two weeks ago, Obama might be let off the hook on this. Some feel Obama should be impeached for not immediately condemning Linda's action. Others aren't so sure.

Maybe if shown the results of a Progressive Alaska Poll, Obama might react more swiftly. Here it is:

And, in case Meg is voted off the island, who should replace her?

Frankly she owes the people an apology for being such a hare-brained idiot.

I do not want MY president apologizing to Little Miss HissyFit for anything.

S&M should go back to their room and do their S&M thing.

Palin should apologize to all Alaskans, all Americans, to President Obama, and most of all, to Sen. John Kerry for disrespecting a decorated Vet while she was on foreign soil.

Why not a poll on whether Meg should apologise to Linda for mis-representing her (i.e. making out she is an official blogger for a political party) ?

anon @ 1:43 - besides, what you reference might be a legal issue, and running the poll might affect any possible outcome.

OMG some of these are really edgy aren't they?

Anon @1:39...Yes!!!!!!! I don't care one way or the other about Meggie, she'll be sacrificed to under the bus status pretty soon because GINO must have someone to blame for "misrepresenting her." BUT, GINO's appearance, lack of decorum and respect is reprehensible. And, also, there is no one else to blame.

How long is this going to go on?
Nebraska Native

Anon@1:54, I think that is disgusting. I know, I know: Palin is so evil, she eats her young. But that was a bit much.

I think Palin should apologize to David Letterman for stealing his Kerry joke, and then replace Meg with Shannon Doherty.

Meg Stapletongue actually demanded an apology from Obama? Because Celtic Diva is the "official blogger of the Democratic Party"? That's the reason given?

Not only will she be ignored, but she's lucky if the secret service doesn't start investigating her for a whackjob person of interest re: national security.

She is so gonna get fired.

You just can't make this stuff up.

Well, I voted for the late Johnny Cockran. I'm sure his silence would serve ol' GINO much better than ol' Meg.

The Palin tribe was trying to redefine freedom of expression by trying to shame folks into submission. Fact is, ol' Meg's statement was issued within 24 hours of Burke's photos popping up on the internet. You know, that guy that proudly wore a t-shirt that said, "Homophobic Red Shirt Bible Thumping Nazi Gay Bashing Tea Bagging Rascist White Guy Bigot." (Hope I didn't miss anything.) "The Ayers Effect," pallin' around with a Nazi and Bigot has tarnished her just like she tried to tarnish President Obama during the campaign. And using shame to manipulate folks while asking the Obama Administration to intervene in an effort to violate freedom of expression of a private citizen should be considered outrageous. Methinks their purpose was a diversion or distraction. They just wanted that photo to be taken down as quickly as possible, once again using the baby's disability for political gain. It should be obvious that the Palin tribe has no idea what "real tolerance" really means!

The month of June has been an utter PR disaster for Sarah Palin, and it's not over yet. Three more days to go. The "stars above" are not aligning!

I've been posting those pictures of Eddie Burke in his shirt everywhere I can think of. Sarah should be known by the company she keeps.

Nebraska Native: I have a sinking feeling that once the video of the "Look at ME!" tour is done, FUX NEWS will play it over and over, Hannity and Greta will drool over it.
Blue_In_AK: Good going, I have seen Eddie in his lovely red shirt over on DU, keep up the good work.
Phil: I had to vote Eddie Burke - the faster to SINK you my dear Sarah.

I voted for son-to-be ex-Gov. Sanford.

He and Sarah could discuss II Chronicles, Lamentations and Job all day long.

Meg should be replaced by Rebecca A. Mansour; after all, she is, the one who came up with the word "iconic" in the first place. Meg just stole the idea and elaborated a bit.

She can't keep her cool, is shrill and talks over people, has no sense of humour, and is absolutely tone-deaf on Alaskan (and pretty much all other) issues.

If anyone could do a better job of sinking GINO's boat, it would be her.

Surprised that no one has noted that Sarah and Meg will have to get in the "people some people think Obama should have to apologize to" line right behind Ahmadinejad.

That'll make it easy to keep an eye on a least a couple of the 'extremists'.

You should have provided a Hell No vote.

I decided to use a one-vote-only option for the polls, so I didn't want to have more options than are posted.

I've come to the inescapable conclusion that Meghan Stapleton is every bit as Batshit Crazy™ as Sarah Palin.

Catholics throughout the world demand an apology from Sarah and Megan for desecrating the iconic and sacred images of the Virgin Mary/Madonna with the baby Jesus by likening them to Sarah and Trig. As a Catholic, I am deeply insulted by Sarah and Megan's offensive press release.
Andree McLeod

Well when you take into consideration how quickly that Mansewer and her knuckledraggers picked up on Celtic Diva's/DrChill's photoshop picture, and then how quickly Megomouth responded, and then note how not one word has been offered about all these other sites who are now employing the art of photoshop regarding that same picture, it doesn't take a genius to figure out that this was simply a personal vendetta unleashed upon Celtic Diva by Palin and her groupies.

The use of "special needs" in their deliberative attack on Celtic Diva as opposed to just "child/children" suggests also that this was chosen carefully to further escalate outrage.

These "fans" along with Palin and her administration will stoop to any level to portray her as a victim. It is disgusting, transparent and will not be forgotten.

This is an Internet Smackdown of epic proportions:

The score is currently:

I take back everything that I said about you bloggers being irrelevant.

This is the single most funniest incident that I've seen yet.

Good on the goons to smack down Stapelton back in her place.

Considering that Ms. Palin is a narcissistic control freak, it's probable that the ridiculous statement ("desecration" "icon") actually came from her.

S&M are so abysmally provincial and unsophisticated that everything that comes out of their mouths is cringe-worthy.

Keep after this joke of a politician, Phil. You do great work!

Anyhow, it wouldn't make a whit of difference who was Palin's PR person because she wouldn't listen to them anyway.

One of your choices to replace Meg Stapleton is Johnnie Cochran. He's been dead for a while. How about Levi Johnston? The kid needs a job, and he seems able to control his mouth.

Surprised she hasn't asked Obama to apologize for the earthquake a few days ago, the Yukon flooding, Mt. Redoubt -- she seems to think he's God.

I think Jindal is supposed to apologize for Mt. Redoubt.

Catholics throughout the world demand an apology from Sarah and Megan for desecrating the iconic and sacred images of the Virgin Mary/Madonna with the baby Jesus by likening them to Sarah and Trig. As a Catholic, I am deeply insulted by Sarah and Megan's offensive press release.
Andree McLeod
Aussie Blue Sky

Great job on the Method show today Phil! What a great day for all of us. Getting to hear Shannyn, AKM, Linda, & you was fantastic.

That discussion re Palin's "frantic flight" from Texas, risking Trig's very life was amazing. I only wish everyone in the country could have heard it. As you pointed out in a recent blog, it was beyond reprehensible, if in fact it was true. Thanks for all you do for us! You are greatly appreciated!

Don't forget the Eastern Rites. Sacred Icons of the Virgin and Child may have reached their epitome in the best examples of ritual art and objects created from within the Russian and Greek Orthodox communities.

We had fun getting information out to the public nobody else has yet had the opportunity to share with so many enquiring minds.

Is this a trick question?


Thank you, Phil, for the great work.

Sarah and Meg have delusions of grandeur. They think that if they keep Sarah on the media radar, it helps her political creds and makes her more suitable for governing at the national level. Neither of them is capable of rational or logical thinking. If they were they would see the need for SP to STFU and devote her time to doing what's best for Alaska. And while they are at it, they should be reading about foreign & U.S. policy, U.S. history, political science, world history, international relations, and anything else related to governing effectively, but they won't because it's too difficult for them to accomplish. I can take one of my former U.S. history, world history, or civics students and he/she would run circles around Sarah & Meg in these areas.

I am seriously waiting for her cult-followers to start seeing her in things - like blobs of mustard or mayo, tree sap, or maybe maple syrup on pancakes.

Since she obviously has elevated herself to Madonna (which appears a bit sacreligious to some), and views her image as iconoclastic, she has crossed the boundaries of accepted behavior among most people of faith.

Pretending to be a "god" is a huge nono among those who believe. It is also a big bad "don't go there" from most organized religions who believe in the bible.

Setting yourself up as a religious "goddess", implying you are holy or sacred? This is a woman who literally cannot even look at her baby's face because he is not a normal child. She appears to be offended by his DS.

She is strange and she is horrid. This poor child appears to be getting none of the care required to assure he achieves his highest functioning level. And does he also have underlying physical issues with his DS? (Not uncommon in these individuals).

Now, if we're actually voting on who to toss of the island, I vote for Megasaurus. RAM is simply a joke and not worth a vote.

Phil:
I believe the choice of Tonya Harding is well thought out and a good one. However, as bad as Tonya Harding is, I also believe her life has been destroyed because of her bad choices so I can't vote for her or wish her more rottenness than she has done to herself.

I'd vote of Johnny Cochran but he's been dead too long.

Nope. Eddie Burke. And he must be required by Palin protocol to wear that crazy, misspelled red shirt of his to ALL official press conferences.

How is Eddie Burke different from the doctor who attached himself to Michael Jackson, to feed his own ego?

It appears to be a mark of very insecure and emotionally immature individuals who lack self confidence.

Is everyone in Alaska a drama queen?