What if All Alaska Governors Had Blackberries and Twitter? 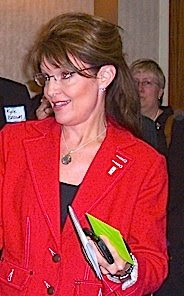 Wednesday, Alaska Gov. Sarah Palin reacted to news that the most recent citizen request for clarification on a matter involving the governor and Alaska's executive ethics code had been decided in the governor's favor, by reaching for her Blackberry, and twittering. Here's AK Muckraker's description, from The Mudflats:

You want to know the latest news about the governor, and the status of ethics complaints filed against her? Are you checking out the State of Alaska website? Silly you. For the hot cutting-edge news, you’ve got to be hooked up to the Twitter.

She even beat the Anchorage Daily News with this one.

AKGovSarahPalinWe won. Another expensive, time consuming false ethics charge thrown out. Remember the one: I wore my coat w/Arctic Cat logo & was charged?about 1 hour ago from TwitterBerry

Yes, even in victory, out comes the inner middle schooler.

Even though Blackberries hadn't been invented by John McCain until after Al Gore invented the internet, let's imagine, for a moment, if all of Alaska's previous governors had had the internet, the Blackberry, Twitter, and an 8th-grade level of snark, or, as AKM put it, a perpetual "middle schooler" sense of expressiveness.

WTF! You mean that if we take money from DC, the Feds have a say-so in how we spend it. Say it ain't so, Joe. Maybe we shoulda remained a territory, so we could progress the state on our own!

NIGI! Got teh hiway named after hizzelf, but now I'm guv - iz rode to knowhere! Know where? - >URS, Huck Fickel!

Jay Hammond twitters on the legislators' reluctance to create the Permanent Fund:

Bill Sheffield twitters about the news that he's about to be impeached:

Steve Cowper, after an all-nighter with oil lobbyists in room 604 at the Baranof, gets a text that the Exxon Valdez is up on Bligh Reef, leaking a lot of oil:

Frank Murkowski, looking at the GOP primary results in 2006:

Posted by Philip Munger at 9:06 AM

Phill, anony-mouse here,
I got a text from my cousin in that village, where Pervert & Palin showed up in... where she baked cookies and dished out scripture... It went like this:

UPCHUCK=Pervert & Palin. So we did the right thing & hid the children.

OT--thanks for all you do; I appreciate it. You wouldn't believe how similar Alaska and Texas are.

What if All Alaska Governors Had Blackberries and Twitter?