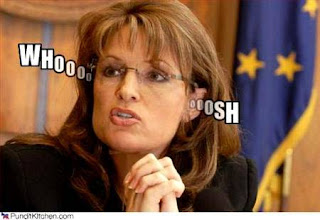 Through the dauntless efforts of her supporters, led by "film maker" John Ziegler and Anchorage AM talk radio host, Eddie Burke, Alaska Governor Sarah Palin has managed to hold her own nationwide over the past few months, among conservative Republicans, by making up for her loss in popularity by people with an education, through her widening support among those less schooled.

Why that is so is a no-brainer. In spite of sites like Conservatives4Palin, that have a faux intellectual approach, and TeamSarah, that has a faux feminist approach as part of its mix, the only approach that seems to attract more support for Palin is one aimed at the lowest common denominator.

Yesterday's release of a Pew poll comparing the so-called leading Republicans in the 2012 GOP presidential candidate mix, was spun by the Anchorage Daily News today as mostly good news for Palin, but it certainly is not. Here's the Pew poll's table on her popularity among people she must consider to be the center of her nationwide base:

Note that even white evangelicals with post-secondary educations are becoming less enchanted with Palin. However, she more than makes up for that loss with the growing support among people who are categorized as "HS or less." I wish the poll had gone on to do "Middle School or less" and "Grade School or less."

She has no local or nationally known advocates who are widely respected among Republicans, let alone the population at large. Her two most prominent advocates, John Ziegler on the national level (you can quote me, John), and Eddie Burke, on the Alaska level, are intensely polarizing hacks. Ziegler has used the launch of his movie about Palin to become a major joke on the web, cable TV and elsewhere. The local print media virtually ignored his Alaska appearances on Palin's behalf. 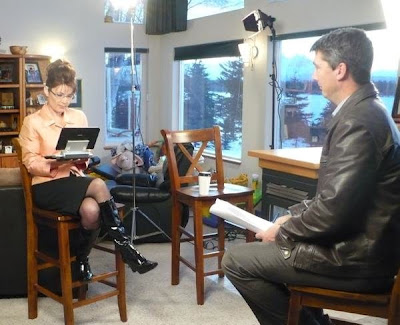 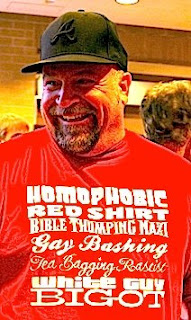 Burke, who is well-known for his bullying ways and homophobic views, has Palin spokespeople on his show several times a week. Most of these appearances are now being recorded and cached by Alaskan and national bloggers, storing them up for 2010, 2011, and - if she somehow lasts that long - 2012.

It is rich fodder, and we need to extend our hearty thanks to John Klapperich, KBYR's owner, for providing it to us on a routine basis.

Thanks, John! Keep up the good work.

If "progressives" are the smartest people in the country, why is it that you all resort to childish petty personal attacks instead of debating the issues like the "intelligent" adults you keep telling everyone you are?

@3:50 a.m. - The above-mentioned study, if you care to read it, shows that progressives can only dialogue with some "non-progressives" by including simple concepts (such as "Sarah appeals most to those without high levels of education").

I am so not surprised.

A quick visit to the TeamSarah site, the most hard core of SP support blogs, reveals a mostly pitiful succession of mis-spelled postings, short on any actual understanding of history, science or biology.

I do not care to play the troll, and mostly observe.

Of the very few comments I did leave, the one that was deleted, was an observation that the Founding Fathers of this nation did not invent democracy, that it was a popular form of government (to an extent) in ancient Greece.

Yes, this bit of what I assumed to be common knowledge, was an unwelcome and awkward to the post in question, whose principle point was that America was the only nation in which the concept of one man, one vote could be found.

This is the vast sea of ignorance in which Sarah hopes to float her ship.

if no college degree = uneducated, then wouldn't that include our junior senator, too?

I find it interesting that her approval has fallen significantly among Republicans, less with evangelicals but especially with "all others" (what does that mean?). Yet it has gone up with (the presumably uneducated) Democrats and Independents. I suspect this result is influenced by her recent whinathon over Letterman, with those who were sucked in by her stunt saying they liked her to show their solidarity with women. They won't stay in her camp.

So actually, this shows she's in trouble. She won't keep the support of the Dems and Independents she gained, and she's losing the Republicans.

Phil, is there anyway you can get the "ICEBERG" story at KOS? Dennis's story?
I'd hate to see it covered by the Faux baby Burke outrage.

I supported her in her gub run and was very happy-- she was nice. Everything changed when "stuff" came out and I saw how mean she could be. Politics pre-Sarah was fun because we were out with our signs and waving and if I didn't agree with someone, I'd say, "I'll see you at the polls and we can cancel each others votes!" They'd laugh and say I was on.

I ignored her initial bash against Lyda's cancer. I really thought that they ACTED like they didn't get along. Then my dad died of cancer. My best friends' mom died of breast cancer. Now it is personal.

The Republicans make their own sick jokes and act stupid. (See Carl at the death penalty debate with his disrespect of a priest, trying to act like a wise guy. Or Bill the Dolt Stoltz any time his lips move on something that doesn't tow the party line.)

True, the Democrats won't let them own guns and will take away their rights on certain things, but the Republicans aren't different. They just have other rights they want to take or keep away. And they laugh at misfortune as it pertains to other people and call themselves Christians.

The question is...will there be enough stupid people to elect her?

So can we assume Eddie Burke is so stupid he cannot even spell racist altho he is one?

I hesitate to say she is popular with the uneducated - she is extremely popular with right wing wacky religious fundies (like Sanford) who yell about "sin" while committing it out of the country.

I suspect she would be reelected as Governor - Alaska has proven they have issues with keeping political nutjobs in line - but for her to believe the Lower 48 would even let her run is insane.

She attracts the worst of the human race: the homophobic, racist, crazies. This isn't a Republic/Democratic Party issue. She appeals to the lowest form of human life only.

She will NEVER be POTUS. She has something in her past. We kicked her a** out of the National Race, and if we have to, we'll do it again. She adds NOTHING to the Republic Party.

You hit a nerve, again!
Keep it up Phil.

Phil, you should send this to CNN.

If they put up ridiculous whining complaints by Sarah about people abusing her special needs baby, then they can't report some news about how people really feel about her!

The woman is a phony, an opportunist and a liar. That is why intelligent people see her for who she really is. I think it is incredibly said that there are Americans who are so poorly educated that they can't tell a phony politician from a sincere one....

"The question is...will there be enough stupid people to elect her?"
going out on a limb here and saying NO. we tried the dumb politicians already and it didn't work out too well. that's pretty common knowledge, even in the bible belt.

There are intelligent, thinking members of society that did not actually complete their college degrees. I am one of them. I like school and I love learning. I learn new things on a daily basis and try to expand my view of this world on my own through reading and educating myself in other ways. It's called curiosity; a thirst to for knowledge and it doesn't have to be administered through an institution of higher learning.

I feel that some of the die hard from the far right side of the political spectrum gain their knowledge by having it spoon fed to them from adherents of the bible or from purveyors of far right jargon. They don't ask enough questions, thus they actually learn nothing through their digestion of the information that is presented to them.

I just wish these people would be more curious and ask more questions and have a real thirst for knowledge instead of just following their crowd.

I'm glad her personal suck up radio guy is wearing the "A for a$$hole" base ball cap.

Through the dauntless efforts of her supporters, led by "film maker" John Ziegler .....