Saradise Lost - Chapter One Hundred-Twenty-Six -- Is the Tone at McCain-Palin Rallys Moderating Today? 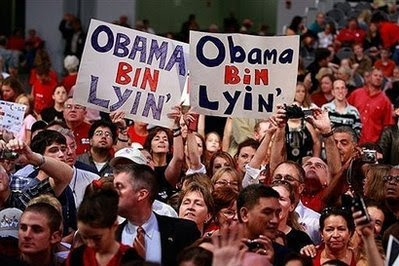 Here's a recap of some of the concerns about the growing hostility, violence and hatred at McCain-Palin rallies around the country. It is a disturbing issue not only for the rest of the country, but, particularly, for Alaskans, who will have to deal with the negative issue of herself and of Alaskans, Sarah Palin has projected as a shadow, across our futures:


The Anchorage Daily News has so far left this impending darkness unaddressed.
Posted by Philip Munger at 1:16 PM

Yes it is an erratic campaign - failure to note - it is a racist campaign - this was sent to me and I'd like to share it: Feel free to post it if you like.
How Racism Works...
What if John McCain were a former president of the Harvard Law Review?
What if Barack Obama finished fifth from the bottom of his graduating class?
What if McCain were still married to the first woman he said 'I do' to?
What if Obama were the candidate who left his first wife after she no longer measured up to his standards?
What if Michelle Obama were a wife who not only became addicted to pain killers, but acquired them illegally through her charitable organization?
What if Cindy McCain graduated from Princeton (BA) and Harvard Law (JD)?
What if Obama were a member of the Keating-5?
What if McCain were a charismatic, eloquent speaker?
If these questions reflected reality, do you really believe the election numbers would be as close as they are? This is what racism does.
It covers up, rationalizes and minimizes positive qualities in one candidate and emphasizes negative qualities in another when there is a color difference.
You are The Boss... which team would you hire with America facing historic debt, 2 wars, stumbling health care, a
weakened dollar, all-time high prison population, mortgage crises, bank foreclosures, etc.?
Educational Background:
Obama:
Columbia University - B.A. Political Science with a Specialization in
International Relations.
Harvard - Juris Doctor (J.D.) Magna Cum Laude
Biden:
University of Delaware - B.A. in History and B.A. in Political Science.
Syracuse University College of Law - Juris Doctor (J.D.)
vs.
McCain:
United States Naval Academy - Class rank: 894 of 899
Palin:
Hawaii Pacific University - 1 semester
North Idaho College - 2 semesters - general study
University of Idaho - 2 semesters - journalism
Matanuska-Susitna College - 1 semester
University of Idaho - 3 semesters - B.A. in Journalism
Now, which team are you going to hire ?
PS: What if Barack Obama had an unwed, pregnant teenage daughter..
Oh Pay Pay - you are a piece of work.

Are they trying to set up a fighting crowd to justify military action and martial law?

Salon.com on "The Palin's Un-American Activities"

***
Anonymous(2) asks about insurrection. The sad truth is that the Cheney Administration could very well be planning a variation on the CIA plot of 1953 when Kermit Roosevelt hired opposing mobs in Tehran, Shiraz and other major Iranian cities to foment riots and "prove" that the then Prime Minister, Mohammed Mossadegh, was incapable of controlling his nation. This time Cheney would be ready with the 3rd Army to "control" an unruly nation. Martial law? Surely DoD has a contingency plan to put into effect at the whim of the Vice President.

In a community that has 94 languages in its School District, and a large Alaska Native population we are blessed to live in a diverse population. I'm not sure how that population is going to react now that we've seen her true colors. I personally have been embarassed that the rest of the country now thinks that that is the way Alaskans act, and that is embarrassing. I hope that Alaskan remember this when the next election comes around.