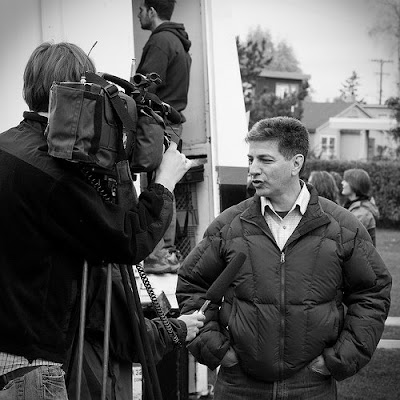 [Terry Haines at the Rogue Wave wrote what I consider to be the best article about Ethan Berkowitz since the Alaska primary. I asked him if I could reprint it here. Terry's cool with that]

Fishermen's Hall in Kodiak Alaska is a Political Lion's Den

Many of the candidates or board members or councillors who have met local fishermen there may have felt poorly protected sitting behind the United Fishermens Marketing Association's long formica table. The notoriously "politically engaged" citizens of Kodiak have a tendency to gather their chairs into a tight predatory semicircle around the table, stroking beards and waiting with glowing eyes take turns gnawing at the candidate or councillor. Many who come here fear "open" events, preferring private sessions in the homes of true believers.


But Ethan Berkowitz looked comfortable behind the big brown table yesterday as I entered the Hall. He was talking about Adam Smith and ethics in capitalism. And the lions were listening.


Berkowitz has a talent for defining the overarching philosophy that drives his politics, which is unusual among successful politicians. Being specific takes away the wiggle room essential to so many pols- most feel the need to be a fan of both Rays and Phillies, depending on the audience. But Ethan's defining characteristic as a politician is his iron insistence on principle over pragmatism. In the last governor's race here he disappointed many in Kodiak when he chose to run as lieutenant to his friend Tony Knowles. He had slowly gained a great deal of support here, and many considered him the superior gubernatorial candidate. But he had promised to step off if Tony decided to run, and Ethan honored his commitment. As he told us yesterday "Never compromise on things you believe in, or your loyalties. Legislatures are like shark tanks. Once you get cut they will eat you alive. You have to stand up for what you believe in."


Maybe that's why he fits in so well around here. Fishermen are famously firm in their beliefs and loyalties. And he is also a confirmed capitalist and fishermen were the very first freemarketeers. His reference to Adam Smith was part of a theme: that there is a big difference between capitalism and cutthroat business. He is a big proponent of the former- but he repeatedly makes the point that our government often isn't. In response to a question about the new program that privatized Alaska's crab and locked out the free market he said "True capitalists should be opposed to monopolies."


He also takes exception to other interferences in the free market. In favor of removing subsidies for oil and gas production, he also points to hindrances to development of renewable resources that should be eliminated, suggesting that our energy policy has been dominated by monied interests, not in providing an "even playing field" for everyone. In favor of developing ANWR, he is not in favor of the position of thr proposed Pebble Mine at the headwaters of the greatest salmon run on earth, nor is he in favor of offshore oil and gas development in Bristol Bay. But he stressed the need for Alaska, and America, to be energy independent both for quality of life and national security reasons. So he is in favor of responsibly extracting more of our reserves while making sure we have a wide open field to develop alternatives.


When asked about the trouble our rural communities are having, especially with the cost of heating oil, Berkowitz pointed out that while Anchorage is Alaska's center of business and population, the wealth of Alaska comes from its far away places and we have a responsibility to communities there. For years I assumed the Republican Party was the place to look for responsible capitalists. I found one, but he's a Democrat.

On The Issues:
Fish: In favor of a federally funded observer program. Leery of Crab Ratz type programs for their tendency to curtail both opportunity and free markets. "You don't want absentee investors controlling your fisheries."

Resources: "We still act like a colony. We extract the raw product and ship it away, where most of the value is taken."

Health Care:"We compromise our moral integrity" when we put pharmaceutical companies profits before the health of our citizens. "People who are sick should be able to get treatment, people who provide it should be able to get paid." Says Denali Kid Care could cover 20,000 more kids in Alaska. Says Medicare reimbursement levels are so low doctors often take a loss on those patients.

Education: "We need an education system that teaches every kid as an individual." Quoting Yeats on learning: "It's about lighting a fire rather than filling a bucket."

Earmarks: Rather than working earmark by earmark, Berkowitz calls for a distinct strategy on health care, energy and education. By planning ahead you can fully fund programs rather than reactionary knee jerk earmarking.

The Economy: Beyond bailouts, Berkowitz favors a federal infrastructure investment, especially in energy and communications, as well as a commitment to rebuild our health and education systems, to provide a solid base for future economies.

On Don Young: Ethan doesn't talk about Don much, except to say "I've heard a lot from Don Young about how he doesn't like the people he works with. We've got to get past that. Personal attacks trivialize the real issues."

On Term Limits: Against them. He thinks its up to the voters to limit terms.

"I like to think I am Don Young's term limit."
I'll end with a quote from Adam Smith. I think it's pretty obvious Ethan is familiar with it. I wish Mr. McCain was:


"To attain to this envied situation, the candidates for fortune too frequently abandon the paths of virtue; for unhappily, the road which leads to the one, and that which leads to the other, lie sometimes in very opposite directions. But the ambitious man flatters himself that, in the splendid situation to which he advances, he will have so many means of commanding the respect and admiration of mankind, and will be enabled to act with such superior propriety and grace, that the lustre of his future conduct will entirely cover, or efface, the foulness of the steps by which he arrived at that elevation."

image by somewhere in Alaska
Posted by Philip Munger at 9:54 PM