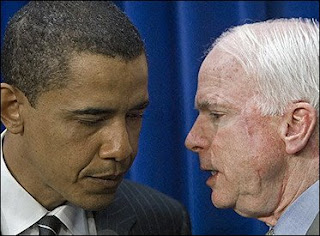 “…this is going to be, I think, one of the most consequential decisions of the next president…”

The Supreme Court discussion during last night’s debate was certainly one of the highlights as well as one of the most important issues of this election.

The lasting and devastating impact of a McCain-Palin Administration would be in their Supreme Court appointments. Three of the four members of the liberal bloc-John Paul Stephens (age 88), Ruth Bader Ginsburg (age 75) and David Hackett Souter (age 69)-are expected to retire or expire during the next president’s term. By comparison, three of the four members of the conservative bloc-John Paul Roberts (age 53), Samuel Alito (age 58) and Clarence Thomas (age 60) are spring chickens by Supreme Court standards and will actively legislate from the bench for many years, perhaps decades, to come. Antonin Scalia (age 72), is a tough old Italian and not expected to leave anytime soon. John McCain is on record saying he admires and would seek justices like John Paul Roberts and Samuel Alito.

“I have my own standards of judicial ability, experience, philosophy, and temperament. And Chief Justice Roberts and Justice Samuel Alito meet those standards in every respect. They would serve as the model for my own nominees if that responsibility falls to me.”

Last night, McCain said he would not have a litmus test for his Supreme Court appointments and in his next labored breath claimed, “Elections have consequences.” McCain went on, “I will find the best people in the world–in the United States of America who have a history of strict adherence to the Constitution. And not legislating from the bench.” Really? Just like Chief Justice John Roberts and Justice Samuel Alito? The same Roberts and Alito who, last June, voted in the minority against restoring habeas corpus?

A McCain Administration would threaten legal cornerstones like habeas corpus. Habeas corpus is not an amendment to the Constitution, it IS the Constitution. It is the 13th Century right to challenge your detention. Our revolution against England was in large part a rejection of the disappearing citizens-shackled in dungeons, imprisoned or killed without charges. The Military Commissions Act, signed into law by Bush on October 17, 2006, suspended habeas corpus and undermined America’s rise over the tyranny we’d fought against. On June 12th of this year, the Supreme Court voted to restore habeas corpus in a 5-4 decision. Roberts and Alito led the RATS (Roberts Alito Thomas Scalia) in dissent. Dissent of the Constitution itself!

A vote for McCain is a vote for a clone of Roberts and Alito! It is a vote against the Bill of Rights and for the roll back of our civil liberties. If you trade Stephens, Ginsburg and Souter for three Roberts-Alito clones, a future court ruling on habeas corpus would permanently eliminate the right of American Citizens to challenge their detention with an 8-1 landslide and landmark decision. Clearly, John McCain doesn’t understand the Constitution, or he is lying about nominating justices “who have a history of strict adherence to the Constitution.”

Consider the recent Exxon Valdez verdict (audio interview on the day of the ruling with Greg Palast) that somehow slipped Sarah Palin’s mind when asked to comment on Supreme Court decisions by Katie Couric. Exxon, the company that set and broke planet earth’s quarterly profit record three quarters in a row, was let off the hook. Future corporate punitive damages are now forever minimally capped because of a conservative John “What more can a corporation do?” Roberts Supreme Court! The Court based their conservative activist ruling on 19th Century Maritime Law! 21st Century Corporations can now view punitive damages as the small cost of doing business. Due to Exxon’s negligence and the corporate sympathy of the Supreme Court, one the largest acts of environmental terrorism in history was treated like an accidental littering.

But the Supreme Court discussion last night centered on Roe v. Wade. While Roe v. Wade is an important and controversial decision, it’s also the biggest carrot the Republicans have to motivate their Christian Right base. If the Court were to overturn it, the Republicans would potentially lose a massive funding source. It would also stifle their ground game to incite their base to vote en masse. Abortion is also a distraction. While the focus is on Roe v. Wade, the Supreme Court is setting precedent and making decisions empowering corporations at the People’s expense; judicially paving the way to fascism.

As an Alaskan, I am all too familiar with Sarah Palin and her blurring the line between church and state. But her potential as vice-president to influence and legislate her religious beliefs terrify me. Her “no choice” stance on abortion causes me great concern. I’m not a liberal with an abortion punch card, but I agree with Roe v. Wade. What happens in my uterus or anyone else’s is a private matter. Last night, Barack Obama remarked,” I am completely supportive of a ban on late-term abortions, partial-birth or otherwise, as long as there’s an exception for the mother’s health and life…I’m willing to support a ban on late-term abortions as long as we have that exception.” John McCain sarcastically retorted, ”Just again, the example of the eloquence of Senator Obama.

He’s health for the mother. You know, that’s been stretched by the pro-abortion movement in America to mean almost anything. That’s the extreme pro-abortion position, quote, “health.”” What? Excuse me? McCain’s outright mockery of the health and life of the mother as being a legitimate reason for termination was deplorable. How dare he!? Perhaps Palin has rubbed off; maybe he can now see hospitals from his many houses and is an expert in medical care. However, he’s dead wrong. According to the CDC, the maternal mortality rate in the United States is the highest it’s been in decades. Shame on you John McCain.

In Sarah Palin’s RNC speech, she said of Barack Obama. “Al Qaeda terrorists still plot to inflict catastrophic harm on America … he’s worried that someone won’t read them their rights?” Hard fought rights are who we are, what we stand for, what we’ll do, and what we won’t. They are not about who or what we fight. If the terrorist attacks of 9/11 were because terrorists “hate our freedom”, they will surely love us with a McCain-Palin Supreme Court. Last night, Barack mistakenly gave McCain credit for standing up to Bush on torture. John McCain caved on waterboarding. McCain, in fact, is willing to turn our service men and women into those who tortured him. He had the street cred to just say no to the Bush Administration when it came to waterboarding and FAILED!

He knows it doesn’t provide accurate information, and turns men into monsters. McCain wants to be a maverick, but instead puts politics above principles; the rule of men over the rule of law.

The Supreme Court has been a motivating factor for voters in elections past. This round, however, is truly an unprecedented moment where the scales of justice are threatened; like never before. A vote for Barack Obama keeps those scales level. A vote for John McCain shifts the balance of the court to the far right for decades and threatens that which so many have given their lives for.

Posted by Philip Munger at 8:42 AM

The supreme court balance is a point that has not been made often enough, and unfortunately most voters probably won't make the connection to how that affects them. If they did, Alaska would vote for Obama because McCain's appointments totally fucked us. Great post Shannyn. Where oh where is the progressive radio voice when you need her???

Greetings from another cold place. Don't count yer Obamas before theyre voted for. Todays Gallup has just a two point gap among traditional voters.Factor in error and Bradley - and as Obama said he aint there yet.
www.skynews.com/foreignmatters