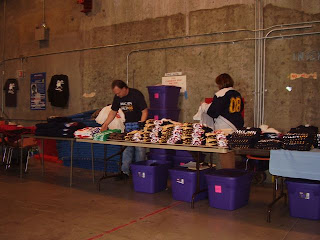 Anchorage DailyKos diarist, frsbdg, put up a diary there this morning that pokes fun at yesterday's Kinkaid Park bunker Palin rally. The rally in the bunker was a klunker, at best. It was so emblematic of how the wheels are shearing off of the McCain-Palin clown car. I can't believe KWHL had anything to do with this, but they did.

Reading Wesley Loy's Anchorage Daily News story about this yesterday, one doesn't get an accurate impression of what this must have been like - at all. The story just sat there yesterday, gathering very few comments. But after frsbdg put up his Kos diary, with a link to Loy's story, it picked up quite a few. Here's one, from AK_Finngirl:

I was at the event. It was BEYOND lame. I assumed that there would be enough people there so I could watch inconspicuously, but there was practically no one there. like the other posters said, MAYBE 50. Of course the news article says it was about 200 throughout the whole four hours, and I didn't stay.

The entertainment/singer/comedian was frankly, bizarre. The event had all the energy of a dying tree stump.

Here's frsbdg's YouTube of the t-shirt counter and almost-empty bunker:

I've seen more people in that bunker waxing skis on rainy weekday. You can go to his diary and listen to the lame band. I'd rather not post it.

image by frsbdg
Posted by Philip Munger at 11:46 AM

Thanks for the cross-post. The comments on the ADN blog are entertaining.