From the Monday Columbia Missourian:

The Republican presidential nominee from Arizona landed at the Columbia Regional Airport around 12:30 p.m. As McCain disembarked from the plane, a man yelled, "Go get 'em, John."

Ellinger said McCain is going to tour Columbia businesses "and get to know people and what they're doing and daily life."

A crowd of about 15 people assembled outside the airport's fence to see him descend from the plane.

Later, in St. Louis, McCain greeted a crowd, estimated to be a bit over 1,000. They were chanting "Sarah, Sarah, SARAH!!" 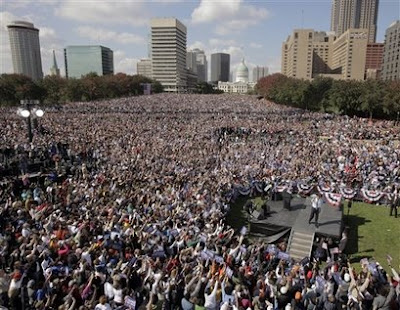 But the next two weeks will see less importance to these rallies. More important for our future, are down-to-earth GOTV efforts, and keeping an eye on the GOP as they attempt to disrupt this national election way beyond what they've done in the past:

Watch Ohio, especially, these next two weeks. 2004 was nothing. The GOP will do ANYTHING to keep that state.

Posted by Philip Munger at 8:19 AM

Ellinger said McCain is going to tour Columbia businesses "and get to know people and what they're doing and daily life."

Shouldn't he have been doing this stuff 15 years ago when he was running in AZ and just kept it up?

This late in the game, people should be doing a candidate's talking for them.

Obama drew 175,000 in St. Louis and Kansas City over the weekend. So McCain allows his campaign staff to push him into chasing Obama into Missouri on Monday, and he draws all of 2000 people.

Seriously, I think Obama's low key approach to Sarah Palin is the right strategy. What should Democrats do about a populuar evangelical Republican who leads their party into small rural communities, disses the large population centers, brings out the racist vote, refuses to interact with the MSM, and disses educated Americans? Answer: nothing. Let Palin talk unencumbered. Let her lead a narrowing Republican party into 2012. Make our day.

whimmed: Is your space bar not working? You poor thing!

Gov. Sarah Palin charged the state for her children to travel with her, including to events where they were not invited, and later amended expense reports to specify that they were on official business.
The charges included costs for hotel and commercial flights for three daughters to join Palin to watch their father in a snowmobile race, and a trip to New York, where the governor attended a five-hour conference and stayed with 17-year-old Bristol for five days and four nights in a luxury hotel.

If you think robocalling is bad, I see in this YouTube video that McCain's campaign is outsourcing their calls to India! I guess that's what you have to do when you can't find enough "real Americans" to be your volunteers. This is a pretty hysterical behind-the-scenes look at the McCain campaign through the eyes of Martin Eisenstadt (the guy who 'leaked' that Joe "the Plumber" was linked to Charles Keating):
McCain Outsourcing Robocalls to India