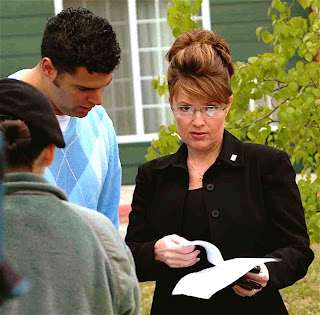 Progressive Alaska covered Alaska Governor Sarah Palin's evolving statements about what Alaska Senator Ted Stevens should now do, yesterday and Monday. Essentially, she is now asking him to step aside, but in an undefined way, that appears to mean he should stay on the ticket next Tuesday, somehow win, and then immediately step down, allowing for a later special election. In the 90-day interim, she would be able to appoint a temporary successor to Stevens' seat, including herself, if she so chooses.

But, unlike Alaska GOP Communications Chief, McHugh Pierre (seen above left, with Gov. Palin last summer), or the Stevens campaign, she didn't specifically ask people to vote for $t. Ted. Why be specific, anyway? It is far too late for his name to be removed from the November 4th ballot.

So far, the Alaska media seems to be content with categorizing her Tuesday morning Stevens statement as being something it really isn't. They are printing that it is her request for him to step aside, or down. It isn't. It is her veiled request for him to stay on the ticket until it suits both her and the Alaska Republican Party. Anyone who thinks she will defer to Alaska GOP preferences for a Stevens successor, over her own wacky ideas, is a fool.

image by Dennis Zaki
Posted by Philip Munger at 6:59 AM

And new information for me as well. I did not know she could temporarily appoint herself, that certainly changes my perspective.

I used to like her so much! Frank and Lyda and Andy warned us. Did we listen? No!

According to Harry Crawford who was a guest on CC's show on KUDO, Governor Palin would NOT be able to appoint a temporary successor to Stevens' seat.

The seat would remain unfilled until a special election were held, according to Rep. Crawford.

He also stated that if she did try to appoint someone that the Alaska Democratic Party would file immediately to try and stop such action.

So she could appoint her husband?

anon 2 #3 - it hasn't yet been tried in court whether or not the governor of Alaska has the power to appoint a temporary occupant of a vacant U.S. Senate seat from Alaska. There are at least two points of view on this. My essay took the point of view I am certain she would take.