Saradise Lost - Chapter One Hundred-Sixty -- Will Sarah Vote For Ted? 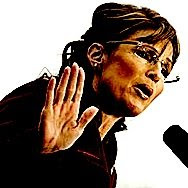 Alaska Governor Sarah Palin refused to ask Sen. Ted Stevens, upon his felony conviction today, to step aside. She merely told us she expected him to do the right thing:

"I'm confident that Senator Stevens from this point on will do the right thing for the people of Alaska."

In Japan, doing "the right thing" in such a situation might involve a very sharp knife in the hands of the person who has to do it, but in Sarah's world, it usually involves a very large bus with studded tires year-round. She drives it.

She just hasn't figured out how to do it yet. She's trying to find allies on this at the same time she is making her 2012 allies, from town to town.

The chief spokesperson for the Alaska GOP was all over the media late this afternoon, saying:

"We need to continue to support Sen. Stevens. We need to vote for him because a vote for him is a vote for a conservative candidate, a Republican who best represents the interests and beliefs of Alaskans. … We don't know what happens in the future. But if you don't want Mark Begich, you vote for Ted Stevens."

I realized this evening, sitting at a Valley board meeting, that there's an incredible cognitive dissonance here. Unless Palin comes out against Stevens, if asked further about it before the coming weekend, she's endorsing her state party spokesperson's recommendation to vote for the poster child of the group most often linked with the crackdown on Alaska political corruption.

This is very big, for Alaska and the country.
Posted by Philip Munger at 10:36 PM

I'll repeat something I did over at Mudflats:

Those who cannot remember history are condemned to repeat it…

Of course, it is a classic political tactic to take on the mantle of reformer to attack a corrupt government, while really wishing to run that government the same way.

For example: here’s a description of a famous politician: who is X?

“X won fame by taking on the powerful Q (Oil Company), which he sued for unfair business practices. Over the course of his career, X continued to challenge Q’s influence in state politics and charged the company with exploiting the state’s vast oil and gas resources….

X created the Share Our Wealth program in yyyy, with the motto “Z,” proposing new wealth redistribution measures in the form of a net asset tax on large corporations and individuals of great wealth to curb the poverty and crime resulting from the Y.

Charismatic and immensely popular for his social reform programs and willingness to take forceful action, X was accused by his opponents of dictatorial tendencies for his near-total control of the state government….

As governor, X inherited a dysfunctional system of government tainted by influence peddling. Corporations often wrote the laws governing their practices and rewarded part-time legislators and other officials with jobs and bribes. X moved quickly to consolidate his power, firing hundreds of opponents in the state bureaucracy, at all ranks from cabinet-level heads of departments and board members to rank-and-file civil servants and state road workers. Like previous governors, he filled the vacancies with patronage appointments from his own network of political supporters.”

While I wouldn’t overdo the comparison, does that remind folks of anyone?

A famous movie (and then a remake) was based on his life.

For the answer, see Wikipedia.

A quick perusal may inspire more comparisons than those above.

Please feel free to use these images: