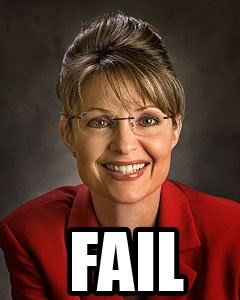 [Marcy Wheeler, author of The Anatomy of Deceit, and one of the most influential bloggers around, has written the most prescient series of articles I've read on the Palin candidacy. I've been trying to get Marcy and her husband up to Alaska to speak - and fish - since 2007. I have a hunch they'll be here in summer, 2009, covering the end game of Sarah Palin's political career]


I was one of the first to note that Palin's actions suggested she was running for President in 2012 rather than VP in 2008. But that doesn't mean I think she'd be successful. Here are my thoughts why I'm not all that worried about a Palin juggernaut in 2012.

I understand why the right has seized on Palin with such enthusiasm. They were successful with Bush because he allowed them to unify ideologically contradictory stances. Neocon imperialism and its associated crony defense capitalism is not a fiscally conservative position. Moreover, the promise of Compassionate Conservatism could only appease the charitable instincts of a lot of Conservative Christians so long. Mostly, though, Bush was only able to sustain these irreconcilable positions for five years or so by being an empty cipher--appealing to Neocons, fiscal conservatives, and Christian Conservatives--with the force of personality, thereby hiding the reality that at least one of those three groups (as it happened, fiscal conservatives and to a lesser degree, Christian Conservatives) would be ignored.

Palin is similar, only with her, the Republicans get to further obscure the emptiness of her positions with sex appeal. All the calls on Palin to lead the Republicans out of the apparent disaster they're about to undergo are premised on the hope that she can wink and demagogue her way out of the contradictions to the claims they make.

But such hopes for Palin's leadership are most likely to fail.

To understand why, consider first of all the two people who, in 2004, seemed poised to inherit George Bush's mantle: Bill Frist and George Allen. Because you can no longer hide corruption, incompetence, and ugly racism, they were completely forgotten long before the primaries started. Conditions suggest that Palin's going to meet a similar--if not worse--fate.

That's true, first of all, because the exposure of the campaign will bring some unanticipated setbacks to her. The Alaska legislature, for example, will return to consider what to do about the legislative finding that Palin abused her power. Significantly, they may well do so after she loses badly and after Republicans lose a long-held Republican Senate seat to yet more abuse of power; with each day, the reasons Alaskan Republicans would want to protect Palin grow weaker. Then there's the Personnel Board investigation, that looks like it will be way more serious--and critical--than Palin ever planned it would be. Just as potentially damaging to Palin, there are the other abuses of power: the free trips for her kids and the per diems which will be investigated and may well be taxed if not elevated into even bigger ethics problems. Just as likely, Palin may be taxed for her use of the $150,000 wardrobe. (Imagine Palin getting a $30,000 tax bill as her reward for running for VP!)

The Palins are likely to be the target of a suit by Mike Wooten's union if not Wooten himself and I wouldn't be surprised if Wooten sought custody of his kids. And then there's the possibility that further investigation of their house will reveal it was a big scam Sarah pulled on the city of Wasilla, or that the emails she has stalled on releasing will include other shockers. In short, Sarah has merely succeeded in postponing most of the repercussions that will come from the increased scrutiny until after the election--and it is by no means clear that she will escape unharmed. At the very least, her claim to be a reformer in Alaska won't fare well.

Then there's the fact that she's got at least two more years as governor before 2012--and there is no evidence that she is any more competent at governing than George Bush. So long as oil prices remain where they are, she's going to have a difficult time meeting the increased needs of an inflation-wracked Alaska. She almost certainly will continue to break her promises on spending cuts. And the only way she will be able to deliver on her thus far premature promise of a natural gas pipeline project is if she gets cozy with the oil companies she likes to claim she has taken on. So the three claims on which she ran this time--that she was a fiscal conservative, that she had taken on the oil companies and succeeded in "building" a pipeline, and that she is a reformer--will no longer be operative in 2012.

Finally, there's the fact that she is unliked by a majority of the country. Her favorability ratings are negative in most polls. She was persistently accused--even by the media--of being a shameless liar. And with WardrobeGate and YouTubes of her appearances, she is a national laughingstock.

Sure, Republicans might ignore her unpopularity. The Neocons and Christianist Industry leaders who would like to make a project of her may convince the party to embrace her anyway (indeed, that seems to be the goal of the post-election frenzy they've got planned). But they're fighting an up-hill battle because her brand is already ruined. I hope they spend a lot of energy investing in that brand rather than focusing on--say--Bobby Jindal or Charlie Crist. But I suspect they're committed to doing so because she excites them sexually, and not out of any rational assessment of whether she's the person to lead the party out of minority status.

So, in spite of all the frenzy surrounding Sarah right now, I doubt she'll be leading the party in four years. I'll do a follow-up on where I think they'll end up going. But for now, at least, Palin's concerns have to be on the immediate future, not four years from now.

this article originally appeared at firedoglake's emptywheel
Posted by Philip Munger at 7:45 AM

She excites them sexually? Do you really think this? She is pretty, but she is not arousing pretty, is she? Her skin is clear with the help of Lancome or maybe Estee Lauder, she is height and weight proportionate, but is she arousing gorgeous?

I personally don't find her very attractice - but for me personality matters....

but do the repressed conservatives find her attractive - you can see it in their faces, it's not her attracticeness per se (she's ok) - but that she flirts and strokes their ego all with subtle smiles and winks and they sit up a bit straighter thinking that smile is just for them

all rather disgusting if you ask me

Excellent article. At first I was nervous when I read she was trying for 2012, then the more I thought about it and considered all the ethics investigations she is coming to, I think she will be written off the political scene at the end of her governorship. Too tainted. But, I think she would be a remarkably weak candidate and I hope the fundies dig her out again. She is just like a televangelist! One of the attributes Palin had going for her was that she was an unknown. She no longer has this, and her negatives poll higher than her positives.

i've thought it strange for a long time that we arrived at a point where the very religious in this country are joined at the hip with a bunch of warmongering war profiteers. if i get to watch that alliance unravel it be joyful. i'm some sort of a godless commie myself, but i can see all the good that organized religion does and how important it is to people. it just seems like an unholy alliance, and fundies should reconsider their allegiances. somebody tell me i'm wrong.

You forgot the main reason she doesn't have a chance.... she's a fuckin' idiot! I'm not kidding or being sarcastic - she is no mental giant. She's a game player.

a commenter at ADN said, look at obama and biden's academic records and achievements, and then consider mc cain was at the bottom of his class and it took sarah six years and five colleges to get an undergrad journalism degree. "i'll take the smart bunch, stupid we already tried."

When does your book come out?

Here's how we'll know if she's going to try again in 2012. Two words: boob job. That will drive the guys wild!

For people who like her devastating, vicious and dishonest attacks on her political opponents - fanes like Bill Kristol, Karl Rove, FoxNews Wingnuts - Sarah Palin is HOT.

Even Alec Baldwin, who is repulsed by her politics, thinks she's HOT. She's sassy, you know?

Personally she makes me sick. She's brought the dishonesty of Rush Limbaugh to presidential politics.

Our only hope is that 51% of Americans can see through it. God save the United States of America from fundamentalists who think government means enforcing their vire of god's law.