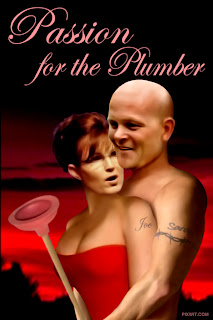 I just watched a stump speech by Sarah Palin on CNN. She's probably wasting her time, campaigning in Iowa. That's OK with me, though. And the more she spends on clothes, the less the Republican National Committee has to spend on robocalls.

Her stump speech was repetitive. If you've seen one of her speeches over the past ten days, you've pretty much seen or heard them all. She does seem fixated on one iconic phrase, above the rest:

Palin mentioned Joe the Plumber a half dozen times in her Iowa speech today. As she did yesterday and the day before. But if you go to the McCain-Palin campaign web site, and look at those same speeches, they've edited all mention of poor Joe out of the texts. Does that mean Palin is going off message in her continuously repeated references to the guy?

I don't know, but the way she says "Joe the Plumber" strikes me as a bit weird. Possibly, she's attracted to the way Joe pumped up his story about what he's done and what he wants to do, in a similar way that Palin has handled her biographical details.

Thanks for these articles - I've been following Saradise Lost since the beginning and have thoroughly enjoyed it.

Now onto a whinge :) It's about 'Joe the Plumber'. Why has the media not paid more attention to the fact that this 'ordinary man from Ohio' actually lived in Wasilla for four years? That he still has family there and in fact his brother Doug is a Dog Sled Champ - kinda like Todd Palin?

What are the odds that two men who dog sled, both living in the same small town, don't know each other?

I mean really, Joe just happened to be on the fence to chat up Obama about taxes? Really? Isn't this the same cheap trick Las Vegas Magicians use?

What is particularly interesting is that 9 days ago she supposedly begged her speechwriters not to include "Joe the Plumber" references in her speeches.

Did the revelation about her shopping sprees get her to put the references back in?