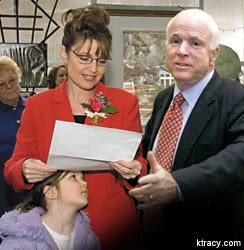 It is quite strange, seeing how the Anchorage Daily News manages to inform their readers of emerging stories about five to 72 hours after our Alaska progressive blogs manage to get the word out.

A case in point is David Hulen's post at the ADN Politics Blog from about 30 minutes ago, called Sunday Reading. For those of you who read The Mudflats, Celtic Diva's Blue Oasis, The Immoral Minority, or Progressive Alaska it was early Saturday, or even late Friday reading. Some of David's collection are "Sunday" reading, but most are from earlier.

And they've still missed the very important story by the Village Voice's Wayne Barrett, from last Wednesday, about the continual theme of abuse of Power by Palin, over her entire political career.

Another important story that seems to have escaped under the ADN Saradar, is today's important analysis, in the UK Times, of a deepening rift between McCain and Palin over just how mean and racist the campaign should be at this point. The story seems to imply that McCain has resigned himself to losing, but that Palin is bound and determined to do pretty much anything she can to rally what she considers to be her future base, should she continue to be a national political figure.

Here are a couple of snips from the Times story, by Sarah Baxter:

With his electoral prospects fading by the day, Senator John McCain has fallen out with his vice-presidential running mate about the direction of his White House campaign.


McCain has become alarmed about the fury unleashed by Sarah Palin, the moose-hunting “pitbull in lipstick”, against Senator Barack Obama. Cries of “terrorist” and “kill him” have accompanied the tirades by the governor of Alaska against the Democratic nominee at Republican rallies.


Mark Salter, McCain’s long-serving chief of staff, is understood to have told campaign insiders that he would prefer his boss, a former Vietnam prisoner of war, to suffer an “honourable defeat” rather than conduct a campaign that would be out of character – and likely to lose him the election.

Palin has continued to lead the charge against Obama’s alleged lack of candour. At a rally in Wilmington, Ohio, she mocked him for attending a supporters’ meeting in Ayers’s home when he was seeking to become an Illinois state senator in 1995. “He didn’t know he launched his career in the living room of a domestic terrorist until he did know,” Palin said.


“Some will say, jeez Sarah, it’s getting negative. No it’s not negativity. It’s truthfulness.” The crowd bellowed its appreciation with chants of “Nobama” and “Go Sarah Go!”


“To me, that does say something about character,” Palin said. “But you know, I guess that would be a John McCain call on whether he wants to bring it up.”


McCain’s allies responded by suggesting that she had her own pastor problems, such as the African minister who prayed to Jesus to protect her from witchcraft when she was running for governor.

Anyone who reads through Palin's ridiculous version of a "press conference" with Alaska media yesterday, and thinks this woman is anything remotely resembling a "realist," needs to get somewhat better informed.

I've yet to see the ADN approach the relationship between the very obvious - incredibly creepy and increasingly blatant - level of anti-Black hatred that is stoking Palin's campaign appearances, and her rise, which began with the 1996 Wasilla matoral race, and her whispering campaign that John Stein was "Jewish."

Instead, today the ADN editorialized, in a rhapsodic, selectively forgetful way, about the woman's brilliance as an energy policy wonk and achiever. Good grief! The editorial is so awful, I'm not even going to link to it.


We're going to have to live with this woman's awful campaign legacy, after she returns to Alaska in defeat on November 5th. I'd like to see some adult supervision over at the ADN, helping to steer their editors and publisher toward dealing responsibly with the spin-offs for Alaskans who are falsely linked to her malicious ideas and performance on the McCain-Palin trail.

The truth is that all of us meet a wide variety of people as we grow up, rogues and reverends, saints and charlatans, and even politicians. The truth is, each individual is stronger for the diversity of people they meet in their life journey. Overseas travel especially matures our world view, enabling us to see ourselves through the eyes of different cultures.

It is the permanent associations we choose which are important. In Obama's case, he has chosen the likes of Michelle Obama, Oprah Winfrey, Warren Buffet, and Joe Biden. The breadth of Obama's associations is uniquely wide, transcending the Anglo, African American, and Hispanic communities across the United States.

In Joe Biden's case, his permanent associations extend from childhood friends in Scranton, to his Senate colleagues of both parties, to leaders of governments across the globe.

If there is any criticism about a candidate's associations to be leveled, it would be for having too narrow a collection of associations, reflecting a narrow world view, and the inability to relate to a wide variety of people. Sarah Palin obtained a passport only two years ago, and used it infrequently. And given her unforgiving prejudgment of non-Pentecostals, the narrow candidate is Sarah Palin. Sarah Palin does not have the ability to see herself nor the United States through the eyes of others, a critical flaw in a person whose ambition would have her a heartbeat away from the Presidency.

I don't think Palin even has the capacity to see her kids through the eyes of her kids, polarbear...

I feel badly that we have not yet met, but I count my life the better for your writing, sir, as I am sure do many others. Please keep that thought in mind in the tiring days ahead.

cooking up a meeting with other Alaska progressive bloggers for sometime this coming week - I hope! - in Anchorage. Are you around? e-mail me @ mungerniklake - at -gmail - dot - com.

Your writings, as well as others for truth in Alaska, is really saving us all. Read you 2/3 times a day. I called the Alaska Demo. Party from Arizona!! to see how Ted Stevens was failing, and they gave me this blog to check out. I have passed it on to many others. I think it is time to start the Recall Process on Gov. Palin and stop all this nonsence, She is losing you all your Integrity and Money.
Keep up the good work

i have a special affection for ADN and its fabulous history and legacy. i used to deliver their paper when i was 13 [1973] and later in the '80s i had a job there for awhile in the production dept.
they gave us 14 years of mike doogan columns and they published the work of many other insanely talented writers and artists over the decades. i was ecstatic when they kicked the times' butt and won the newspaper war. in the '60s and '70s they were supported by a tiny minority that gave them just enough money to keep fighting. they were scrappy, clever, dedicated, driven.
but they have got to get their present day act together! zencey and dougherty take these pseudo-principled stands, saying they don't do advocacy journalism and they won't quote anonymous sources.
they need to get back to their roots. the old guard [kay fanning, howard weaver in the early days, et al.] wouldn't be triangulating and worried about looking 'too liberal' [whatever that entails today]. they'd be pulling out the stops, investigating and probing and trying to get at the heart of the matter.
that is what the public wants and deserves.
maybe it just isn't going to happen. the NY times and the wash post, the best newspapers in the country have similar myopic leadership and crap reporting.

Top of the Mornin' to you Philip!

It seems that it is "morning again in America" as we fight back against the evil forces of fascism. It's hard to see anything but ignominious defeat ahead for McCain/Palin due to their abominable blow-off-decency campaign.

Amy Goodman devotes the Democracy NOW! program today to Max Blumethal's reporting on Sarah Palin and a second segment on the dangers of John McCain encouraging a "wingnut" bunch of hate-filled lunatics.

***
Alternet reports Gov. Palin, the Hockey Mom from Hell, is booed at, wait for it, a hockey game...

I have been directing as many folks as I can to this blog to keep up with the truth.

Our hearts go out to all of you who have to put up with Palin when she returns after the election - I can only imagine she will be more power hungry and more out of control because she will also be very angry.

Everyone I speak with and from things I've read - we all love Alaska and repect you all - Palin is a separate entity and in no way reflects the courage, honor, and integrity of Alaska citizens.

If there is anything myself or those I know can do to help I would be willing to - calls for her impeachment? demands to have the McCain-Palin campaign investigated by the secret service for threats against an candidate? They have crossed the line of decency and totally disregard the truth - and they have come to the line of "legal" and their toes are balancing on it - a little investigation may under much more.

That is one worrisome article Ray - here I was just worried about Sarah, but it seems Todd is as big a problem as she is.

May, 2007, as a presidential candidate, McCain was a guest on Liddy's syndicated radio show. Inexplicably, McCain heaped praise on his host's values. During the segment, McCain said he was "proud" of Liddy, and praised Liddy's "adherence to the principles and philosophies that keep our nation great." From the program:

LIDDY: Your experience in the Hanoi Hilton is remarkable. I mean, I put in five years in a prison [for masterminding the Watergate burglary, and associated crimes], but it was here in the United States, and they didn't torture - the only torture that I had was being forced to listen to rap music from time to time.

McCAIN: Well, you know, I'm proud of you. I'm proud of your family. I'm proud to know your son, Tom, who's a great and wonderful guy. And it's always a pleasure for me to come on your program, Gordon. And congratulations on your continued success and adherence to the principles and philosophies that keep our nation great.

Which of Liddy's "principles and philosophies" was McCain referring to?