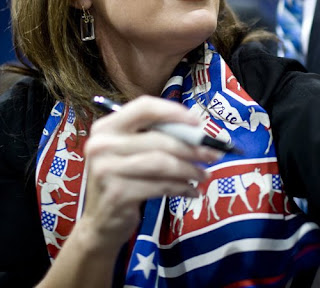 I have to say. I already had my suspicions. After all, she must have known just as well as thousands of others, how supremely unqualified for the vice presidency she really is. The whole "without blinking" meme was just the first step in her elaborate deception plan.

It was this image that came out yesterday that put the final piece into a part of the puzzle, making the remaining unplaced pieces so easy to settle into their slots and niches. By wearing a Democrats scarf, that might have cost thousands of dollars, she is sending a distinct signal:

"pssst - I knew all along I was going to destroy John McCain's chances. After all, he came in at about 1,000 votes behind Ron Paul, in the February Alaska GOP caucuses.

"I was about to endorse Obama - who trounced all the other Democrats in Alaska caucuses, when I got the call from McCain. If I ever came close to blinking (not to be confused with my secret signal winks), it was in the two seconds between McCain's question and my answer. I wanted to say, "Screw you and your anti-ANWR views," but I didn't. The rest is history.

"At the time, I suspected that Todd's Wooten stalking days might catch up to us. Soon. We needed a diversion. McCain offered it.

"And then it dawned on me: I've been fighting Republicans for years, even more than Democrats:

"What if I pretend to be a hockey mom with lipstick, while spending hundreds of thousands on designer clothes at places my trailer court base can't even pronounce?

"What if I leak the fact that I had my easily fired staff change a bunch of entries on my Alaska Governor expense reports in a self-serving way?

"What if I just stand there, like a moose caught in the headlights, when reporters ask me simple questions that even Levi Johnston could answer? Well, maybe not him, but possibly Bristol. Bristol? Maybe not, but maybe Todd? Well, we'll move along....

"If I create enough of a mess for McCain, it might even drive the numbers up on Democratic Party races all over the country, to give them a veto-proof majority in the Senate. And thirty or more U.S. House seats. Talk about sweet revenge on Randy Reudrich, huh? Obama might appoint me Secretary of State, or Treasury Secretary, or, or, or - Ambassador to Russia!"

"As long as nobody discovers I secretly converted to Unitarianism a year ago, this might actually work.

"I'll deal with Alaska later. Meanwhile, having the biggest secret ever in American politics is so much fun! It makes me feel so good, I just want to buy some more clothes. Every dress I buy keeps the RNC from making 200,000 robocalls....."
Posted by Philip Munger at 8:49 AM

How exactly does one "convert" to Unitarianism? ;>

I *really* want that scarf.

Anyone know where I can buy one?

I have been watching for Palin's 'executive ability' to break out and save the McCain campaign. Right now, Palin is getting 75% of the news, while the main candidate (what was his name?) is pushed into the background. Is that what Palin meant by 'executive ability'?

Speaking of Obama and executive ability, notice how he built a national campaign organization, figured out internet funding, deployed offices to all important precincts in every state, built his issues and positions by listening to his constituency, made a great executive decision to forego public funding, and provided steady, stable leadership throughout. Obama has been getting the best and the most out of his national campaign organization.

By comparison, the McCain campaign is disorganized, underfunded, not present in most precincts, incompetent, and has now turned to fighting internally. My favorite McCain campaign organizational decision remains their choice to chase Barack Obama into Missouri on Monday. Last weekend, the Obama campaign reaped the rewards of good preparation work, with stunning rallies of 100,000 people in St. Louis followed by 75,000 in Kansas City. So McCain's organization sends their candidate chasing glory into St. Louis on the Monday following, and he draws 2000 people. As Bugs Bunny would say, "What a maroon!"

Overall, it looks like the McCain organization is performing just like the Bush Administration - incompetent, and all Palin has brought to the ticket is her own ambition.