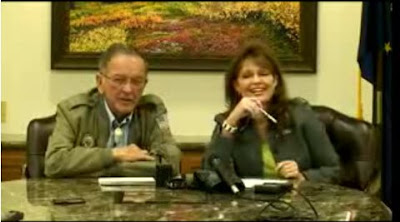 What is it about Alaskan politicians? Palin is given a $150,000 wardrobe, which she wears, but doesn't own it. Stevens was given furniture, but he doesn't own it, yet it still sits in his home. Stuff is given to them, but they don't own it? Steven and Palin must attend the same seminars on electoral ethics, or is this just an Alaska thing?

I suppose it is "an Alaska thing" more than most realize. This YouTube of Palin and Stevens, giving a joint press conference before the 4th of July weekend, shows their chuminess on another level. Stevens calls this the "Sarah and Ted Show":


Update - Monday morning: Amanda Coyne, at Alaska Dispatch, has this to say about comparisons between the Stevens and Palin excuses and protestations:

What’s worse, the reader might point out, is that barely anything is mentioned of this in our local media. Nor of the fact that at least one of those politicians can stare straight into the camera and flat-out lie. The Anchorage Daily News in its Obama endorsement today, said, rather woefully, that Palin was unprepared to be president.

Unprepared? That’s it? How about all those lies that she's told since she's been on the trail?