The Triumph of Roz Savage

The people who posted the above seem to have gotten their parts one and two mixed up.  That's her very proud mum in both videos, hugging her in the second one.  She is rapidly recovering from a broken leg earlier in the year.

To commemorate her triumph, here's a reposting of my favorite blog entry of hers from the just-finished Indian Ocean voyage: 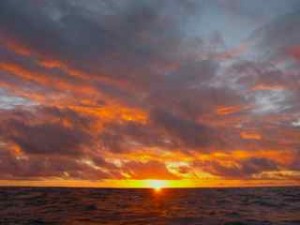 This Friday’s post is really a follow-on from yesterday’s blog in which I set out a short and optimistic vision of the future. As we already know, I am unashamedly an idealist, but as the song from “South Pacific” goes, “you’ve gotta have a dream/ if you don’t have a dream/ how you gonna have a dream come true?” Sports psychologists would agree.

Some people believe that the visualisation may be enough on its own – that by seeing it, meditating on it, and praying for it, good things will come to pass. That is fine. That is their way.

Me? I tend to take the view that while everything may come to he who waits, it will come a good deal faster to he who gets off the couch and does something to make it happen. I am a big fan of the To Do list.

When I decided to row the Atlantic, I had no clue how to do it. I knew how to row, but I hadn’t been to sea, and rowing across an ocean is more about seamanship and survival than it is about the finer points of rowing technique. So I sat down and wrote a huge To Do list – who to talk to, what books to read, what courses to take, what to buy, how much money to raise, and so on. If any single item on the To Do list looked too intimidating, I broke it down into smaller steps until it seemed more manageable. I knew that the list would grow as I went along and learned more, but at least I had a starting point.

Obviously, there is a world of difference between preparing to row an ocean – big though that challenge is – and manifesting a future for the world, or even for a single country. But just because the task is too big for a single person is no reason to give up entirely and resign oneself to being a mere passenger on this runaway train. We are all making a difference – it is up to each of us to choose what kind of a difference.

I know I am preaching to the converted here. From the comments on this blog, I know that many of my readers have already seen a vision of the future, and have carved out a niche where they can make a positive contribution towards making that vision come true – through supporting good causes, organic farming, campaigning against plastic, civil disobedience, raising their children to be environmentally responsible citizens, or whatever.

But there are still a lot of people out there who don’t believe in their own power to make a difference. They feel helpless, or hopeless, believing that anything they do is just a drop in the ocean, infinitesimal and insignificant. If I had to make a single wish for the world, it would be for every human being to realise that everything they think, say, and do MATTERS. With every action we are creating our future. We have the free will to choose our actions, and hence to influence the future of the world.

There is no point in worrying about the future – it is so much more constructive, empowering, and exciting to DO something about it.

Today has been a vivid example of the longest journey not only beginning with a single step, but requiring a lot more single steps to reach a conclusion. A second day of calm weather, meaning no miles for free. Getting there slowly, one oarstroke at a time….

Quote for the day: “Always remember that the future comes one day at a time.” (Dean Acheson)

Photo: a gorgeous sunset while I was writing this blog.
Posted by Philip Munger at 11:10 AM