Incoherence: US House and State Department Band Together to De-fund Holocaust Remembrance Education 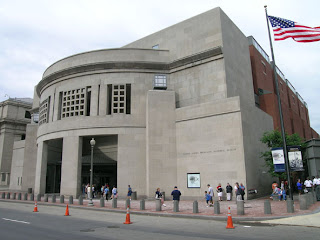 The U.S. House of Representatives, Secretary of State Hillary Clinton and State Department spokesperson Victoria Nuland all made statements this week indicating they are willing to end U.S. support for this ongoing program:


[T]eaching the lessons of the Holocaust is fundamental to establishing respect for human rights, basic freedoms and the values of tolerance and mutual respect....


....States are encouraged to develop educational programmes to transmit the memory of the Holocaust to future generations so as to prevent genocide from occurring again.


....the Organization works with The Holocaust and the UN Outreach Programme and other major specialized institutions to promote educational resources that use the lessons of the Holocaust to develop knowledge, attitudes and skills that will help students become more tolerant and prevent future genocides.

Why? Perhaps Ms. Nuland gave it an appropriate name: Incoherence.  I'll get back to the term.

UNESCO's board has recommended Palestine's membership in the UN.  The House and Obama administration are threatening to withhold U.S. funding to UNESCO because of the move:


Lawmakers on Wednesday warned the U.N. cultural agency that it stands to lose tens of millions of dollars in U.S. funding if it agrees to admit Palestine as a member before an Israeli-Palestinian peace deal is concluded.


Two top members of the House panel that oversees such funding say the U.N. Educational, Scientific and Cultural Organization could lose roughly $80 million in annual U.S. contributions if it follows the recommendation of its board and admits Palestine.


Over U.S. objections, the UNESCO board voted earlier Wednesday in Paris to recommend Palestine’s membership. A vote from the full body is expected later this month.

In the Dominican Republic Wednesday, Hillary Clinton was asked about the threat:


It is unfortunate that there is a policy to pursue recognition of whatever sort through the United Nations rather than returning to the negotiating table to resolve the issues that will result in a real Palestinian state, something that the United States strongly supports and wants to see as soon as possible. But we know that there cannot be a state without negotiations.


What is the boundary of this state that is being considered by UNESCO? What authorities does it have? What jurisdiction will it be endowed with? Who knows? Nobody knows because those are the hard issues that can only be resolved by negotiation. And unfortunately, there are those who, in their enthusiasm to recognize the aspirations of the Palestinian people, are skipping over the most important step, which is determining what the state will look like, what its borders are, how it will deal with the myriad of issues that states must address.


With respect to the question about the United States’s response, we are certainly aware of strong legislative prohibition that prevents the United States from funding organizations that jump the gun, so to speak, in recognizing entities before they are fully ready for such recognition.

HRC characterized the move by the Palestinians to seek recognition at various powerful UN agencies as a premature "threat."  Yet the State Department has said since last week that the Obama administration will ultimately veto Palestine's request for full membership at the UN, when it comes before the Security Council. The State Department's chief media spokesperson, Victoria Nuland (wife of Robert Kagan, one of the founders of the Project for a New American Century),  tried to explain to CNN's Matt Lauer Wednesday why the Palestinian move at UNESCO is not only a threat, but "Incoherent."


MS. NULAND: I’m simply saying that as a procedural matter, you have the Security Council looking into this issue. So to have a separate track in the constituent entities doesn’t make a lot of sense.


MS. NULAND: Was there a question there, Matt?


MS. NULAND: Again, our view has not changed. This is not going to create a state for them.


QUESTION: But Toria, they don’t even say it’s going to create a state for them.


MS. NULAND: It is going to make things harder.


MS. NULAND: It creates tensions that add to the environment and makes it harder –


QUESTION: In other words, it gets Israel upset.


MS. NULAND: Matt, I think I’ve said what I can on this subject.


QUESTION: Well, the problem with what you’ve said on the subject is it doesn’t make any sense, and most of the world, almost all of it, disagrees with you. A, they don’t believe it’s incoherent because they’re voting for it, and B, I don’t think you can get away from the fact that you have said you were going to veto it at the Security Council. So saying the Palestinians should wait for the Security Council to act when they know – because you’ve told them and the rest of the world – that you’re going to kill it, doesn’t make any sense.


MS. NULAND: Doesn’t change the fact that we oppose this at UNESCO.

One has to hand it to Matt Lauer for being persistent.  He has been asking hard questions about the wisdom of going up against much of the rest of the world to support the continuing and rapidly expanding colonization of Palestine, merely to keep from losing pro-Zionist political funding from the Democratic Party (and Obama 2012), and then see those funds go to the GOP instead, especially the far right GOP, which is already increasingly being funded by rich Christian Zionists.  His persistence is encouraging other journalists to realize he has not been taken out for his honesty.  So, now more journalists at State Department briefings are following him up.  And - to bring back the word - the State Department is sounding increasingly, uh - incoherent.

It is extremely incoherent to threaten to de-fund UNESCO's hundreds of important programs worldwide, merely because they agree with most of the rest of the world on an important human rights issue.  Unfortunately, it is just going to get more bizarrely incoherent in these matters, as we approach next year's election.