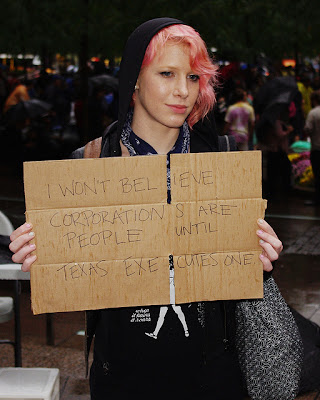 Maybe a book will be written some day, describing the growing crescendo of people around the globe pissed off at being fucked over by the rich, powerful, and governments that protect these oligarchies, aristocracies and nomenklaturas, as having started out with a courageous guy setting himself aflame in a little-known town in Tunisia.

We don't know where this is going, let alone where it might end.  One thing I'm sure of though, is that not since 1968 have I seen anything quite like it, and this is bigger, far bigger.  My only surprise so far is why more Japanese aren't taking to the streets.

There are "Occupy" protests widening across the USA.  The lamestream media (thanks, Sarah!) is finally having to cover it, after NYC saw the biggest set of civil disobedience arrests in recent history this weekend:


Will they hit Anchorage?  I've covered anti-war, anti-Palin and Tea Party protests in southcentral Alaska.  I haven't heard of any upcoming Alaska protests emulating or being inspired by Occupy Wall Street.  Have you?

And if there were demonstrations here, what would one protest against as the biggest symbol of the abusive structures people are rising up to fight?

Seriously, we don't have a symbol here that I can grasp mentally that might be an Alaska version of Wall Street.

Give me enough good suggestions here, and I'll put up a new poll.

hat tip to shankbone via Andrew Sullivan
Posted by Philip Munger at 9:48 PM

Hi y'all, I'm here in Portland, OR, and well, we haven't placed ourselves near any big symbols. We are simply gathering together. The movement is very diverse and the issues are multitude.

I really like the poster too. I think it points to the frustration we are all feeling, where can we attack first in this big mess!! It is a very big mess, and those of us who are working to analyze what can we do differently. Gee, can't we go to Walmart and order ourselves a 'change'?

Being with each other conversations happens and so does some invisible thing called community starts to form and a feeling of connection begins to be something vital that you notice that you haven't really felt before. This is a big reason to gather,where ever you can. Best of luck up there!! I miss home.