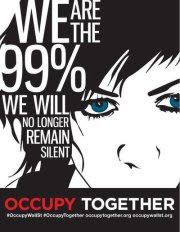 I.  Here is the announcement from Occupy Anchorage's Facebook page:


Come to downtown Anchorage next to the Anchorage Center for the Performing Arts and join us in peaceful protest in solidarity with our brothers and sisters of Occupy Wall Street! Come earlier and bring your skill set with you as we will be organizing into action committees. Share this with your friends and send out invites! It is time the other 99% stood up and made our voices heard for equality and justice!

This is a peaceful, non-violent event set to coincide with a Food Not Bombs gathering.

We will be looking for educators in the fields of; activism and non-violent protesting, economics, media, sustainability, and social and environmental concerns to host teach ins comparable to the ones being held with the Occupy Wall Street camp.

Please bring your signs, food to share, musical instruments, ideas, costumes, puppets, friends and purpose to join us for an afternoon of street theatre and conscious raising.

Stay tuned, as it may also be the beginning of the occupation for those brave enough to do so.

I've created a poll that I'm taking with me to the event.  I hope to ask at least 60 people the questions on it and other ones, too.

I polled tea party movement events in Anchorage and Wasilla in 2009 and 2010, trying to get some objective information on what was drawing Alaskans to these events, what upset them, and what they hoped for. 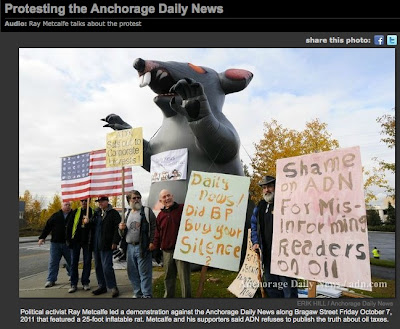 II.  On Wednesday, there was an Occupy Anchorage event, held in solidarity with the movement in lower Manhattan, and in solidarity with other such "Occupy" events around the country.  On Thursday, Ray Metcalfe, Alaska's most enduring - if not endearing - muckraker, and a small number of supporters, held a demonstration outside of the Anchorage Daily News facility off Bragaw Street.

The ADN story by Kyle Hopkins on the Wednesday downtown demonstration drew almost 500 comments, as story readers battled away on the pros and cons of demonstrating against the increasing gap between the wealthy and the rest of us in the USA.

The ADN ran a photo essay, and posted an audio interview with Ray Metcalfe, as coverage of his demonstration outside their increasingly empty building.

Here's my transcription of the audio interview:

We are one of the lowest-taxing major oil producers in the world.  The general public does not know that.  They should know that.

ADN:  Mostly indecipherable question about Metcalfe's alleged claim that the ADN "has been bought by BP."


RM:  The only reason I can think of.


ADN:  Are you - indecipherable - that the Daily News is getting paid by the oil companies to keep stories out of the Daily News?

RM:  I'm convinced that the Daily News ahs been in bed with the oil companies sunce they started taking money from Veco to publish a half page of total propoganda on behalf of the oil companies.

ADN:  Tell us what your goal here is today.

RM:  My goal here is to get publicity to bring pressure on the Daily News to start addressing the issue of how -  uh, - it's a crime - that our voters and your readers don't know that we're one of the lowest taxers of the major oil producers in the world.

Why don't they know that?  That should be common knowledge.

RM:  I have delivered articlesthat have been in the Wall Street Jounral, the Juneau Empire, New York Times, Business Week, to the folks here, and brought it to their attention, and they have refused to comment and refused to respond.

Underscoring what Metcalfe said on Thursday, on Friday, during the last hour of her KOAN radio program, Shannyn Moore  observed that the ADN seems uninterested in linking to updates on the Van Meurs Report by Fairbanks Daily News-Miner reporter Dermot Cole that directly address Metcalfe's concerns, and prove his points.  Cole has managed to obtain parts of the report on oil taxation that fully undermine contentions about our tax regime, as published recently in the ADN, and pimped by Gov. Seanico Parnellips, our chief executive on temporary loan from his permanent job as oil company attorney and propogandist.
Posted by Philip Munger at 11:09 AM

Just vote for Obama and life will be good.