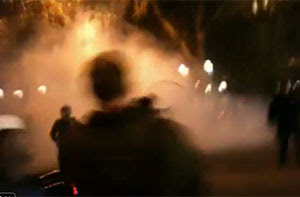 
Last night the Oakland Police force or their armed colleagues fired into a crowd of unarmed American citizens at point-bland range.  One of the weapons fired at point blank range into those citizens  struck US Marine and Iraq War veteran Scott Olsen in the face.  Within minutes after that attack, Olsen was barely able to speak.

Fortunately, tonight Scott Olsen’s roommate was able to tell Keith Olbermann that not only was Scott conscious and speaking after the head injury, but also was able to walk into the hospital.

Unfortunately, that roommate reports the injuries the Oakland PD (or one of the agencies Oakland summoned) inflicted on Scott Olsen’s head and brain are so severe his treating physicians had to place him in a medically induced coma.


…officials at Highland Hospital in Oakland said today that one protester, 24-year-old Scott Olsen of Daly City, a member of Iraq Veterans Against the War, was in critical condition.

The antiwar group said Olsen, a system administrator at a San Francisco software firm, suffered a skull fracture when he was hit by a “blunt object.” Olsen joined the U.S. Marines in 2006, served two tours in Iraq, and was discharged in 2010, the group said.
Video footage widely distributed on the Internet shows a protester, identified by the antiwar group as Olsen, being carried away by others with a head wound. While he lay wounded, the footage appears to show an officer tossing something – perhaps a tear gas canister – toward people trying to help him.

“I think it is a sad state of affairs when a Marine can’t assemble peacefully in the streets without getting injured,” said Jose Sanchez, executive director of Iraq Veterans Against the War. “We are pretty upset about it.”

When projectiles hit our skull, the kinetic energy of the projectile propagates through the skull and throughout the squishy tissues inside. Our skulls give us a measure of protection against the types of forces around when we evolved. Of course, even our hard skulls were no protection against crocodile jaws or a swipe from a woolly mammoth’s tusk. Fortunately for us, enough of us survived that sort of risk that our species survived. Unfortunately for the woolly mammoths, our species may well have driven them to extinction: they had not evolved to survive our spears and fires and clubs.

We and our big squishy brains evolved before we developed chemically powered ways of hurling projectiles at one another. Will our Republic and our freedoms survive our crowd control weapons?

Even the most extreme Creationist has to concede we were created well before we created weapon propelled canisters filled with chemical weapons like tear gas. No matter how “hard headed” we may be, even the hardest headed Marine carries their squishy brain within a skull with limited potential to absorb and diffuse kinetic energy. Chemical weapon projectiles such as tear gas canisters travel at velocities so high that the impact of these canisters can cause immediate fatal injuries. That happens when the weapons directly strike our relatively squishy throats. That can also happen when the weapons hit our skull so forcefully that they rupture blood vessels, causing massive intracranial bleeding.

Deadly injuries also happen when the chemical weapon projectiles slam into our skulls with force so great that the shock waves literally shear the long fibers – axons – which are part of our brain cells.

Many vets who survived IED explosions on the roads in Iraq and Afghanistan were hit by blast waves carrying enough energy to pass through their skull and across their squishy tender brains. Some of these vets will recover from those brain injuries: a great many others suffered brain injuries so severe that they will never recover.

I don’t know whether Scott Olsen survived AED’s or other brain-injurying attacks during his Marine service. I do know that like all Marines, he swore the Oath which begins with the promise to preserve our Constitution:


I will support and defend the Constitution of the United States against all enemies, foreign and domestic; that I will bear true faith and allegiance to the same;

I also know that last night Scott Olsen stood on a street in Oakland as an American citizen exercising his right as specified in the First Amendment to the Constitution he pledged his life to uphold as a US Marine. And I know that last night as he lawfully exercised the Constitutional right he risked his life to defend in Marine uniform, someone wearing the uniform of the Oakland PD or the “law” enforcement agencies Oakland summoned up to squash lawful protest fired the round that felled Scott Olsen.

From what Keith Olbermann reports, I know that when Scott Olsen lay stricken and motionless on the pavement a few yards from police lines, not a single one of the officers sworn to “protect and serve” came to his side.  I also know that one of the one those “law” enforcement officers waited until civilians came to his aid – and then targeted them with the explosive “flash bang” grenade that exploded next to Scott Olsen’s head.

I also know tonight Scott Olsen is in critical condition.  I know the impact of the injuries “law” enforcement inflicted upon him during his non-violent protest was so severe that it caused not only brain injury, but also skull fracture.

I wish I could say I could be as certain that Scott Olson will fully recover. Sadly, tonight I cannot be.  None of us outside his hospital can. If his severe head trauma with skull fracture is similar to that of many patients I’ve seen, tonight even his doctors may not be able to be certain he will fully recover.

But we can all be certain that the descent of American law enforcement culture and practices towards a paramilitary force that occupies our nation at the increasing peril of our rights and our Constitution last night deprived Scott Olson of his healthy brain and body, at least for a time.

To stop the same derangement from destroying our Republic, we must peacefully reclaim our public spaces and our First Amendment rights to assemble and petition for the redress of greivances from the people who go to work with guns on their belt – and from the rulers who order those public servants to take arms against us.  We must use our speech and our consciousness to peacefully reclaim America and her values and her law enforcers from the oligarchs behind the 1% and their progressive, deliberate extinction of our Republic.

When our brutish violent ancestors killed off the last wooly mammoth, they didn’t know what they were doing.   The oligarchs hiding behind Shock Doctrine and forced austerity as they kill off our Constitution and loot our future know exactly what they are doing.   FDL’s readers and the Occupy movement know exactly what the oligarchs are doing – and why.

What the Oakland PD and their armed colleagues did to Scott Olsen last night shows us all what the oligarchs will do to us – if we let them.  Which is why we must stop them by any peaceful means possible.

The Oakland Police Department is full of lazy cowards who are too stupid to disperse a protest non-violently. They love violence. They enjoy beating unarmed innocent civilians. They are exactly like the thugs used by dictators to beat dissenters in the Middle East. They are laughing about putting this guy in a coma over morning donuts right now. The OPD is a bunch of sick psychopaths who deserve to be locked up for life.

they have had lots of practice with riots in recent years so they should be the nations best prepared. might have been the Alemeda Goonies just like in the sixties.