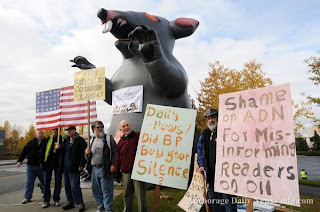 We will be hosting another protest, blowing up our giant 26 foot tall inflatable rat for the second time, in front of the Anchorage Daily News this Friday October 21st 1:00 to 3:00 PM for selling out their readers in favor of to corporate interests.
Like it or not, ADN is still the media gorilla in Alaska. A little fact checked front page news about oil taxes would discredit the claims of Hawker and Parnell and bring an abrupt end to any significant measure of support BP has for its campaign to avoid paying Alaskans a fair price for the oil they take.
Whether through campaign funds, or other means, want of money is the only logical rational for a fully informed legislator, or governor, or newspaper for that matter, to turn a blind eye and/or assist a resource extractor in a quest to take Alaska's resources for less than other resource extractors would pay if they were given the opportunity.
KTUU News argues that ADN is a private company and has the right to print, or not print as they wish. KTVA didn't see it that way and gave us good coverage two weeks ago. Click here to see KTVA's coverage of our last protest in front of the Anchorage Daily News.
"Sin of omission" is a term you've have learned in journalism. ADN's readers have a right to trust in ADN's truthfulness, and ADN has violated its moral obligation to be truthful with their readers. The  degree to which The Daily News has avoided factual reporting on oil tax issues is obvious and money for silence is only one logical reason.
Getting a fair price for Alaska's oil effects your dividend, your teachers salary, your tuition and just about every thing government service you depend on. Join us and make an impact on a local institution that has sold you out as it licks the boots of British Petroleum.
Posted by Philip Munger at 1:57 PM

Between the trials of the bastards, the email delay crap still again, Pebble and now this I have to wonder AK is trying to be the most corrupt or it is just because it a fairly 'new' state.
For having one of the best state constitutions we sure do have a bucket load of 'holes' that let a lot of pure crap run through without oversight.
Our legislators sure seem to be ignoring all this and getting very little done...frustrating to say the least!

I quit reading adn when Julia omalley blatantly lied about someone she knew saw palin running on a treadmill with her belly exposed. What a bunch o crap.

The ADN is doubly indicted today, by you and by Joe McGinniss in his current blog entry (at blog roll to right):

It’s long been obvious to anyone who’s paid attention to the rise of Sarah Palin from mayor of Wasilla to governor of Alaska and beyond that the Anchorage Daily News was her greatest enabler.

By turning a blind eye to her avariciousness, viciousness, venality and incompetence, the ADN allowed her to inflict herself, first on the state of Alaska, and then on the whole of America.

On Thursday, Oct. 20, 2011, in a speech at his alma mater, Baylor University, ADN executive editor Pat Dougherty finally ‘fessed up. “She has been such a presence for the life of our newspaper,” Dougherty said.

He admitted -– for the first time (to my knowledge) -– that the ADN promoted Palin out of self-interest.

“Our paper was actually very crucial to the rise of Sarah Palin,” he said.