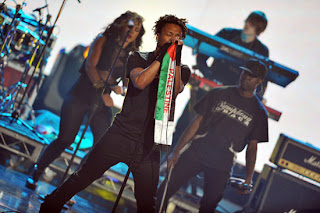 Although I’m known as a “classical” composer and musician, I’ve had a longstanding interest in hip-hop, particularly female artists and their music-poetry. Hip-hop was a “social network” long before my space, facebook and twitter. Many texting and sexting terms have been stolen from rappers, and the interchange is now a broad four-lane, two-way street.

Yesterday's rapperfest was an opportunity for this most immediate genre of popular music to pave a new lane to Occupy Wall Street.  A lot of bands missed the bus.  Lupe Fiasco all but made up for it, though.  Here's his September speech on the Palestinian UN bid:

And here is the band's presentation, Lupe's hand embracing a draped Palestinian banner throughout:


Interesting to me is how his presentation and song have been [mis]represented in the media, not least by the BET TV web page. Very few articles in the hip-hop version of the MSM even mention, let alone cover the OWS and Palestinian rights angle.

Skylar Grey, who sang the icy song part to the original hit, was subbed for at the awards by Erykah Badu, who was magnificent in her shrouded, lifting voice.

Here are the lyrics to Words I Never Said:

[Lupe Fiasco]
I really think the war on terror is a bunch of bullshit
Just a poor excuse for you to use up all your bullets
How much money does it take to really make a full clip
9/11 building 7 did they really pull it
Uhh, And a bunch of other cover ups
Your childs future was the first to go with budget cuts
If you think that hurts then, wait here comes the uppercut
The school was garbage in the first place, that’s on the up and up
Keep you at the bottom but tease you with the uppercrust
You get it then they move it so you never keeping up enough
If you turn on TV all you see’s a bunch of “what the fucks”
Dude is dating so and so blabbering bout such and such
And that ain’t Jersey Shore, homie that’s the news
And these the same people that supposed to be telling us the truth
Limbaugh is a racist, Glenn Beck is a racist
Gaza strip was getting bombed, Obama didn’t say shit
That’s why I ain’t vote for him, next one either
I’ma part of the problem, my problem is I’m peaceful
And I believe in the people.

[Lupe Fiasco - Verse 2]
Now you can say it ain’t our fault if we never heard it
But if we know better than we probably deserve it
Jihad is not a holy war, wheres that in the worship?
Murdering is not Islam!
And you are not observant
And you are not a muslim
Israel don’t take my side cause look how far you’ve pushed them
Walk with me into the ghetto, this where all the Kush went
Complain about the liquor store but what you drinking liquor for?
Complain about the gloom but when’d you pick a broom up?
Just listening to Pac ain’t gone make it stop
A rebel in your thoughts, ain’t gon make it halt
If you don’t become an actor you’ll never be a factor
Pills with million side effects
Take em when the pains felt
Wash them down with Diet soda!
Killin off your brain cells
Crooked banks around the World
Would gladly give a loan today
So if you ever miss a payment
They can take your home away!

[Lupe Fiasco - Verse 3]
I think that all the silence is worse than all the violence
Fear is such a weak emotion that’s why I despise it
We scared of almost everything, afraid to even tell the truth
So scared of what you think of me, I’m scared of even telling you
Sometimes I’m like the only person I feel safe to tell it to
I’m locked inside a cell in me, I know that there’s a jail in you
Consider this your bailing out, so take a breath, inhale a few
My screams is finally getting free, my thoughts is finally yelling through

[Skylar Grey]
It’s so loud Inside my head
With words that I should have said!
As I drown in my regrets
I can’t take back the words I never said

Sort of reiterating, getting back to media coverage of Lupe’s presentation: Not just BET TV, but the hip-hop and other media in general seem to be slow or unwilling to cover the statement, or the thrust of the song presentation’s imagery as newsworthy. Allhiphop.com’s story, that highlighted the pro-Palestinian presentation, has been pulled. If you google for stories about the Palestinian aspects of the performance, there are no news stories at this time.

Yet the band’s continuing efforts to support OWS are being covered, which is good.  They were in Oakland today, raising money for cold weather gear for the movement:


Occupy Wall Street got a visit from Kanye West (in his very expensive-looking chain, natch), but over in Oakland the 99% got a more useful visit from fellow Chicago rapper Lupe Fiasco. Mr. Fiasco, who was in town to play the Fox Theater last night, tweeted yesterday afternoon asking if any of the Occupy SF or Oakland encampments needed any supplies and, according to one occupier's account on IndyBay, he "came through, perhaps more than expected, with donated food, supplies, tables, tents, and a generator."

Posted by Philip Munger at 9:03 PM

Nice! Lyrics always win. Grey did the darn thang!
I live here and didn't know he was in town. I stop by from time to time, glad i did today. Will tweet the link.