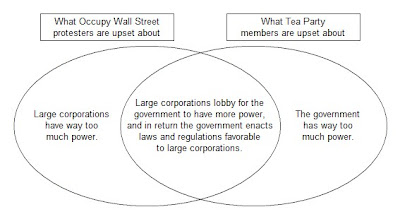 This diagram of overlapping aspirations seems genuine, in regard to the hopes and gripes of people attending both OWS and tea party events.  But there are major differences in the ways the two movements are funded.  We've yet to get a good look at where the long-term money helping OWS's staying power might come from.  Even though it has been around a while, its public face as covered by the MSM is brand new.

I was surprised by how much the tea party events from April 2009 though the 2010 elections were covered by the MSM.  I'm not surprised by how little the MSM has covered OWS.  The media made the TP people seem much bigger, more self-motivated than they actually were or are, and are now trying to paint  the OWS folks as being manipulated behind the scenes by organizations or forces with very tenuous connections to what the movement seems to actually be.

I've been here in Alaska to cover both movements, and plan on continuing to do that.
Posted by Philip Munger at 7:19 AM

"The Billionaire's Tea Party" and hope to show it at UAA in the next few weeks.

own interests. We'll let you know the date times are Fridays at 7:00pm.
http://www.youtube.com/watch?v=uB2d-1PRvO4
Keep up the Good Work Tom

Thanks, Tom. It is a great film.

Here's the difference. Tea Party people generally expect to work for a living and pay taxes, but want government to spend their taxes appropriately.

The OWS expects the rich to pay more taxes so the government can use that tax money on THEM. They don't understand the concept of working your way up. They are the "entitlement" generation. How dare someone have more than them! Regardless that in general, the TeaParty consisted of responsible seniors who have worked and been taxed their whole life.

The great thing about America is that everyone has a chance to be rich. Those that aren't haven't probably tried.

Also, love how the Nazi Party have joined the OWS...notice all the anti-semitic signs at their protests? Guess that labels the whole movement, right?

Tea Partiers-no arrests, know what they want, no garbage left behind

OWS-violent, lots of arrests, don't know what they want, lots of garbage left behind


Have you seen the hysterical interviews of wacko responses? Too funny. What is not funny is their growing anti-semitism, as the previos post suggest.