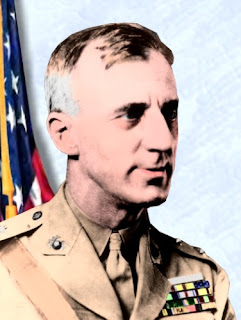 I.  In 1933 a group of conservative Republican Wall Street financiers, prominent among whom was Prescott Bush, the father of George H. W. Bush, approached USMC Gen. Smedley Butler, with a proposal to lead a coup against President Franklin D. Roosevelt:


A BBC Radio 4 investigation sheds new light on a major subject that has received little historical attention, the conspiracy on behalf of a group of influential powerbrokers, led by Prescott Bush, to overthrow FDR and implement a fascist dictatorship in the U.S. based around the ideology of Mussolini and Hitler.

In 1933, Marine Corps Maj.-Gen. Smedley Butler was approached by a wealthy and secretive group of industrialists and bankers, including Prescott Bush the current President's grandfather, who asked him to command a 500,000 strong rogue army of veterans that would help stage a coup to topple then President Franklin Delano Roosevelt.

According to the BBC, the plotters intended to impose a fascist takeover and "Adopt the policies of Hitler and Mussolini to beat the great depression."

Gen. Butler turned the offer down.  The 1934 congressional investigation and hearings, held under the purview of the House Un-American Activities Committee, that looked into allegations of the coup plot show that almost 80 years ago, Wall Street perfidy was remarkably resilient to investigations or credible claims leading to actual indictments, prosecutions or convictions, and that the media was more than marginally complicit in minimizing and covering up:


Given a successful coup, Butler said that the plan was for him to have held near-absolute power in the newly created position of "Secretary of General Affairs," while Roosevelt would have assumed a figurehead role.

Those implicated in the plot by Butler all denied any involvement. MacGuire was the only figure identified by Butler who testified before the committee. Others Butler accused were not called to appear to testify because the "committee has had no evidence before it that would in the slightest degree warrant calling before it such men... The committee will not take cognizance of names brought into testimony which constitute mere hearsay."


In response, Butler said that the committee had deliberately edited out of its published findings the leading business people whom he had named in connection with the plot. He said on February 17, 1935 on Radio WCAU, "Like most committees it has slaughtered the little and allowed the big to escape. The big shots weren't even called to testify. They were all mentioned in the testimony. Why was all mention of these names suppressed from the testimony?"

A New York Times editorial dismissed Butler's story as "a gigantic hoax" and a "bald and unconvincing narrative."  Thomas W. Lamont of J.P. Morgan called it "perfect moonshine." General Douglas MacArthur, alleged to be the back-up leader of the putsch if Butler declined, referred to it as "the best laugh story of the year."

Time magazine and other publications also scoffed at the allegations.

When the committee released its report, editorials remained skeptical. Time wrote: "Also last week the House Committee on Un-American Activities purported to report that a two-month investigation had convinced it that General Butler's story of a Fascist march on Washington was alarmingly true." The New York Times reported that the committee "alleged that definite proof had been found that the much publicized Fascist march on Washington, which was to have been led by Major. Gen. Smedley D. Butler, retired, according to testimony at a hearing, was actually contemplated".

II.  Bring us forward to this coming week on Wall Street, with the possibility of what I call Gen. Smedley Butler's Revenge:

The video above hasn't exactly gone viral, but we'll soon see whether or not it is overblown or a hoax.

Time for a disclaimer:

By linking to material related to the above video, this site is not advocating participation of active duty or reserve members of the U.S. armed forces in the ongoing Wall Street protests or others related to those acts of civil disobedience.

I checked around this evening, to see if the claim made in the YouTube has veracity.  At a Daily Kos diary on it, there doesn't appear to be anything definitive about a USMC contingent actually having been organized.  The guy doing the video has been tagged as a U.S. Army Vietnam-era Vet (he looks young for that - I'm in that particular category).  This is supposed to be a clarifier from the person who is in the video:


To all my Facebook friends....PLEASE note that the message from the Marine who is going to "OccupyWallSt." with his buddies was sent to one of the co-organizers of our organizing team for the Oct.6 action in D.C.

I am NOT the Marine that sent the message...(I was Army Infantry, '71-'74)....MANY hundreds of my fellow veterans are doing the same thing in D.C., starting on Oct.6. I simply shared the fine message from the Marine. :>) ....thank you all for making that message go viral.

The YouTube poster claims to be a "Tea Party Patriot," which may or may not be identification with the sub-set of the Tea Party movement that actually bears that name.  My experience with that organization in my own community is that they tend to be very white, quite evangelical, and attracting the most ardent gun nuts, while keeping away from the Koch Brothers' astroturf people and organizations.  They are predominantly Paulites here, except in my hometown, where they were - until recently - followers of their local star.

We'll see if some Marines actually show up this week.  If they do, and aren't agent provocateurs, it might be a game changer.

And, if they're genuine, I can see Gen. Smedley Butler laughing wherever he might be.
Posted by Philip Munger at 9:14 PM

Will the Aliens please bring back the real Phil.