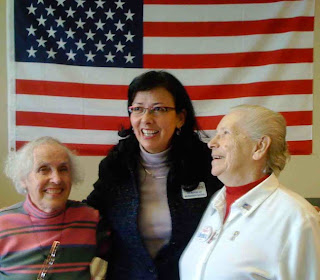 According to information available, the Alaska blog, The Mudflats, has mentioned Diane Benson in a total of six articles, over the history of the sometimes progressive web site, which has one of the larger followings in Alaska.  The blog didn't exist until late in Benson's 2008 U.S. House primary run against former Rep. Ethan Berkowitz, who defeated Benson, and went on to challenge Rep. Don Young, who Benson had challenged in 2006.  During Benson's successful run for the Lieutenant Governor slot on the 2010 Democratic Party ticket, The Mudflats carried three articles tagged with Benson's name, but one of them doesn't appear to even mention her.  One of the others comes as close as the blog has ever come to having something positive to say about Benson.  It was an October 22, 2010 report from the Fairbanks Alaska Federation of Natives Conference:


In 2006 Diane Benson stood and delivered a challenge to entrenched corporate favorite, incumbent congressman Don Young. Benson did this, by the way, when other perceived ‘stronger’ Democratic candidates ran for cover and refused to challenge Young. Benson was excluded from the podium despite the fact that Young, a member of the congressional delegation, was allowed to campaign wearing the thin disguise of ‘reporting’ to the convention. The excuse at the time from President Julie Kitka and her convention manager, Mike Irwin, was that AFN did not endorse, or do ‘politics’. A challenge was elicited from the floor and a group of Benson supporters won her 5 minutes in front of the convention to say her piece. And, in one of the most brilliant and audacious maneuvers I have ever witnessed in Alaska politics, Benson was ushered to the stage surrounded by a squad of Native Alaskan veterans. In traditional Tlingit fashion, Benson delivered a story that lasted far longer than five minutes, as the veterans kept a jittery Mike Irwin at bay. At the end, she received a standing ovation and on Election Day, she carried a large portion of Village Alaska.

Shortly after the 2010 election, on November 15, 2010, The Mudflats carried a strange post that mentioned Benson's role, playing a judge, in a B-grade film produced by Alaska conservative political gadfly, Dave Cuddy:


And I would be remiss if I did not mention that former Democratic Lt. Governor candidate Diane Benson plays the federal judge. Sigh…

No mention of Diane Benson's pivotal role in the development of equal pay for Alaska Natives on the set here.

No mention - EVER - at The Mudflats, of Benson's key role in the inspiration for, making and marketing of what many regard to be the best civil rights film in Alaska history.

No mention - EVER - of Benson's extremely courageous role over decades, in getting help to victims of sexual abuse and domestic violence.

At the time, I commented about the lack of context the article had seemed to be giving Benson:


From your description, Christmas With a Capital “C” sounds like it will disappoint. Par for Cuddy’s course.


I’m curious as to why you wrote “And I would be remiss if I did not mention that former Democratic Lt. Governor candidate Diane Benson plays the federal judge. Sigh…”


Have you seen the part of the movie played by the judge? Have you spoken with Ms Benson about her role in this movie?


What do you know about Ms Benson’s role in the history of filmmaking and dramatic art in Alaska?


Do you remember her actions during Steven Seagal’s filming of “On Deadly Ground” that led to far higher pay for the Alaska Natives hired to perform?


Do you remember her play criticizing the leadership of Alaska Native Corporations that was then banned by the people who commissioned it?


Did you write at this blog about Ms Benson’s role in the film “For the Rights of All – Ending Jim Crow in Alaska”?


What significant post have you put up at this place about Benson’s role in Alaska civil rights and women’s rights? There may have been one, but I seem to have missed it.


Is my snark meter unplugged, or was your comment about Diane a diss of some vague and unqualified sort?

And your snark meter blew a gasket. I’m not writing a post about Ms. Benson’s career or Native rights. I simply sighed because someone that I like is involved in the project called Christmas with a Capital C. You may feel free to write whatever you like on your blog. I would hope that if Ms. Benson found my sigh to be offensive, she would contact me herself. Take a deep breath and Happy Holidays. AKM

Looking back, it is more than faintly ironic that, at least according to Frank Bailey, Devon was under contract to Bailey at the time she wrote the above and criticized Benson, to, as Geoffrey Dunn so eloquently has put it, help write a book that amounted to a whitewash of Troopergate, and Bailey's role in it:


[S]ignificantly, there are some serious missing pieces in Bailey's book that he either never addresses or sweeps under the rug-omissions that raise serious questions about the various government investigations into Troopergate and strongly suggest these investigations be reopened.

So, why am I bringing this up now?  Because Jeanne Devon has written about Diane Benson again.  Finally.   Two Alaska political ads from the past few years have been named to a list of the truly worst.  One of them is a Benson ad, where she cares for her sled dogs.

I only discovered that The Mudflats was carrying the article when one of its tags showed up in a google alert for Diane Benson.  The tag Devon created is called:

This would be less disconcerting if The Mudflats had had more honest, in-depth coverage of Diane Benson over the three-plus years the blog has existed.   Linda Kellen Biegel, who writes there, is a close friend to Diane.  But, beyond that, if anything, I've felt at best, a mild disdain for Benson at the popular blog.
Maybe The Mudflats could create the following Diane Benson tags:

I doubt it.  I think Jeanne will let this stinking mess lie where she put it.
Posted by Philip Munger at 11:21 AM

I like Jeanne and The Mudflats, but I think you've hit on something here. I've known Diane for several years now, and I just don't understand why she is so disrespected in this community, not only by her enemies but seemingly by people who should be her allies, as well.

I quit reading Mudflats some time ago, as it appeared to be almost cult like... if you said the ~wrong~ thing you were descended upon by hornets...

Not much room there to have your opinion posted let alone not descended upon by stingers.

She's got her following and is happy with it. So what.

It's not a democratic blog for sure. That bunch seems to claim to be progressive, LOL, nazi-ism is more like it.

WTG Phil!! I have lost all respect for the Mudflats. I too think it has become cultish and also seems like the only motivator over there is making money off that awful book and the scandal surrounding it.

I am greatly saddened by Jeanne's continued downward spiral. I used to enjoy her blog and enjoyed guest blogging there occasionally. But it's all gone to hell over there. Heck I was banned b/c I questioned Snoskred and tried to have a civil discussion with her about fundraising for a local DV shelter here.

Now I am banned from the forum and gave up trying to comment on the blog b/c all my comments go into moderation.

It's all quite sad. It's sad that SP is pulling so many people down with her, even her enemies.

WTF? Is this all about trying to revive Benson's political positioning for 2012 (a thankless and futile task for this multi-loser), or is it about Phil's irrational infatuation with the myth of Benson? Whatever -- I had hoped she had slipped over the horizon.

as an avid reader of the mudflats i was taken back by this article. although, not an alaskan, i remember very well that jeanne is quite the fan of mz benson. i know of at least one very positive post re mz benson:
december 18, 2009 mudflats
http://www.themudflats.net/2009/12/18/diane-benson-to-run-for-lieutenant-governor/

This has less to do with Benson than with Phil being due for another round of drive-by cattiness toward someone with the audacity to be a better writer, produce a better blog and (unsurprisingly) generate far more hits than his own. Step One toward closing this presently vast qualitative gap may be for Phil to acquire something approximating a sense of humor in lieu of being a self-righteous blowhard who takes himself far too seriously.