A Lesson for Obama: Argentina's Cristina Fernandez Re-Elected in Landslide for Reducing Income Gap Between the 1% and 99% 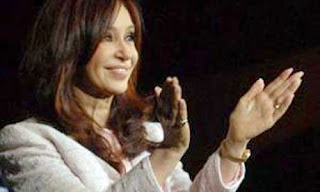 Argentina's incumbent president, Cristina Fernandez de Kirchner, won re-election Sunday, in a landslide.  She is the first woman to be re-elected head of state in the history of Latin America, or the Americas, for that matter.  Unlike the first American woman head of state to be directly elected, Nicaraguan President (1990-1997) Violeta Chamorro, Fernandez has steered a populist course that has increased public wealth, sharply reduced disparities in income between the top 1% and the 99% of the rest of Argentines, strengthened social welfare programs, and has overseen an economy whose growth has barely slowed in a global financial climate that has throttled ours.

The contrast to Chamorro's policies in Nicaragua to those of Fernandez couldn't be more stark:


Chamorro controlled hyperinflation and attempted to turn to a neoliberal model outlined by the Mayorga Plan by attempting to re-integrate Nicaragua into the world market, increase foreign investment while reducing foreign backing, and increase privatization, however this plan was very unpopular in Nicaragua.


he plan failed to solve the overwhelming economic devastation of Nicaragua and was coupled with a rise in unemployment and underemployment.

Further aggravating the plight of the poor, in order to control inflation Chamorro was forced to cut government spending by eliminating social programs, particularly for females, though she did encourage the development of a strong educational system. [empasis added]

Fernandez didn't inherit hyper-inflation when she took office 38 months ago.  She succeeded her late husband, Néstor Kirchner, in the first spousal presidential succession in history that did not involve the death of one of them.   Néstor Kirchner passed away a year ago, succombing to a heart attack on October 27, 2010.  Under her husband, policies rejecting subjection to the International Monetary Fund and global corporations were incorporated.  Kirchner had made a name for himself as Governor of Santa Cruz province, for "eliminating unproductive expenditures and cutting back on tax exemptions for the key petroleum industry."

As president, Kirchner was immediately faced with a country on the verge of default, with over $178 billion in debt, and virtually no cash:


On 15 December 2005, following Brazil's initiative, Kirchner announced the cancellation of Argentina's debt to the IMF in full and offered a single payment, in a historic decision that generated controversy at the time (see Argentine debt restructuring). Some commentators, such as Mark Weisbrot of the Center for Economic and Policy Research, suggest that the Argentine experiment has thus far proven successful.  Others, such as Michael Mussa, formerly on the staff of the International Monetary Fund and now with the Peterson Institute, question the longer-term sustainability of Pres. Kirchner's approach.

In a meeting with executives of multinational corporations on Wall Street—after which he was the first Argentine president to ring the opening bell at the New York Stock Exchange—Kirchner defended his "heterodox economic policy, within the canon of classic economics" and criticized the IMF for its lack of collaboration with the Argentine recovery.

Cristina Fernandez continued her late husband's fiscal policies, and the most powerful figure in government financial restructuring in the early 2000's Amado Boudou, became her Minister of the Economy in 2009, and was her running mate in this week's election.  Michael Warren of the AP, wrote Monday about the Fernandez-Boudou team:


President Cristina Fernandez chose Amado Boudou as her running mate not just because of his youthful appeal, a key factor now that she's a 58-year-old widow limited to a second term in office. Boudou also was a key player in several unorthodox decisions, such as nationalizing the pensions and using foreign reserves to pay down debt, that enabled her to spread the country's wealth among the poor and working classes.

And this, in turn, helps explain how Fernandez came to be re-elected Sunday with perhaps the widest victory margin in Argentine history, and 54 percent of the vote.

How did she and Boudou do this, in a world where leading economies are slowing and smaller countries are swallowing unpopular austerity measures in exchange for financial lifelines?


Since Fernandez and her late husband and predecessor Nestor Kirchner moved into the presidential palace in 2003, they presided over one of the longest periods of economic growth in the country's history - growing twice as fast in real terms as the economic powerhouse of Brazil, and faster than any other nation in the world save China and India, according to the Washington-based Center for Economic and Policy Research.
The Kirchners also cut the wealth gap - the difference in income between the 95th and 5th percentile - nearly in half by nearly tripling social spending in real terms, economist Mark Weisbrot said.

They rebuilt Argentina's industrial capacity after the 2001 economic collapse, creating jobs, lowering poverty and putting disposable income into many more pockets. They did it by either trying to mask or ignore the high inflation their spending encouraged, preferring to keep the economy moving. As a result, shops are open, business is thriving, and people are buying new cars and televisions like never before. [ emphasis added]

There are certainly lessons in the achievements of Argentina since bouncing back from their collapse ten years ago.   The foremost seems to be that selling off public assets to pay for government debt incurred through adherence to unsound schemes brought forth by the IMF, Wall Street or international corporations does not have to happen.  Not just at the national level, such as is happening in Greece right now, but on the state level, as is happening in so many U.S. states, such as Wisconsin, Ohio and Michigan - for starters.  Alaska is under tremendous pressure to lower taxes on oil companies, as was Néstor Kirchner when he was governor of Santa Cruz.

He survived politically, and rose to the top of the country's politics and policy making, by doing the exact opposite of what the "too big to fail" 1% gang keep shoving down our throats here and in Europe.  Standing up to international monetary pressure and using sound internal control practices, brought his country's citizens unprecedented long-term benefits.

Cristine Fernandez stands poised to possibly extend this boom, sustained by a country unwilling to bow to Wall Street, the IMF, or U.S. government pressures for over a decade.

Posted by Philip Munger at 4:32 PM