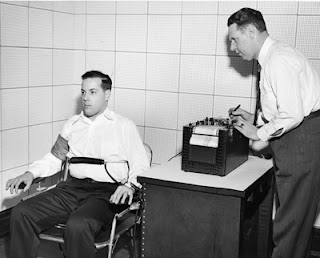 On Wednesday, Dr. Jeffrey Gleason, currently an avian ecologist for the the Bureau of Ocean Energy, Management, Regulation and Enforcement, was questioned by agents from the the Obama Interior Department Office of Inspector General about aspects of his involvement with Dr. Charles Monnett's 2006 peer-reviewed scientific paper that linked Polar bear mortality while swimming in the Arctic to climate change.  Dr. Monnett has been under investigation since late 2010.  Scrutiny of Dr. Gleason's actions related to the Polar bear findings dates back to his first interview, held on January 26th.  His questioning on Wednesday resulted in a request by the investigators for him to undergo a lie detector test regarding a misplaced routing slip:


[The Federal agents] Spent nearly a quarter of the two-hour Gleason interview discussing a misplaced routing slip on an internal agency poster regarding sea ice retreat that was ultimately approved by the agency.  IG Agent Eric May, who claimed to have found the one-third page routing slip “in the trash” asked Dr. Gleason to take a polygraph test on whether he was trying to hide it.


The IG also confirmed that it had named Dr. Gleason in a criminal referral but repeatedly refused to say what the basis for a criminal accusation might be.  In its questioning, the IG again used comments by peer reviewers to suggest that something untoward had been done.

Public Employees for Environmental Responsibility (PEER) is representing both scientists in this strange investigation that strikes most, at best, to be misguided and misplaced.  At worst, it may be intentional savaging of the careers of two highly-respected wildlife scientists, to make them into examples for having created a scientific study that ended up being emblematic of the dangers of global warming.  Here's attorney Jeff Ruch, from PEER:


At this point, the IG agents appear to be desperately grasping at straws to justify this 18-month fiasco of a probe.  his investigation is making Interior’s Office of Inspector General an international laughingstock.


When this interview transcript is published, it will reinforce why it is utterly inappropriate to have criminal investigators assessing how scientific publications are edited.

According to PEER, their advocacy group:


has filed a formal complaint that any charges of scientific misconduct or bias should be handled not by untrained criminal investigations but instead should be referred to Interior’s process for handling any allegations of scientific misconduct through professional review.  Interior officials have publicly pledged to follow that process but it is unclear why it is not being followed in this case.

Since I last wrote about "Polarbear-gate,"  we've seen disturbing connections between the State Department and Keystone XL, regarding the environmental impact assessment by the Department of the tar sands pipeline, and the granting of offshore drilling permits to Shell by the administration, for their Arctic area projects.

Other firedoglake articles on this case:

With Obama’s Giordano Bruno-ization of Dr. Charles Monnett in Alaska, We See the Merging of the War on Science and the War on Whistleblowers