Alaskan Use of the Term "Niggerhead" 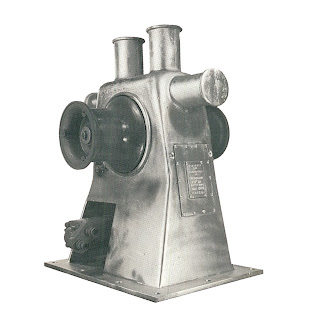 I woke up in the middle of the night, breaking off a dream where I was fishing in Cordova in the old, old days.  Our skipper,  Pete Isleib, was yelling at us on deck of the FV Murrelet to wrap the purse lines around the "niggerhead."  Fast!

I chuckled a bit, went back to sleep.

This is an image of the winch used on purse seine fishing vessels.  It is both a capstan and a bollard.  It was commonly called a niggerhead in Alaska when I fished full time in the mid-70s to early 80s.  Today is the first time I have thought about the term and its use in a long time.

Sure enough,  Andrew Sullivan has a short piece today on uses of the term around various parts of the country, and the article includes a note from an Alaskan:


I have been a commercial fisherman in Alaska since 1975.  My first year I worked on two boats, purse seining for salmon in Southeast Alaska. The winch that the purse line was tightened up with was called the "niggerhead". Everyone used the term to reference the seine winch. This link is to a picture of the winch on the Kolstrand Marine Equipment website. The term "niggerhead" specifically referred to the two black spools on either side of the stand.

Some of my skippers used the term.  Others called it "the winch."  My second boat, the 30-foot FV Swanee, was a combination purse seine-gillnet boat, and had a small version of the winch shown above.  The year I owned it - 1974 - there was no purse seine season, as Prince William Sound was still recovering from the effects of the Good Friday Earthquake on Pink salmon spawning grounds.  So I never got to have to decide whether to yell at the crew "wrap the line around the niggerherad," or "wrap the line around the winch."

Does anyone know if the term "niggerhead" is still in common use for these winches?  Or for other logging, mining or construction equipment?
Posted by Philip Munger at 7:39 AM

@7:56 --- is it offered in both circumcised and uncircumcised versions?

The term is also used to describe the clumps of vegetation that stick up out of the muskeg swampy areas and make walking difficult as you have to walk on top of them, or in between them in the muck.

I grew up in the Deep South. The term was so pervasive that I didn't even realize I was using a derogatory term for quite some time - the cluelessness of youth. One time my car broke down and I limped into a rural mechanic shop in South Ga. I told the black mechanic that I had "nigger-rigged" it to get it to the shop. He just laughed at my sorry white ass and said I did a good job and fixed my car. I never used the term in any way again I was so embarrassed! And I still cringe when I think of it over 40 years later.

Hedgewytch is right that the term is still used for tussocks of grass in Alaskan swamps. The first time I heard it I was not very happy and still refuse to use that term. I have a cringy-worthy moment myself. I used the phrase, referring to bargaining on a price, "to jew it down". I was so embarrassed to find out from the Jewish friend I was speaking to that it actually referred derogatorrily to Jewish people. I had no idea at the time. Will never forget and never use the term again.

"I told the black mechanic that I had "nigger-rigged" it to get it to the shop."

--- In Cordova and SE AK I've heard that term. Also, interchangeably, "siwash-rigged," or "siwashed together." That's a derogatory term used all through the Pacific NW, including BC, for something doen half-assed, and - as part of the negative connotation - implies "done like an Indian (or Alaska Native) would do it."

The term also is used in East Coast fisheries and has been for decades. Not defending it, just sayin...

Where does the word siwash come from? I have heard this word in the Lower 48.

"Siwash, sometimes spelled Sywash is not the name of any particular language. It is the Chinook Jargon word for "Indian" and in context may refer to any First Nations language. It comes from the French word sauvage "wild" and so originally had a somewhat pejorative sense, though it should be noted that French sauvage is more accurately translated "wild", in the sense of "undomesticated", than by the similar-looking "savage". Horses that live on their own, for example, are chevaux sauvages, "wild horses", which does not suggest fierceness or savagery. In Chinook Jargon it did not necessarily have a pejorative sense and was sometimes used by First Nations people to refer to themselves, but at present it is generally considered offensive."

every shrimp boat I have ever worked on had a niggerhead,including the ones owned and captained by salty black men?

I had a friend whose father was from Oklahoma who always referred to some FUBAR thing lashed together as an "Okie Arrangement".

Ugh. Yes, this one's still heard among the SE troll fleet, too. Last time I worked for a captain who used this term (and all the others you can imagine) was over 12 years ago, and inspired me to take a long hiatus from commercial fishing! Pretty thankful for the shift in thinking that's (slowly) taking place in our fleet.

I had an encounter with another troller this season who was describing an accident someone had had, getting wrapped up in the "capstan." I'd never heard the technical term, questioned him. "I won't use the other term," he responded. And with that, I knew what device he was talking about.

I see on the website that sells the winch that they changed the name to Gypsy Head, which is still racially referring to some group of people. The idea that anyone can't get it through "THEIR" head that referring to any race as if that is socially acceptable now is OKAY, as long as they aren't the politically incorrect one of the day, minute, hour, or even the month, then, that is ridiculous. In a country that brags about being free and equal we still divide ourselves up to keep ourselves separate some way or another. SAD! If race doesn't matter, then quit describing everyone by it. If it does, then grow up and get over it. Mean what you say and say what you mean.

Gee, do you think it is time we started telling racists of all races and types that being racist is an archaic (outdated dinosaur thinking), self-centered, ignorant, backwards, not socially conscious, not humanistic, incorrect, and that being politically incorrect when it comes to other human beings is just plain WRONG? Oh, that's right, we did that in 1964 when L.B.J. signed the Civil Rights Act but, a whole 47 years later, the Least Intelligent of AMERICA just can't get it through their head that their ignorant opinion don't matter to anyone but themselves. This is the politically incorrect crap that idiots think is laughable until it comes back to roost in their next career move.

I heard the term used to discribe the winch on the side of an electricians line truck that is used to pull electrical cable. Of course that was also on a Navy base.
John