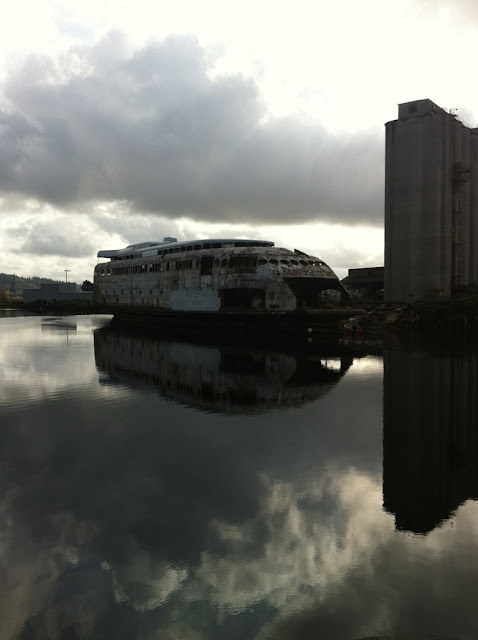 Freddie, my former bodyguard, has moved to Puget Sound, and is working on tugboats between there and Alaska.  He was down in Tacoma the other day, in Hylebos Waterway, where the legendary ferry Kalakala is moored and sort of wasting away.  He took some pictures and sent them.  Above, it is mirrored in the still waters of the Superfund waterway.

I was closely involved in the resurrection of the Kalakala from Gibson Cove on Kodiak Island, from September 1994, to its arrival in Seattle in October 1998.  My closest friend, Seattle sculptor Peter Bevis, was its salvor.  I was dead set against the project, but once Peter committed himself to the task, I backed him, traveling down to Kodiak several times at various stages.  In March, 1998, Judy and I took the kids down there for spring break, to help on the restoration for a week.

Here's a picture I took of the vessel in Seward, on its voyage back from Alaska to Puget Sound: 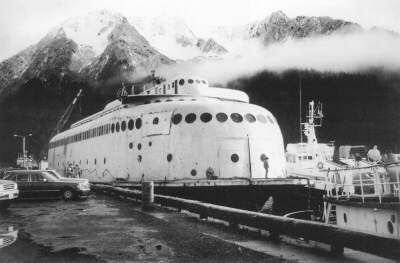 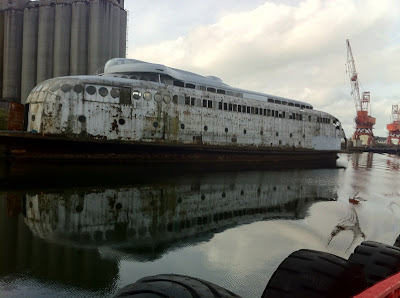 And here is the Kalakala, underway between Bremerton and Seattle, during her heyday: 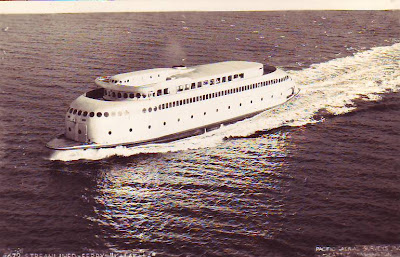 Yup - That's the Kalakala in its present state, alright ! The most recent news that I recall is per the following link: http://www.thenewstribune.com/2011/05/04/1651693/kalakalas-own

It was seriously listing back in March 2011 and Citizens for a Healthy Bay in Tacoma were concerned then about the potential environmental damage that could be done as the Kalakala continues to deteriorate.

Thanks for posting your involvement in its restoration. It's a pity she's not the gal she once was. I saw the list in March. It wasn't pretty.

Peter lost the boat back in 2005 to a guy who has had to move it from place to place, hoping for restoration funds. If Peter couldn't raise the restoration funds back when Seattle was in its best financial state in history, it is hard to imagine raising them now. Hate to say it, but the boat is probably not long from being made into razor blades.

It cost my best friend 11 years of his life and $3 million, so I'm not fond of a boat that looks like it was designed by Buckminster Fuller while suffering a severe hangover.

I remember the Kalakala being moored on Lake Union under the I-5 freeway bridge in Seattle in the late '90s through at least 2002. She looked really sad then -- I hate to think what 20 years more has done to her.

I also remember the Kalakala in her heyday, because I used to live on an island in Puget Sound in the '50s and early '60s, and went to college in Seattle later that decade.

In those days I thought the Kalakala was as modern looking as the Seattle Center built for the Worlds Fair in '62. ;-)

I have a '62 Century 21 Worlds Fair postcard with the Kalakala in the foreground and the brand-new space needle in the background.

I remember being over the moon on hearing Elvis Presley was going to make a movie at the Seattle Center.

Somewhere in our clippings I have a souvenir of that filming, "It Happened at the World's Fair", which was one of the more awful, contrived of Presley's movies.

I currently help on the Kalakala! She is being re-painted on the outside and this winter the wheel deck will be complete along with the Double Horseshoe Cafe!!!