The Nefarious People Behind Occupy Anchorage and Occupy Wall Street 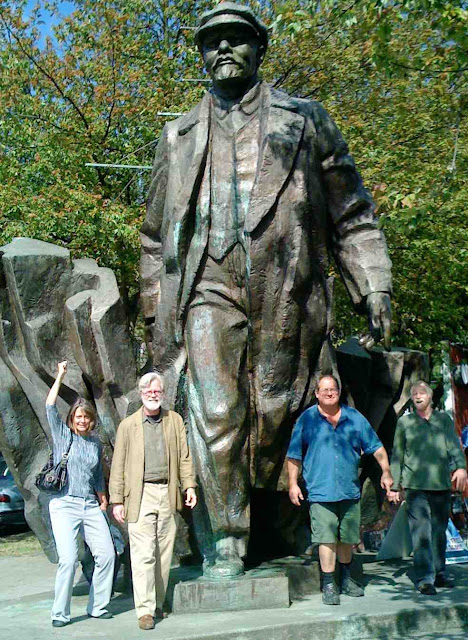 There they are.   I caught them on film.
Just as the savants in right-wing talk radio and paid pundits across the land are saying.  Coming straight at your house on Main Street from under their statue of George Soros.  Oh, wait - it's even worse!  That statue isn't of George Soros.


It's a statue of Vladimir Lenin!!
And the guy wearing Carhhart shorts (only a socialist would wear Carhhart shorts) brought that statue over from Europe and had it erected smack dab in the middle of Seattle's most recent capitalist success, Fremont.  And the guy on the far right sells products he invented that stop the bleeding in combat casualties, so they don't just fucking die on the battlefield, but weight our country down, supporting their disabilities for decades.  Talk about a commie plot.  And the guy who looks like a college professor speaks several dialects of Arabic.  And he travels to Arab countries all the time.  Hmmmm.  And the woman, their ringleader, urging them on?  Uh, oh - she's my wife.

The above makes as much sense as the bullshit the far right is putting out at the beginning of this week, as the Occupy Wall Street movement seems to possibly be moving into hundreds of cities, communities and areas.  The nutty right's main talking points, almost robotically enunciated over hundreds of AM radio stations centered around the term "53%," and the playing of a short sound bite by GOP presidential candidate, Herman Cain:


I don’t have facts to back this up, but I happen to believe that these demonstrations are planned and orchestrated to distract from the failed policies of the Obama administration. Don’t blame Wall Street. Don’t blame the big banks. If you don’t have a job, and you’re not rich, blame yourself! 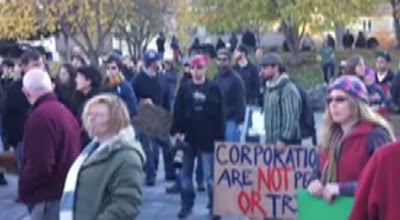 
Conservative activists have created a Tumblr called “We are the 53 percent” that’s meant to be a counterpunch to the viral “We are the 99 percent” site that’s become a prominent symbol for the Occupy Wall Street movement. The Tumblr is supposed to represent the 53 percent of Americans who pay federal income taxes, and its assumption is that the Wall Street protesters are part of the 46 percent of the country who don’t. “We are the 53 percent” was originally the brainchild of Erick Erickson, founder of RedState.org, who worked together with Josh Trevino, communications director for the right-leaning Texas Public Policy Foundation, and conservative filmmaker Mike Wilson to develop the concept, according to Trevino.

The overriding message is that the protesters have failed to take personal responsibility, blaming their economic troubles on others. “Suck it up you whiners. I am the 53 percent subsidizing you so you can hang out on Wall Street and complain,” writes Erickson, in the Tumblr’s inaugural post. “I don’t blame Wall Street because it doesn’t matter what Wall Street or anyone else does. I am responsible for my own destiny. I will succeed or fail because of me and me ALONE,” writes another contributor, who describes himself as a Marine Corps veteran. Another irate contributor writes: “I take risks so my kids can have a better life. Not so you can sit on your [expletive] at my expense.” 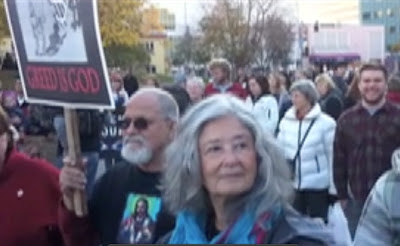 Driving around the Valley this afternoon, doing winter prep errands, I switched the iPhone from local AM talk radio to right-wing stations in Seattle, LA, NYC and Chicago that I've bookmarked.  They were all reading from the same prepared script. 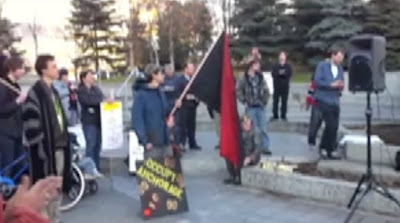 I listened to KFQD's Dave Steermanure browbeat an African-American veteran who was at Saturday's Occupy Anchorage event. Dave was complaining, almost yelling into the mike, that since the Obama White House is secretly running Occupy Wall Street out of some basement dirty tricks war room, the black veteran was consorting with segregationists back in the civil rights era.  I could hear the caller sort of chuckling at the failure of unSuper Dave's red herring rant to make enough sense to even pass his lapdog listeners' sniff test.

Dave's next caller ranted about how all the Occupy Anchorage people were plotting to get government grants for things they barely do, and get cushy jobs for their spouses, paid for by your tax dollars, and were gaming the system to obtain something for nothing.   Strange, sounds just like Joe Miller to me.  I didn't see Joe there Saturday. 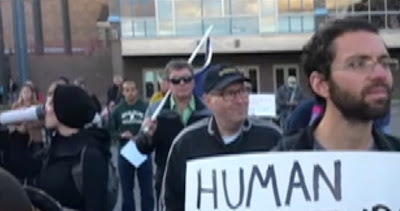 I've been following the Occupy Wall Street thing since its beginnings.  It would have been hard to miss - I'm a firebagger, writing for the blog firedoglake a few hundred times over the past three years or so.  Firedoglake is one of the best-connected outlets to civil disobedience campaigns around the US, and has reported extensively on the news of the various Arab revolts of 2010 and 2011.

Firedoglake was also among the first to notice how Democratic Party machine pols and career organizers attempted to co-opt the OWS message, beginning about two weeks ago.  That was when Judy and I began getting emails from Moveon.org, the DLC, DSCC and so on, trying to sound like they support the OWS aims (they do not) while asking us for $$$.  Even Obama 2012 tried the gimmick on us.  Go beg for your money from West Bank settlers, hedge fund billionaires, and drone aircraft manufacturers, Obama.  You've got their back, not mine. 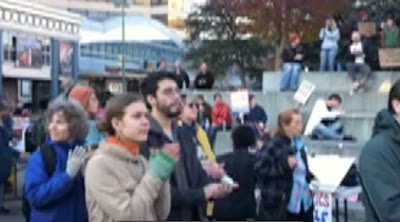 One illustration of how far out of whack the right-wing meme that OWS is being planned in the White House basement is, can be illustrated by the growing communication between the NYC OWS groups and 350.org, which has been demonstrating outside the White House for months.  Here's 350.0rg's founder, Bill McKibben at OWS NYC Washington Square Park summit gathering, on Sunday (NYC has banned megaphones and PA systems from the demonstrations):


Anyone believing this guy is being orchestrated by Obama needs some help.


Occupy Anchorage! - at The Mudflats


My earlier posts:  the Rant  and the Poll

A History of Occupy Wall Street

every great action starts small and undefined. then it grows and people wonder about it, even ridicule it. finally, it takes shape and grows with everyday people joining and the elite standing back and fearing it. read your history books-Americans don't take shit for too long before they rise up and demand their rights.

They say Occupy Wall Steet protestors have no direction and no point, the protestors are not being specific about what they are protesting about. Could it be there is too much rampant fraud and corruption in this country to pin point a few single points? My story reflects just how corrupt one bank loan could be in one small town in Alaska. Wall Street started the corruption and it spread like a virus to small towns clear to Alaska as proven and shown at my web site with link shown below. Let me be specific for you in my story on why I support the Occupy Wall Street Protest.