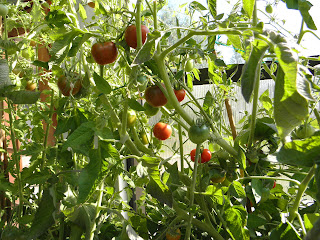 This morning broke out sunny, and got better.  I worked in the greenhouse and garden, before going to the memorial event in Anchorage for Alaska peace activist icon and savvy elder, Paul Prebys.   I was stirred by some of the surprising stories shared about Paul by his family, colleagues and friends. I imagine Paul is already organizing souls at his next destination, hoping to get them to help us out down here.  It was heartening to see the community hall at the Fairview Rec Center so full.

Above - ripening Stupice tomatoes.  60 tomatoes probably turned red or began that coloring today, in the sunshine and warmth of the greenhouse.  We probably have almost 1,000 tomatoes ripening - the best crop ever.

Below, a clump of Black Cherry tomatoes.  The first few I ate didn't seem to be very tasty, but they ripen into something more subtle and delicious.  I might enter some of these in the State Fair, as there are a lot of them, they are uniform in size, and look unique. 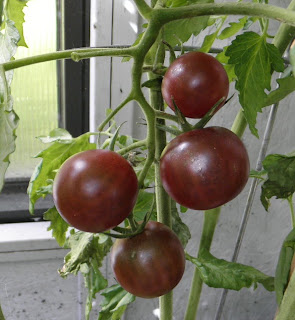 Slowly ripening Black from Tula tomatoes.  We will probably end up with about 70 of them.  They are very big, and are the most delicious tomato I've ever grown.  Here are images of fully ripened ones. 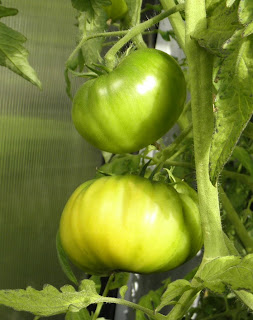 Green Zebra tomatoes.  Like Black from Tula, they ripen more slowly than Stupice or Black Cherry.  Green Zebra are supposed to be very tangy.  They were developed in the 1980s by Tom Wagner, a noted Washington state tomato cultivar and grower.  Unless more show up than we've yet seen, I won't be entering any of these at Palmer - we'll want to eat every one. 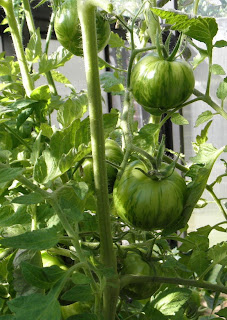 A huge zucchini, enjoying the sun.  Last year, it was so wet that most of our zucchini molded, at least partially.  This one probably weighs about three pounds.  Two are bigger (they were in shadows).  Alex once won 2nd prize at the State Fair for biggest yellow zucchini.  I think it weighed about 15 pounds. 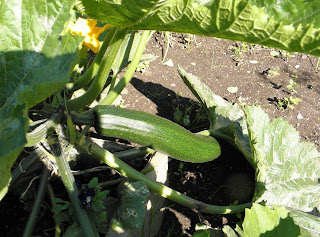 Corn stalks and cobs, with silks wafting in the sunshine and slight breeze. 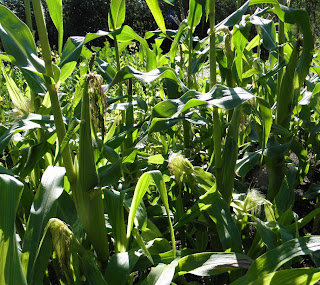 I picked these potatoes because their foliage was getting onto the driveway.  This was dug from about 26 inches of row.  This is looking like a bounty year for spuds. 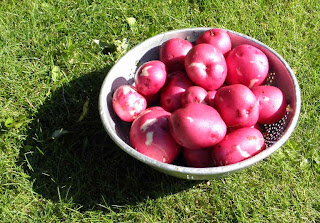 This red cabbage is getting to be almost five feet across the outer leaves.  The head looks to be about seven or eight pounds, and it is growing rapidly. 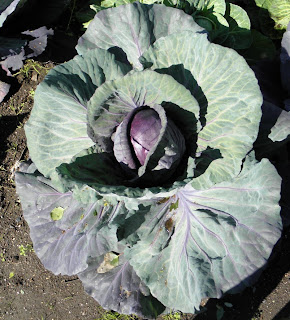 These might be hard to see.  Two beets, both looking to weigh at least two pounds.  The biggest beets I've ever grown are in this patch.  The beets are Chioggia. 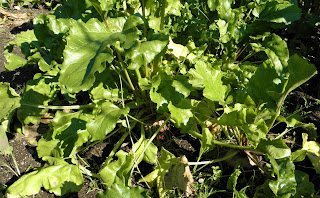 Wow them some petty spudz. Our local farmers market has been so full this year. I picked up some peas that are so crisp and juicy. Almost ate as much prepping for a casserole as i used.And the beets-to die for! Someday i will have time for my own garden.

Thanks! You may be the biggest fan of my garden pics.

I always look forward to your garden pics, Phil, and I used to love Linda's garden blogging, too.

Am also a big fan of your garden pics, Phil, but my enjoyment is always tinged with envy at the variety and quantity of what you grow in your patch of Alaska.
Am trying a new method for growing spuds here in my wet, rainy, wet ( did I mention wet? We are in week 2 of the usual August deluge ) patch of Southeast which shows great promise of increasing yield and reducing drainage problems. Am keeping my fingers crossed.

Also, have enjoyed greens since May 1 by adapting Eliot Coleman's winter garden ideas for starting them outside weeks ahead of norm. Have hopes of extending the season on this end too
But no way could I ever get the tomatoes, corn, even the big beets you do... dang.
Alaska Pi

What a beautiful garden.
How are your rows of carrots coming along?
Your beet picture inspired me to make a batch of roasted beet, carrot & red lentil salad. Yum

great photos! I followed your link to the pics of ripe Black from Tula tomatoes, and they look very similar to my favorite tomato Cherokee Purple. I will put those on my list for next year. thanks!

My sister made a similar salad when we were in Seattle at the beginning of the month. Yum!

The carrots are doing extremely well. Judy will be able to take lots of them out to Egegik, Tatitlik and other villages where she's working this school year.

I grew Cherokee Purple last year. They were tasty, but not very productive here.

Thanks for sharing the garden and mushroom pictures.