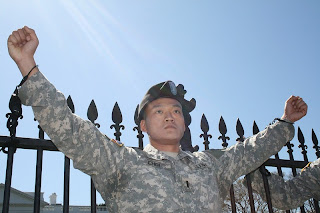 In a remarkable turn of events, the Department of Justice has elected to file a writ of mandamus to prevent Judge John Facciola from allowing Dan Choi to offer a “selective prosecution” or “vindictive prosecution” defense. The government elected to pursue federal charges against Choi and 12 others for chaining themselves to the White House fence on November 15, 2010 to protest Don’t Ask, Don’t Tell.

Judge Facciola said that as he listened to Choi’s testimony yesterday, it became clear that the government had treated him differently on November 15 when he chained himself to the White House fence, as opposed to how he was treated in March and April when he had done roughly the same thing.  But the Judge also found that there was a prima facie case for vindictive prosecution on the part of the government, saying that there was evidence it had been done to Choi because he was a member of a minority group and the government wanted to punish him for the message he was giving.  He strongly suggested that the actions of the government had been taken to abridge Choi’s first amendment speech in opposing Don’t Ask, Don’t Tell.

The judge has compared Choi’s case to the Supreme Court civil rights case Shuttlesworth v. Birmingham, in which traffic regulations were arbitrarily enforced in order to suppress the free speech of civil rights protesters.  The judge was insulted by the prosecutor’s decision to bring the writ of mandamus to the Court of Appeals, which is essentially a lawsuit alleging that Judge Facciola abused his discretion  in finding a prima facie showing of  vindictive or selective prosecution.

He asked her what her legal justification was for denying Choi his constitutionally protected right to offer his own defense.  George cited US v. Armstrong and US v. Washington, saying in both instances the court had found that such arguments should be offered in pre-trial rather than at trial.

The Judge countered that both of those trials had been jury trials, and that since this was a bench trial, no Appellate court would prohibit him from hearing evidence and conducting an investigation.  He also sternly warned George against filing a writ of mandamus and then attempting to dismiss the case thereafter in the event the writ was denied.  He suggested it would be further evidence that the government was persecuting Choi.

Earlier in the trial, Park Police witnesses admitted that the Secret Service had warned them in an email the day prior to the November 15 demonstration that Choi and others would chain themselves to the White House fence.  Further, the Department of the Interior submitted an elaborate memo to the Park Police 3 hours before the demonstration began advising them on filing federal charges against the DADT protesters, even though they are traditionally charged with municipal violations that are roughly the equivalent of a parking ticket.

But there had been no public announcement of the demonstration, so the defense filed a motion for the government to produce the Secret Service email and other documents about the government’s scheming to persecute Choi.  George protested vigorously that the information was not relevant to the case.  When Judge Facciola ruled in the defense’s favor, George asked for a delay while she conferred with her superiors at the Justice Department. Two hours later when the trial resumed, there were four Supervising Assistant U.S. Attorneys from the DOJ present when she announced her intention to file the writ of mandamus.

It is clear that there was elaborate coordination between federal agencies in order to single out Dan Choi and punish him.

George was unable to conceal her complete contempt for Dan Choi, Capt. Jim Petrangelo and others involved in the case.

The Judge finally had to order her to address both Choi and Petrangelo by their ranks after defense attorney Robert Feldman repeatedly objected when she called them “mister,” yet referred to the Park Police officers by rank.  The Judge asked her if she had an objection to addressing them by rank.  George replied that she did, but refused to say why.  The Judge said that one day he would be a retired judge, and that both he and she addressed retired judges as “judge.” He wanted to know what the difference was?  George answered by asking the Judge if he was ordering her to address them by their rank.  He said he would greatly appreciate if she would.  She addressed them by rank when she was in his presence, but when he was out of the courtroom, conspicuously addressed them as “Mister” again.

There was no better evidence of the government’s hostility toward the DADT protesters than George’s attitude toward Choi and Petrangelo, and her determination to prosecute the November 15 DADT protesters as vigorously as possible.

Defense Attorney Norman Kent said the decision to persecute Choi and others “may go all the way to the White House.”  It is clear that the government does not want an investigation into who was involved in making decisions that abuse the power of the state to punish and harass the President’s political enemies.

Judge Facciola gave George 10 days to submit her writ of mandamus.  After court adjourned, defense attorney Robert Feldman left court and Judge Facciola had him called back in, saying “I want this on the record.”  After Feldman returned, the Judge stood up, looked at both Feldman and Kent and said it was an “honor” to have presided over this case and hear their arguments.  He congratulated them both on their excellent performance.

Lt. Dan Choi saluted the judge and court was in recess.

Posted by Philip Munger at 2:54 PM

Did George get her law degree from Liberty University or Oral Roberts?

Good grief, her behavior and that of the DOJ is unconscionable. I would expected this kind of prosecution from the Bush-Cheney administration but not from President Obama's.

For what it's worth, I went to the whitehouse.gov and expressed my surprise and outrage that this is happening.

The article I read on HuffPo that prompted me to post my concern on whitehouse.gov said federal charges were only being applied to Choi.

Man, this is such a disappointment. I did not like the way this article ended because it seemed to imply the judge might feel as if he were going to be replaced on the case.

I just got ANOTHER letter from Obama, asking for more money. I've given him a lot in the past. So has my wife. That's why he or his people write so often, so fondly. Here's what I wrote back to the President:

Not ONE PENNY until then!