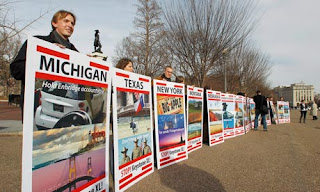 I.  More environmentalist activists were arrested outside the White House today, as the protests against the expected approval by the Obama administration of permitting of the Keystone XL tar sands oil pipeline continued and grew.  Unlike this past weekend's farcical overkill of imprisoning leading activists for days, the DC Park police, undoubtedly on new instructions from the White House, have decided to detain protesters only until they pay a fine or post bail.

On Friday, one could google "Keystone XL tar sands oil pipeline" and get almost nothing.  This evening that query gets stories from around the world.  The quantity of coverage is one thing, the quality, refreshingly, is quite another.  Here's the New Yorker's Elizabeth Kolbert:


Today is Day 4 of a “Stop the Pipeline” sit-in at the White House, and so far two hundred and twenty-two people have been arrested, including, just this morning, the actress Margot Kidder. The sit-in is being billed as “the biggest act of civil disobedience in the history of the climate movement.” In a phone interview from D.C., Bill McKibben, the moving force behind the protests (and a former staff writer for The New Yorker) described it as “very civil” disobedience.

“People are getting arrested for the not-very-profound crime of sitting in what’s called the postcard zone right in front of the White House,” McKibben explained. “People just go out there and sit down; the park policemen give them three warnings, and then start handcuffing them one after another.” McKibben himself was in the first group to be arrested, on Saturday. Apparently hoping to discourage the protest, the D.C. police kept the first group locked up for two nights in the city’s central cell block, an experience that, McKibben said, “is exactly as much fun as it sounds.”

Because the proposed pipeline would cross an international border, it requires approval from the White House. The project has been under review for more than two years now, and what to do about it seems to be a subject of considerable debate within the Administration.

II.  McKibbon thanked firedoglake (disclaimer - I frequently post there) for their support this evening:


I just wanted to offer my thanks to everyone in the FDL community who has been offering their support for these tarsandsaction.org protests in recent days. And I mean really offering their support–Jane was still liveblogging while she was being put in handcuffs, the purest example of journoactivism I’ve about ever witnessed. And scarecrowjohn entertained our cellblock with detailed instructions about how to post–hence this message.


The protests are going remarkably well–they’re being widely covered in the alternative press (lead story at HuffPo right now, Amy Goodman this morning, Keith Olbermann tonight) and edging their way into the already-nervous mainstream media. and we’ve got ten days to go–so, if you can join us, do, and if you can’t please spread the word.


At this point, and for the forseeable future, people aren’t going off to jail–they’re spending a few hours in the cell at the police station and paying a fine. But it’s still a big deal to get arrested.


If you’re looking for a way–and we all should be–to help celebrate the dedication of the new Martin Luther King monument, this is the way. Think of it as living history, a reminder that not all politics is electoral politics, and that it’s okay to go to Barack Obama’s house and tell him you want him doing what he said he would. Since the Congress plays no part in this decision, it’s one of the purest tests he’s ever faced. Our job is to make sure he has to face it head on.

III.  Here's Bill McKibben, being interviewed on Democracy Now this morning, by Amy Goodman.  She would have interviewed him yesterday, but he was still in jail at taping time:

Posted by Philip Munger at 7:41 PM