The New Trail to Gold Cord Lake at Hatcher Pass 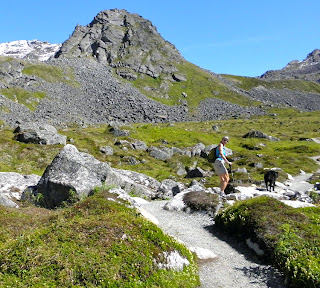 In 2007 through 2009, a new trail was built from the Independence Mine area at Hatcher Pass, up to Gold Cord Lake.   The old trail went directly up a rock fall that adorned the creek that drains the lake.  It was fairly vertical, with a moderate amount of exposure, especially considering how many families took little kids up the path, because the hike is short and quite convenient.

The new trail is almost twice a long as the old direct route.  It is far safer for families with little kids, though.  Judy, Strider and I hiked it today. 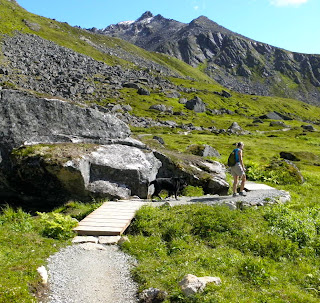 Judy hikes a lot more than me, and has done the new route before.  It was my first time up the new trail.  Some of the new rock stairs are quite pretty, the way they seem to highlight the other native rocks around them. 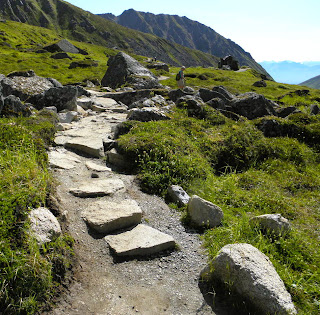 The park people have erected some barriers, to keep people off the old trails, some of which are being replanted with local flora. 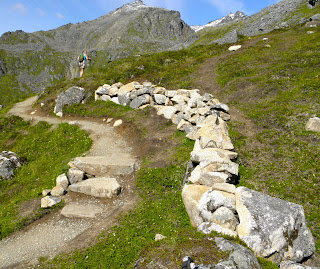 This set of stairs had several rocks that must weigh over 500 pounds. 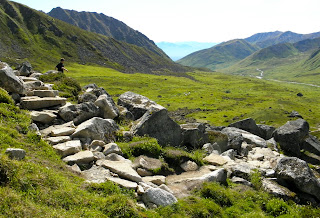 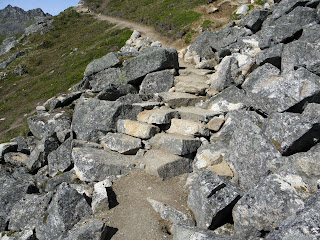 Part of a series of staircases. 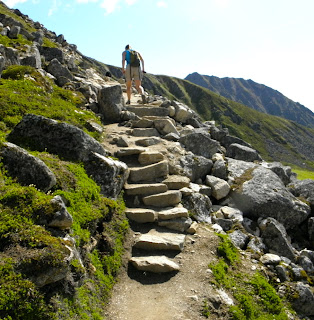 The top of the new trail, as it converges with the old one, just to the west of the lake. 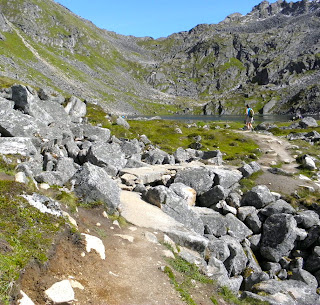 Overlooking the western edge of Gold Cord Lake, looking down on Independence Mine valley, the peaks around the summit of Hatcher Pass, and a bit of the lower Knik River basin in the background.  I counted 52 people up at the lake, by far the most people I've ever seen there. 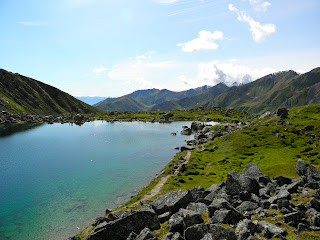 The southwest corner of the lake, with its shades of blue, green, azure and aquamarine. 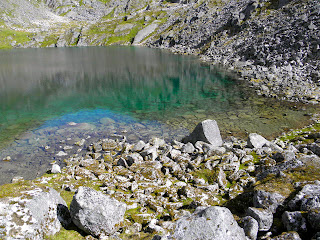 OK, you have moved me. Time for a trip up to Anchorage. Oh well, I have to go anyway to buy school clothes. But, this is a reason to go! I hate the 5th ave. mall.

Take your family your wife will love you for it.

Even conservatives will enjoy.

"Even conservatives will enjoy."

I think so. Healthy conservatives and healthy liberals.

Of the 50+ people we saw up at the lake Friday, almost all were fit. No obese kids at all. Pretty much the opposite of the Wasilla Wal Mart where I had to go three weeks ago. I counted a lot of obese and very obese kids there - probably a bit over half of them. Several with their hands gripping some huge corn sugar-based snack or another...

Phil, Thanks for the pictures. We hiked up there in July 2009, after visiting Independence Mine, so I guess it was mostly done then.

This summer we saw that the first quarter mile or so of the Gold Mint trail had been redone. But what about Reed Lakes trail? That one was really nasty, especially when it was wet. But the area is incredibly beautiful.

Judy says there is work being done on Reed Lakes, with more planned and scheduled. There are some really funky sections on that trail. Both Judy and I have been injured on the Reed Lake Trail.