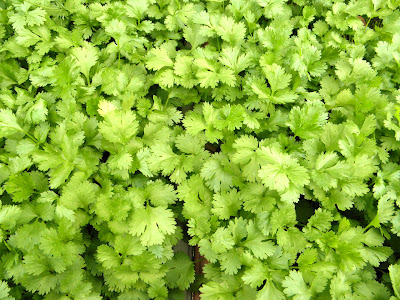 For once, we've been presented with an embarrassment of cilantro.  It doesn't happen very often to Alaska gardeners.  The batch seeded in late June turned out so splendid that we want to use every leaf petal.

Should I turn it into a pasta ingredient?  Directly, as part of the pasta dough, or indirectly?

The mating of cilantro with pistachio kernels is a natural match, but few people get the nuts, unless they are still in the shell.  A pound bag of the shelled nuts costs less than $20.00 at some large volume stores.

The first time I bought a bag, it was because I wanted to eat a bunch of them without the time and hassle of tweaking them out of their little houses.

I discovered that I missed the obsessive moves one makes going after the kernels, taking five or ten out of a bag at a time, and then finding a place to put the empty shells, as I chomped on the little kernels. 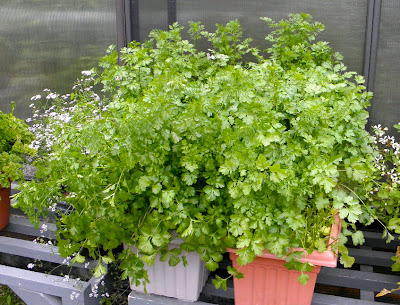 Realizing we'd have a huge burst of cilantro in late summer, I got a new pistachio bag last month.  Now it is time to finally make cilantro-pistachio pesto.

If you've made basic basil-pine nut pesto, you probably know that it tastes far better homemade than anything store bought.  This is more important with cilantro-pistachio pesto, because lemon or lime juice is a component of many recipes. In some, the rind is also important.  There's no way to substitute the freshness of newly squeezed and shredded citrus to anything available in a store.

We put up a lot of basil pesto as an uncooked freezer product.  It stores well for several years.  Cilantro-pistachio pesto might be more problematic.  I'm putting five batches in the freezer, so I can see.  But on my wife's advice, we won't add the lemon until it has thawed for use. 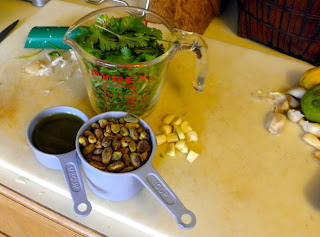 Cut the garlic cloves into quarters or smaller.  Shred the rind of the lemon, then juice the fruit.  The cilantro leaves can include upper fresh stem material, if it is choice.  It adds fiber to the product. Compact the leaves a bit firmly to get your 2 cups worth.  Blend briefly, then push side debris in the blender down into the mix.  Blend again, and spoon into whatever destination you've chosen for this ambrosia.

Like other pestos, this one can be used in many ways:


alone, on freshly cooked pasta
as a coating to a baked dish - added late in the cooking
as part of a vinaigrette
with mayonnaise added, as a garnish to spread 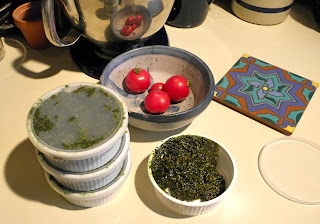 We served our experimental batch on Friday, mixed in with Bulgar wheat.  Yum.  It was far less weighty than if we'd had it with pasta.

No salt is necessary in this pesto, because the pistachio nuts have already been salted rather fully.

There are variations to this recipe.  Some include lime as a lemon substitute.  I can imagine tangerine.  Others toss in some pepper or another.

Basil pesto is invariably linked to shredded cheese like Parmesan.  Cilantro pesto does not beg for cheese.  We haven't used any with it yet.  What do you think?
Posted by Philip Munger at 10:25 PM

I use my freezer for canning all the time and if I might suggest - only freeze the leaf, nut and oil - leave the addition of the garlic, citrus juice and rind for when you're actually ready to use the pesto. Often, after only a couple of months, the rind will be gritty and the juice (when mixed with other ingredients) can actually taste stale or acrid.

I make fresh sorbet from containers of mashed seasonal fruits like mango and strawberry - only adding the orange juice, rind and egg whites when preparing to serve - and it always tastes like the fruit was just picked.

I also freeze separate lots of freshly-squeezed orange, lemon and lime juice in ice cube trays to have on hand for soups and sauces - but the rind changes texture so I either get fresh or do without.

Your pesto recipes look wonderful - thanks so much for sharing them :)