Where are the other Alaska bloggers on this vitally important issue?  A couple of them are still writing about Palin's last pregnancy, unless you're on the side that it was NOT her last pregnancy.

This is, after all, an issue with implications for the entire planet.  As 350.org's founder, Bill McKibben has stated:


Keystone XL—[is] the new, 1,700-mile-long pipeline we're trying to block that will vastly increase the flow of "dirty" tar sands oil from Alberta, Canada, to the Gulf of Mexico—[has become] a national issue. A few months ago, it was mainly people along the route of the prospective pipeline who were organizing against it. (And with good reason: Tar sands mining has already wrecked huge swaths of native land in Alberta and endangers farms, wild areas, and aquifers all along its prospective route.)

Now, however, people are coming to understand—as we hoped our demonstrations would highlight—that it poses a danger to the whole planet as well. After all, it's the earth's second-largest pool of carbon, and hence the second-largest potential source of global warming gases after the oil fields of Saudi Arabia. We've already plumbed those Saudi deserts. Now the question is: Will we do the same to the boreal forests of Canada? As NASA climatologist James Hansen has made all too clear, if we do so it's "essentially game over for the climate." That message is getting through. Witness the incredibly strong New York Times editorial opposing the building of the pipeline that I was handed on our release from jail.

Meanwhile, today, as the number of arrested environmental activists passes the 700 mark, some are now being organized at Catholic churches.  Nebraska Governor Dave Heineman has written to Obama, requesting the pipeline permit be denied.

Supposedly, the president is being kept in the dark by his staff about the very existence of thousands of activists, most of whom voted for him in 2008, being hustled off in paddy wagons, just beyond his front yard: 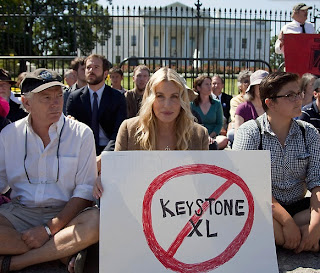 It isn't just the other Alaska bloggers that have been ignoring the most important environmental action outside the White House in a generation or more, it is the entire Alaska media. One might think that the fact TransCanada is the major partner in the pipeline project might have gotten some media outlet or blog here to take the hook, eh?

And it isn't just Alaska where this story has largely been ignored.  Apparently one of the few towns featruring a number of stories on this issue has been Calgary, where the project is headquartered.

Does anyone know of any Alaskans who have been participating in these demonstrations?

In the meantime, you can call or write to the President, asking him to not sign the pipeline permit.

Maybe Gryph or AKM will post the link to the letter-writing drive.
Posted by Philip Munger at 11:52 AM