In Preemptive Defense of Shannyn Moore 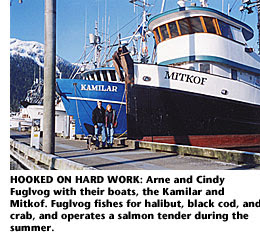 I was told that Arnie Fuglvold was under possible investigation on the evening of Friday December 5th, 2008.  I was in the F Street Station, meeting three other people, two of whom are among the most knowledgeable there are about North Pacific fishery issues.

I was asked not to write or talk about what I was told.  I agreed.

I was told other things at that meeting about Arnie and about some of the other fishermen who were then considered to be both at the top echelon of Alaska highlining fishers, and future political prospects.

The last time I remember talking about Arnie's case was in June 2009.  After that, the issue sort of left my screen, as I figured his case had been passed over, or someone had intervened to end any investigation.

I have no doubt that what Shannyn Moore has revealed this week on her radio show and through her interview on this case, and her efforts to get the facts out on this is true.  She should be credited for her discretion and persistence.

She should probably also be credited with the way the Anchorage media is - at least so far - pursuing Sen. Murkowski for an honest answer on, as the Alaska Dispatch wrote Wednesday, "Who knew what and when."

Moore also raises questions about how the State of Alaska handled their pursuit of Fuglvold's criminal activity that should be pursued by Alaska's flagship media outlets.  She claimed on her radio show Wednesday that the case files on this went inactive when the investigator initially assigned to look into this and other violations by the Petersburg fisher was reassigned to another job.  When was that?  Who were the troopers?  Why did the reassignment happen when it did?

The North Pacific Fisheries Management Council has always been a corrupt body.  It always will be, the way it is set up to operate, promoting people like Arnie and worse.  It is designed to carefully - yet carelessly - loot our seas of our kids' future employment out there as fishers, so that foreign companies can take their money out of our state, out of our country.  Politicians like Lisa and Mark are rewarded amply for fucking us over, through the policies of this terribly iniquitous managing body.
Posted by Philip Munger at 10:46 PM

Shannyn's show today, August 3rd, was one for the books.

Wow - you can cite a date, location, & approximate time for an event that occurred more than two & half years ago. Make someone wonder...

Shannyn's credibility would be better if she hadn't gone on the national media promoting the story that Sarah Palin was under federal investigation, forcing the FBI/DOJ into the unprecedented statement that Palin was not.

"Politicians like Lisa and Mark are rewarded amply for fucking us over, through the policies of this terribly iniquitous managing body."

Hey ANON 7:55am:
SHUT THE FUCK UP mt_spurr!
Palin god damn afuckingpologist.
FUCK YOU!
Shannyn NEVER said Palin was UNDER investigation. Shannyn said "RUMORS WERE SWIRLING" How else to make sense of her abrupt resignation AT THE TIME?

Give me a time and place motherfucker. I will beat the living DOG SHIT OUT OF YOU!

I remember the date, time, place, issues and people because the meeting was important, I took notes, and there's my handy email string.

Palin apologist, I think not. Ooh, u mad?

How Alaskan of you, resolve differences of opinion with your fists and obscenities.

Actually, the cached version at FDL read like this, note the time is EST, which is 11:36 AM AST on a Saturday. That evening on KUDO Moore, Devon and Beagle had to be corrected on air as the FBI issued their statement that evening.

It does tarnish your credibility/believability.

Update: This just in my inbox, from a source connected sometimes to CNN:

“Here’s a quote I got from law enforcement here in Alaska yesterday afternoon regarding Palin “a criminal indictment is pending authorization.”

This is what is hinky:

HOWEVER, on the same day Moore outs herself (if that is to be believed) and the following day the Anchorage Daily News names Shannyn Moore as the POSSIBLE source of the Fuglvog tip.

None of this adds up, including the convenient, oh, I keep a daily log of my street-side conversations, and match them up with my email, but forget to mention them in my blog when launching a defense for Shannyn Moore who had not been attacked.

And for the record, let it be shown the Anchorage Daily News did not attack her credibility, but Mr. Munger, somehow, somewhere in the depths of the Alaska news media, sensed that someone would remember something and thought Ms. Moore should be protected from some hostile media personality or personage that never appeared - which is very much like Sarah Palin.

I've written about what happened on July 3rd here and elsewhere. I'm not about to go through that again now, especially in reply to an anonymous comment.

Have a nice day, whoever you are.