Fukushima Radiation Spreads Worldwide and Into Japanese Ground Water - Canada to Begin Intensive Testing of Salmon & Caribou - When Will Alaska & U.S. Do the Same? 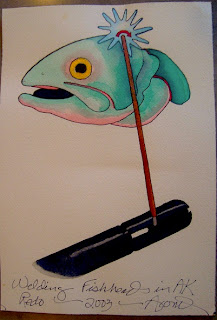 
The Canadian Food Inspection Agency plans to start testing fish off the coast of British Columbia for the presence of radiation stemming from the Fukushima nuclear disaster in Japan earlier this year.

The agency has not yet released any specific details on the testing program, but did say it expects the test results to be well below Health Canada's actionable levels for radiation.

Fisheries activist Alexandra Morton with the Raincoast Research Society says she supports the testing, but calls the announcement a political move. Morton says millions of sockeye have started returning to the Fraser River and the fishing season is already well underway.

Salmon are a particular concern to Morton and others because their wide-ranging migration patterns can take them right across the Pacific Ocean to the coast of Japan.

British Columbia fisheries activists are concerned that the timing of the announcment is a political ploy to draw attention away from the beginning of hearings into the cause of the Fraser River Sockeye salmon run crash:


"If they were actually concerned about the health of people and the fish, they would have started this actually at the beginning of the commercial openings. But to release this two days before the disease hearings at the Cohen inquiry, to me it's a political statement, it's a political effort to appear responsible," [Morton] said.

The Cohen Commission hearings into the collapse of the 2009 Fraser River sockeye salmon run resumed in Vancouver earlier this week.

Morton also wants the CFIA to test farmed salmon, because she says trace amounts of radiation were detected in seaweed on the B.C. coast.

The Cohen Inquiry may be of interest to Alaskans. It is investigating more than one hypothesis about why the Fraser River Sockeye run collapsed rapidly, beginning in 1993, through 2009.  Alexandra Morton writes:


The Cohen Inquiry began in October 2010 to investigate why the Fraser sockeye have been in decline for the last 18 years. It invited groups to apply for participation status at the hearings, and each of the 19 accepted coalitions has a team of lawyers. The coalitions include the Government of Canada, the province of B.C., several First Nations groups, commercial fishing organizations, a Conservation Coalition, the B.C. Salmon Farmers, and the Aquaculture Coalition, which I am part of. Justice Bruce Cohen heads the process, and requested that information regarding the Fraser sockeye be entered into a database that only participants have access to.

Many suspect disease-causing elements have been introduced into these salmon from B.C. salmon farms.  Recently, a prominent scientist, Dr. Kristi Miller, has been ordered to not discuss or write about her findings.  She will testify to the Cohen Inquiry on Wednesday:


Fisheries and Oceans scientist Kristi Miller is slated to testify about her studies suggesting some sort of virus may be killing salmon before they reach the spawning grounds.

Miller's long-awaited testimony is expected to be controversial, following allegations the federal government attempted to prevent her from discussing her work with the media.

The inquiry will also hear about fish farms and their impact on wild salmon, including testimony from outspoken fish farm opponent Alexandra Morton of the Raincoast Research Society.

"As these hearings proceed it will be a detective effort. The best fit answer is going to have to explain an 18-year decline of only the sockeye that migrate along eastern Vancouver Island, while other neighbouring runs were unaffected, even increasing," said Morton in a statement issued on Friday.

We can be very thankful Alaskans don't have to put up with a powerful salmon farming industry here.  Just as many Alaskans and other environmental activists feel Shell Oil Company may be behind the outrageous ongoing efforts to discredit Dr. Charles Monnett, so it appears the giant B.C. fish farming businesses may have a hand in the harrassment of Dr. Miller.  Today it was reported that her laboratory's funding has been cut:


Kristi Miller, a geneticist who was silenced by the federal government's Privy Council Office in January, will finally be permitted to speak this week at the inquiry looking into the decline of Fraser River salmon.

She is due to testify at the Cohen Commission on Wednesday about her team's ominous discovery that viral pathogens may be weakening the fish. Federal documents indicate she might also have plenty to say about the health of her lab at the Pacific Biological Station in Nanaimo on Vancouver Island.

The lab's current "funding model," which has been paying many technical staff, has been found to be "non-compliant with DFO policy," Ruth Withler, a senior scientist in the lab wrote in a Jan. 13 message to staff in the Department of Fisheries and Oceans.

The document, released under access to information laws, says the decision to change the funding model could be "jeopardizing future involvement of DFO science staff" in the type of "innovative research" done in Miller's lab.

Miller is head of the Molecular Genetics Laboratory, based in Nanaimo, and Withler helped pioneer the genetic tests used there.

Miller and Withler were not allowed to give interviews to discuss the funding problem, and DFO's media office responded to questions with a terse written statement.

The office said a Treasury Board directive from late 2009 indicates that outside funds, or "special purpose money," must not be used to pay the salaries of government employees.

About half the lab's 19 highly technical staff have been paid for years using external funds. DFO's media office says between $600,000 to $800,000 a year of outside money has been used to pay the salaries of eight to 11 of the lab's staff, depending on the year.

Back to the pending testing for signs of radiation:


"The monitoring of fish off the coast of B.C. is part of a series of measures intended to monitor the impact, if any, of the nuclear crisis in Japan," Alice D'Anjou, a spokeswoman for the CFIA, told Postmedia News in an email. The agency does not expect to find harmful levels of radiation in the fish, D'Anjou said.

"If it's sockeye (salmon), then it's a wise precaution," said fisheries oceanographer Tony Pitcher from the University of British Columbia. Sockeye salmon migrate quite far north and west in the Pacific Ocean into waters that are also crossed by currents coming from Japan, Pitcher said, so there is a chance the salmon will come into contact with organisms carrying some radiation.

Whether the salmon are affected by the radiation depends on what the salmon eat, Pitcher said, and also on the half-life of the particular radioactive isotope that entered the food chain from the reactor.

The Yukon government is also concerned:


Meanwhile, Yukon's Department of Health also plans to test the Porcupine caribou herd for radiation from the reactor meltdown.

"There is no reason to believe any significant contamination from radiation has occurred," said Brendan Hanley, chief medical officer of health for the territory, in a statement released Thursday. "We just want to reaffirm that the caribou are safe to eat."

According to the Porcupine Caribou Management Board, Porcupine caribou are hunted mostly by Gwich'in, Northern Tutchone, Han, Inuvialuit and Inupiat peoples in Yukon, the Northwest Territories and Alaska. The meat is a staple food and the hide is used to make clothing such as mukluks and parkas.

The herd has been monitored on an ongoing basis for 15 years for other contaminants.

As this herd migrates between Alaska and Canada, this appears to be the first extensive Fukushima  radiation testing effort that might have a direct impact upon Alaska.

Thinking about the known muzzling, intentional discrediting and defunding of scientists such as Dr. Charles Monnett, Dr. Kristi Miller or Prof. Rick Steiner, either in the USA or in Canada, it is easy to conclude that such actions, like those against whistleblowers, are accelerating.  Rapidly.

II.  Here's Arne Gundersen's most recent update on the spread of contamination from the Fukushima disaster:

I'll bet the U.S. is already checking this - they've just not shared the info with us.

I'm sure you are right. At what point the information gets shared, we shall see.

Our military has 65 years experience monitoring even minute amounts of radiation over wide areas in real time. The civilian radiation monitoring network was largely dismantled after the downfall of the USSR. Nothing to take its place is in existence.

Thank you Phil!
Fukashima is my ONLY CONCERN these days and I'm so glad to see you've done a FEW POSTS ON IT recently!!
Spreading this one around too PRONTO!

Right On Phil!
Something is fishy alright and it is not the Salmon!
Please keep posting and asking questions;
Alaska and Canada need all the help they can get!

We are being polluted, and that is a crime!
Low, Low, Low amounts don't make it right!

I forgot, lots more here:
http://www.huffingtonpost.com/2011/08/19/japan-earthquake-tsunami-warning-_n_931417.html
or search huffingtonpost for Japanese reactor pollution.
+
Your readers might like some of these links:
http://ex-skf.blogsp­ot.com/