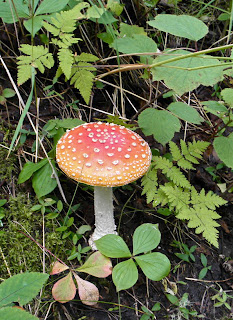 Last year was one of the best southcentral Alaska mushroom seasons in a long time.  This year, it is starting a bit late, as it is fairly warm yet at night.  Above, the dreaded and worshipped Amanita Muscaria. I don't harvest them, but they make for great photos.

Below, nestled under Dwarf dogwood, is a fungus I've never seen before.  Can anyone identify it? 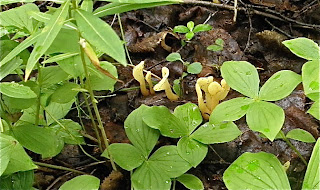 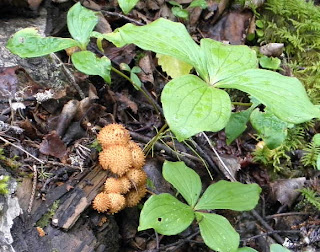 A big Birch boletus.  They are edible, but they turn a purplish black when cut or cooked, which is a bother. 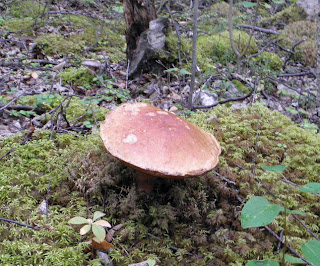 The goal - Boletus edulis.  I found three in good condition.  There will be more this coming week.  The three became part of an omelette this morning. Another fungus I have never seen.  The picture's detail came out well, so - once again - anyone know what it is? 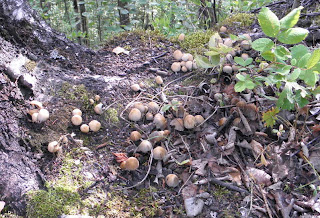 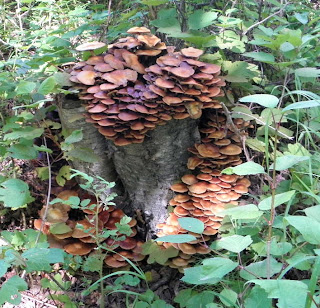 Posted by Philip Munger at 9:00 PM

Wish i could identify for you,alas i am but a novice of thirty years. I did walk with Boyd Shaffer once and he thought most any mushroom you find up here can be eaten should you par-boil it first and throw out the water. Alder buds make a flour when ground!

The yellow one looks a tiny bit like a just getting going coral fungus but have no idea what it is really.
http://www.ontariowildflower.com/fungi.htm#coral
cool pics! thanks!
Alaska Pi

Oh? Perhaps you simply misunderstood the example of how Mr Shaffer sought to let you and others (if you were with a group) of the folly of how some known mushroom hunters poisoned their families and themselves...

Thus have made light of the seriousness of his caliber and level of knowledge, learning, and actual teaching abilities over the half century of his Alaskan experience.

{A Homer hippie? Let's see what credentials of incredulity that connotation brings with it!}

Had one actually walked with Boyd Shaffer (Sr) into the forests of south central Alaska, or up along the Denali Highway, or the Seward Peninsula (Nome/Teller, etc) or out along the Alaska-Canada Highway, or from AK to Belize, along the roadways when he drive there, the factual and referenced college instructor's very real and true statements about the flora and fauna, and their ecological interactions, would all be known first hand. You could then write a book.

Since all we have here, in an post on this topic is a questionable remark; perhaps out of context, and more likely in jest (re: Yule Gibbons, who did think thus; and died?)
with only one side represented here.

The authenticity of here-say flies in the face
of good knowledge and a superior skillset of a learned person who had fine wit, wisdom and by no means ever talked down to anyone with a sincere interest in factual learning. And nobody who actually participated in a field study of mushroom identification at the Kenai College died from or was sick; due to the exact opposite in how he taught people to not even put suspicious mushrooms into the same basket with known good ones. The four or five excellent ones even a fool could probably locate.

If you had a personal issue, that time has passed to 'get even' or disparage a good person, a credit to the community since 1960.