Drag and variety show nets $3,170 toward an Alaska vet’s home 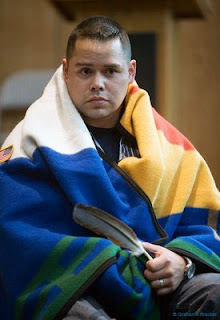 A fundraiser comprising drag queens and LGBT youth at Mad Myrna’s in Anchorage on Saturday night netted over $3K+ for a severely wounded Alaska veteran to help build him a handi-capable/handi-accessible home.

Event organizer Caleb Pritt was pleased with the result.

“I am simply overwhelmed with the generosity and compassion so many showed last night,” said Pritt.

“Too often, in society we see the military and veterans on one side of the political spectrum while on the other you have female impersonators and LGBT youth and activists. This is encouraging to me to see these two communities come together and raise money for a worthy cause.”

Pritt, who is also one of the performers and is known on stage as Diedra Windsor Walker, singlehandedly collected, over $2.5K in auction items from Alaska businesses. However, one of the biggest money making events of the evening is when local Alaska radio/television personality and professional auctioneer Cary Carrigan was auctioned off to be dressed in drag and perform a number. Pritt estimates Carrigan’s performance raised a sizable amount of the money raised.

“I am so thankful to Jeff Wood and the entire staff of Mad Myrna’s, the members of the Imperial Court of All Alaska who assisted in this effort, Grant Aviation, Village Inn, and so many more businesses and individuals who gave of their time, their talents, their auction items and raised money for a great cause,” said Pritt. “A group of drag queens and LGBT Youth raising money for a severely wounded veteran is something even Hollywood wouldn’t think up, but it shows how united Alaskans can be in a good cause. I hope our example spreads across this country and is a way to unite, rather than divide communities.”

Pritt said he hopes to make this an annual event.

[Judy and I were there and had as much fun at Mad Myrna's as we've had anywhere all summer!]
Posted by Philip Munger at 12:34 PM

I've got a couple of pics of you, Phil. This really was a wonderful event, and we had a great time, too. Good job, Caleb.

andrew pritt is a scam artist. He scammed his way across arkansas and it looks like he made his way up to Alaska. Be glad you are rid of him, no good comes from him.