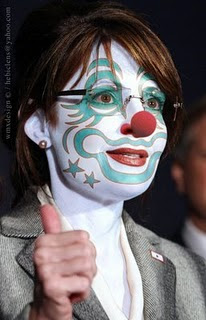 The blog Electric Outlet has managed to get a list of the 14 people who were listed last week May as administrators at Sarah Palin's facebook empire. Here they are:

As is noted at Electric Outlet, some are real, some are fake. For sure, Mansour, Frye and Palin spend time on the account. How many of the others?

ROFLMAO, shes tweeting and commenting on herself!

Btw, the RW PA 'newspaper' with the article about kids cookies....they retracted it.

another murdochian 'news outlet' strikes out.

This is the article to read (by Will Bunch) on Philly.com re: Palin's talk at the private Christian school

How many Palin fans does it take to change a lightbulb?

Do they bother when the bulb doesn't have to be bright?

Palin fans have no light bulbs to change. Their lights are out.

You are giving her ideas! Next she will tweet/facebook post the horror of the eco twisty bulbs! (just wait!)

AFAIK NONE of those are Fake. I've checked most of the ones other than Frye, Mansour and Palin- and everyone a winger. Many interesting connections to follow up. Such as People Mag at the Beehive a few weeks ago (for the People Mag shoot?). Many other once or twice removed interesting connections. Screengrabs=scrubbing fail. This link at Electric Outlet appears to be a post from May of 2010.

I knew a Sicliano once that worked in press for Congressman Don Young?

It will be interesting to cross reference this list at Electric Outlet with the statements of Mansour in response to Jay Ramras' request for disclosure of those behind c4p. IIRC it was at c4p and went something like 'We are not in the shadows- Jay we are in your face. We are ordinary barbarians here. No one controls us. We are a horde.'

Is it possible a self described horde of barbarians is in charge of Palin's facebook page?

Jackie Siciliano is a Team Sarah person and is jackiesic on twitter. She has a Team Sarah facebook page with a DWTS post asking for votes for Bristol. She has sarahpalinblog and of course there is a disclaimer that it is not affliated with Palin,SarahPac, blah, blah, blah, lie, lie, lie.

Here is a story about Jackie Stamper Siciliano attending an award ceremony for the Susan B Anthony List. Keynote Speaker Sarah Palin.

"Prior to the breakfast and speech, Jackie attended a private reception at which time she met with Sarah Palin. “Sarah thanked me for my work at Team Sarah and sincerely expressed her appreciation for the work I’ve done on her behalf.”

Some other details about the founding of Team Sarah.

The picture that Siciliano uses sometimes as an avatar is a cropped version of the picture used in this newspaper story.

4:58 am- Any more details about any Siciliano/Alaska Congressional connection?

The link for 4:37 Pm comment Jackie Siciliano and Sarah Palin together.
http://www.salyersvilleindependent.com/node/1135

>> I knew a Sicliano once that worked in press for Congressman Don Young?

Any details on this?

If anyone is checking back here are a few links.


"Alaska Native corporations and others formed the Native American Contractors Association in 2003 to represent their interests. NACA filed papers with Congress in February, about two weeks before the Government Reform chairman announced its investigation, indicating that it had hired the lobbying firm of PodestaMattoon in Washington. An accompanying report said the group’s principal lobbyist in 2004 was Jennifer Siciliano. Siciliano previously worked as a spokeswoman for both Stevens and Rep. Don Young, R-Alaska."

Or check into Hamilton Place Strategies.

Or check these links out.
http://blog.washingtonpost.com/spy-talk/2010/07/dana_perino_lobbying_for_aviat.html

"Perino has just signed on as a lobbyist for Red Star Enterprises and Mina Corp., two closely related companies who hold classified, sole-source, $1.4 billion contracts with the Defense Department to supply aviation fuel to the Manas base in Kyrgyzstan and the Bagram airbase in Afghanistan....Congressional investigators are exploring whether Mina Corp.’s business dealings with the ruling families in the last two U.S.-backed governments in Kyrgyzstan played a role in triggering popular uprisings against corruption.....Perino and Hamiliton Place declined to comment for this story"

At the eurasianet link
"Other HPS principals include Stuart Siciliano and Taylor Griffin, both of whom have solid Republican Party credentials."
...
"Griffin, meanwhile, worked on the 2000 and 2004 Bush-Cheney election campaigns. In 2008, he “served as a senior communications advisor to the McCain presidential campaign.” In that capacity, he headed vice presidential nominee Sarah Palin’s rapid-response team. He joined HPS in February."

I don't know if my comment is awaiting approval or lost.
It was rather long.
This time just the links.
Here are some links about Siciliano.
Jennifer (Wise) Siciliano former staffer for both Don Young and Ted Stevens.
http://www.kodiakdailymirror.com/?pid=19&id=1404

Led crisis communications team in Alaska focused on the “Troopergate” investigation and Governor Sarah Palin’s record. Served as spokesman for economic and policy issues prior to working on Palin account."