Looking for Lisa Murkowski Signs in the Valley 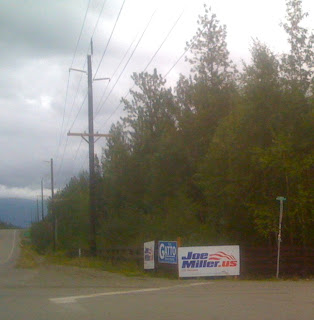 I just returned from a chore run to Lowe's in Wasilla. I decided to count Lisa Murkowski vs. Joe Miller signs.

Here's Valley GOP stalwart (and friend) John Klapperich's fence. He's got three of the 21 signs. John owns KENI KBYR and KMBQ radio station, and has been President of the Board of Directors of the Wasilla Chamber of Commerce. Perhaps more importantly, the Miller signs on John's fence are right where the Murkowski signs were six years ago.
Posted by Philip Munger at 7:17 PM

This is very encouraging. I live on the Hillside in Anchorage and there are more Miller signs here too. If enough Dems vote for Miller, we could topple Lisa. If you are planning on asking for the Republican ballot, remember to change your party affiliation to Non Partisan, Undeclared or Republican (what else, Independant?) in the next couple of days!

Opportunities like this don't come around that often. Think strategy! bt

Ya know, I'm sorta against Miller because SP supports him. Kinda sad, but true....

Anonymous @ 9:48. . . my sentiments exactly. I don't know that I would support Joe if I WANTED to BECAUSE she supports him and really thinks that her endorsement will sway the sheep.

Could SP be in cahoots with Lisa in endorsing Joe?

re-register as a republican... i don't think i could do it, even for a subversive cause.

It just shows how dumb most of the Valley people are for listening to TP and S. Murkowski is the better candidate, but hey if TP & S say Miller then it's Miller. If all of a sudden they switch to support Murk then their flock will follow.

No way would I ever run the risk of Miller getting elected...wants to eliminate public schools, social security, medicare? Come on.

Similar numbers here in Fairbanks. I've seen one Murkowski sign and countless Miller signs. I think it would be a problem if he wins the primary - it puts wind in the tea party sails, and, you know, he *could* win the general election, which would be a disaster.

If Joe wins it would put wind in TP & S's sails (not just the TeaParty) and they could get mo' money. I am not interested in that. No way, Jose!

No, I won't do this. We don't like it when Republicans crash our primaries; I won't do it to them.

Of course there are more signs for Miller in Wasilla. The Wasilla Chamber of Commerice is staffed and run by a bunch of Palinbots. Wasilla is the Alaska Tea Party capital. Everytime I have to go to the valley I feel like I need to have a bottle of pepto nearby - the bumber stickers, attitudes and ignorance displayed by these idiots turns my stomach.

Phil- is there generally a correlation with names on signs and election outcome in the Valley?
Or do the same few people do signs no matter what ?
alaskapi


The important point is that where there were Murkowski signs 6 years ago, there are now Miller signs.

Come November most of the Miller signs will be replaced with Murkowski signs.

A bunch of pro life conservatives are voting their conscious in the primary. Come November the Republicans will be a big happy family.

Lisa seems to have survived the "Daddy's Girl" public anger, from being appointed by her father. It does not seem to be an issue.

Even conservatives like Lisa personally and trust her to do what is right for Alaska.